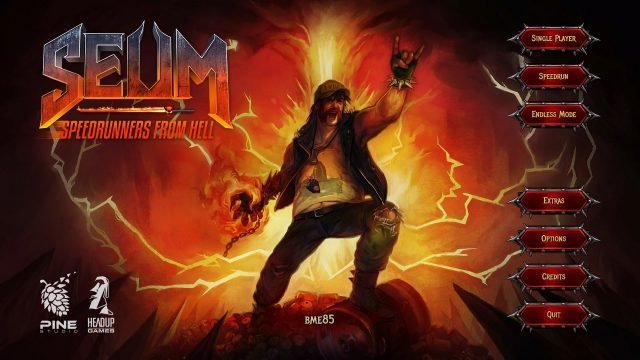 Is SEUM: Speed Runners From Hell Worth Your

What Should You Play it On?

This is a game that will truly challenge you.

And then you’ll crawl back. 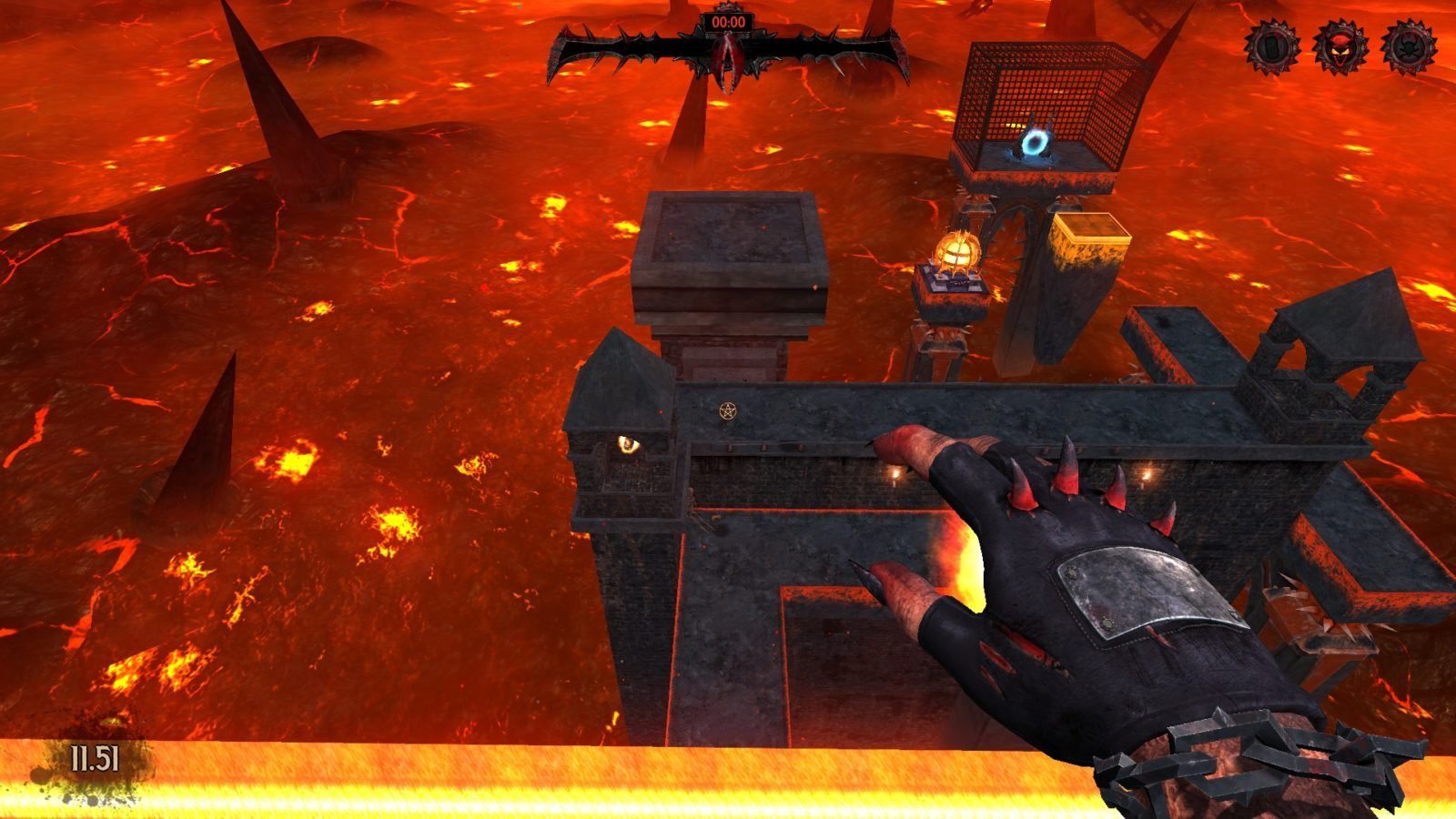 I’ve never played anything like this before. Then again I’ve never tried to speed run first person shooters or platformers like this. I know speed running games is a “thing” now, but it’s never really been my thing. SEUM, does away with most of the FPS stuff and just focuses on creating levels meant for speed running and breaking the spirits of n00b gamers. While not normally my cup of tea, SEUM manages to get it right for the most part.  Drawing even me into its style of play.

Let me backtrack a bit. SEUM: Speedrunners From Hell is a first person shooter (FPS) and a 3D platformer mash up about speed running. Levels go from simple to interesting to tricky to SCREW THIS LUCK BASED GAME to genius and oddly inspiring. Along the way there are power ups you mostly have to use to clear each level. These power ups change the way the game works and you will find yourself stopping everything just to try to master each new ability. Quite a few times I found myself lamenting that Pine Studios limited SEUM to just a speed running game. I get the feeling that Pine Studios could have created an immersive and brilliant FPS and/or platforming world. Instead here I am, trying my best to finish each and every level as fast as humanly possible.

Even with this limitation I often find myself admiring the brilliant level design. I also do this every single time I find myself in a level I cannot for the life of me “get.” Times like those it’s totally great to stop and look around. All that said, maybe it’s because it is a speed runner that the brilliant level design stand out even more. You need to be aware of your surroundings. Not only to understand how the level works but to try and shave seconds off the clock.

I was given a review copy of SEUM about a month or so before its official release. Since then I’ve sunk over five hours into the game and have found myself beating my head against the wall on several levels. I’m not joking:

There is trying to beat a level and then there is insanity.
This is starting to feel like the latter. pic.twitter.com/1JAApL6wS9

Some levels I swore I’d never go back to again, others I replayed immediately afterwards for fun. Then there are the evil stages. The stages that pushed me and at times almost made me quit. One such level took 376 tries before I beat it. 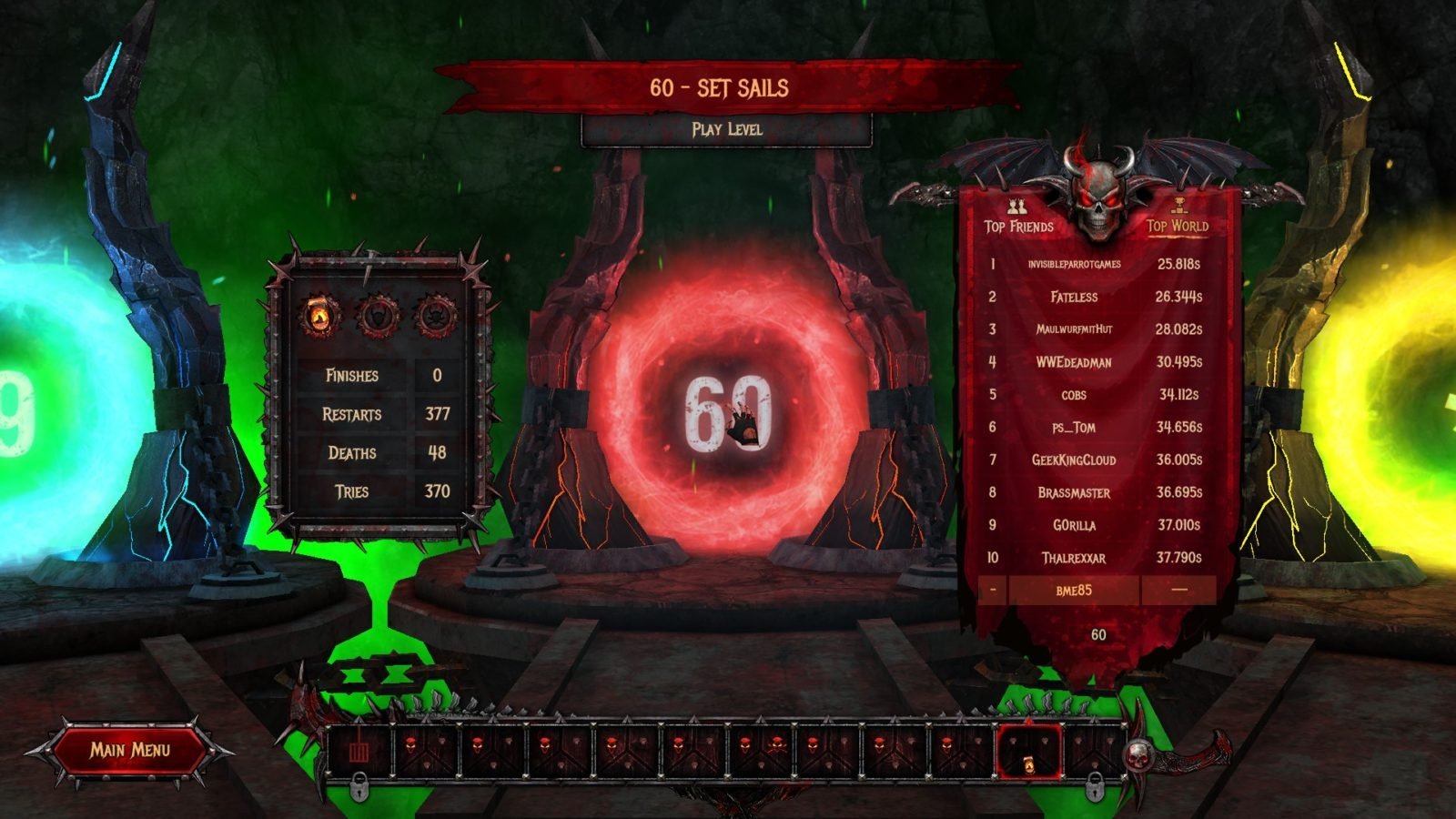 That’s insane. This sort of leads into my biggest problem. I was stuck on that level for a a long time. I considered just stopping and moving on to some other game. It was the last level of the floor so it was unskippable essentially a wall to my progress. I honestly don’t believe that these progress gates help the game at all. While I did end up eventually beating the level, it felt more like random luck than real skill. Yet it still was a sort of accomplishment. I beat it. I fucking finally beat it. The developer was happy for me. We were tweeting back and forth about my progress and I think they enjoyed my positive and negative reactions.

The funny thing is the game got easier and more fun after that. At least for a little while. In fact during one of the patches a much later part of the game opened up and I was able to clear most of the levels. Excited I checked to see if other areas were opened. Unfortunately they weren’t and I was stuck trying to beat that pain in the ass of a level. This made me especially annoyed because I had a lot of fun in those later levels. SEUM: Speed Runners from Hell is a game about speed running so why are we gated behind a traditional gated level system? I feel like this system does nothing but hinder the experience and would have the unfortunate side effect of causing players to quit the game. I think SEUM should allow players the ability to skip any level and come back to them at their leisure. You are allowed to skip one or two per level, but not these gate level. I don’t agree with that.

Now as I am writing this review I was stuck on level 70 for over a week. That is 70 out of 90 not counting the bonus levels. I saw no way of beating that level and honestly I found myself sick of trying. At least with level 60(40) I could see how I was supposed to beat the level, here at level 70 I was just totally lost. I’ve tried a few dozen times already, but I was kinda over beating my head against a wall. Again. I’ve gone back and have been replayed some of the earlier levels for fun.

Honestly as I’m writing this I felt a bit bad writing a badish review for a game I was really enjoying, for the most part. I decided to do what I almost never  do and tried looking up a walk through of the level. I did this before a few times and found nothing. The game was just to new. Well, as luck would have it there actually was a walk through for the level that made me want to delete the game and walk away…

That didn’t work for me. But it did show me what to look for to try and beat the level!

Angry, cranky, baby steps later I was making progress. I was getting it. I was getting further. I was establishing the familiar progress filled rhythm I’ve previously experienced in and fell in love with SEUM: Speed Runners from Hell.

And then I did it. 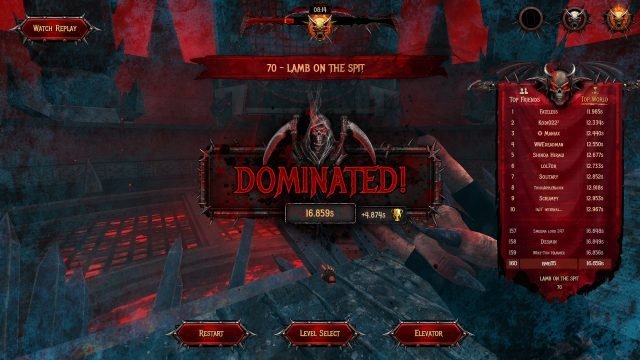 And I am back baby. Back smashing levels and trying to finish this.

Is it cheap sometimes?

SEUM will make you cuss out loud. Hell the developer Pine Studios knows this and has the main character complain about it in game when you lose enough. It’s like a back handed slap in the face because that is what the developer wants. It’s brilliant, fabulous and kind of a sadistic experience. Oddly I mean that as a compliment.

SEUM manages to nail that one more try feeling. Again look back and take in that I, a jaded reviewer who has a huge backlog of games to work through, devoted myself to replaying a single level 376 times to beat it. That is how well SEUM has it down. That it manages to do that in this day and age when it’s so easy to rage quit speaks volumes about the gameplay. 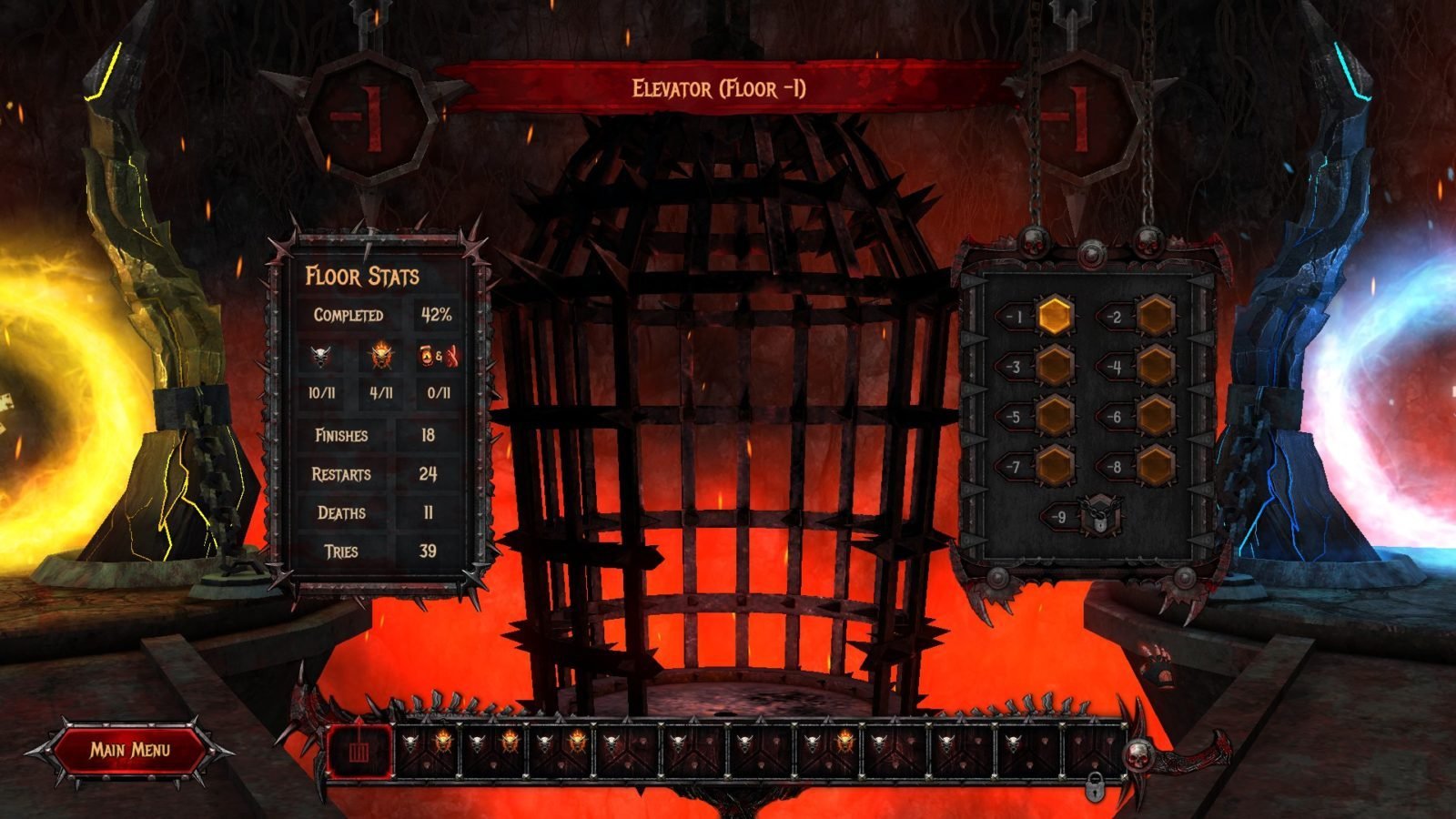 I want this game to succeed. Judging by the positive ratings on Steam for this game right now there are a lot of masochistic people who agree with me. Come into SEUM if you are looking for a challenge. Buy SEUM if you are in the mood for a tough 3D FPS-like platformer. Dive into it if you are a fan of speed running and really want to push yourself. Just don’t play this game or even bother to look it up if you are prone to rage quitting or want your hand held.

I think the most hilarious part about my experience playing SEUM is that I got the game around the same time I got Lovely Planet Arcade. As I was reviewing both games I found I had the total opposite experience. SEUM challenged me, frustrated me, but never bored me. Lovely Planet Arcade paled horribly in comparison. Whenever I review games I know that I need to take each game on its own and try not to compare it against any other game. Both games make use of limited art assets. While SEUM manages to make a vibrant world with limited resources, Lovely Planet Arcade always felt constrained and boring. I would find myself going to Lovely Planet Arcade when I needed a break from SEUM and found myself bored and annoyed immediately. The more I played Lovely Planet Arcade the lazier it and cheap it felt.

I’m not going to tell you that SEUM is perfect. It has room for improvement. I think a player ghost option needs to be implemented in game. I want to race myself in these maps. I don’t really care about the leader boards so much, but being able to chase after myself and or my friend’s ghosts running along with me through these levels would be amazing. Getting rid of the level gating would also be awesome. That said, SEUM: Speed Runners from Hell is a must play experience.

You need to experience SEUM on your own. Trust me. You will find yourself moving along with your character as you try and dodge swinging axes or holding your breath for entire runs. Hands sweating. Nerves on edge. SEUM: Speedrunners From Hell is a refreshing gaming experience that manages to be enthralling, engaging, and visceral. This is an experience that will wow you.

A free Steam game key was given to me to review this game.

If you enjoy these sorts of posts please try and help us by supporting us on Patreon.