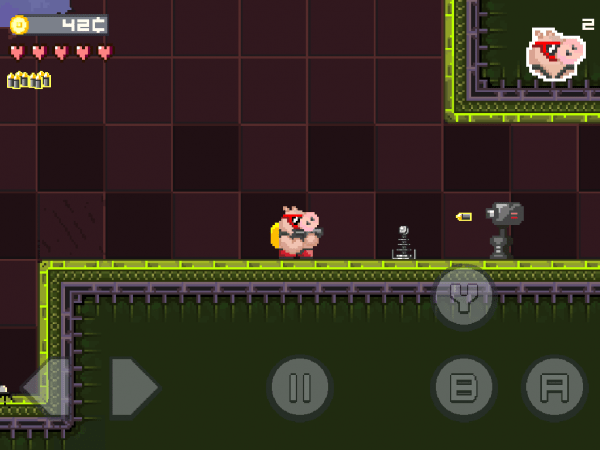 Meet 90% of your unfair deaths.

Is Ammo Pig worth your time?

It has potential, but it also has problems.

What should I play Ammo Pigs on?

iPad or extra large phone only. You are gonna wanna see whats happening on the screen.

Ammo Pigs is a frustrating and disappointing experience.

I went into Ammo Pigs with high hopes. I was following the developer on twitter and found out they were releasing a platformer that was old school with large levels.  Color me interested.  I spent the better part of today diving into old school platforming. And found a lot of old & new school bad.

Nothing is really “explained”. Now I know this is how it used to be, but its weird having a a limited amount of currency then a store pop up occasionally that sold mystery goods.  I had no idea what the health did until around midway through the game.  Why is it shaped like soda? Who knows. Does picking up regular ammo give your rockets extra ammo? Nope. Its a sort of trial and error that while old, usually was taken care of by the manual.  Here it’s trial and error.  There was gum in the vending machine that I never bought. It just showed up one level, but I was low on cash so I didn’t buy it. I still don’t know what that gum does. Then again I don’t remember what level that was.  They just blurred together. Things just got more annoying. 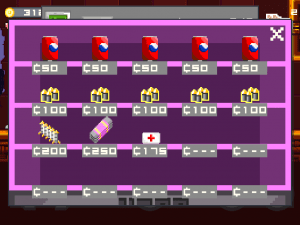 What does the gum do? Is it gum? Why is it so expensive?

Ammo Pigs has enemies that shoot at you from way out of visible range. I don’t know if this game was going for retro hard or artificially cheap to make it last longer.  I’m betting on the latter because that was uncool and not proper game design even 25 years ago. It’s not even like the bullets came at you slow like the missiles from Bowser in Super Mario or the bullets in the ship levels. These shoot fast you and you have no time to dodge them most of the time. THEN, mixed in the narrow hallway with these shooting enemies are another type of enemy that will launch itself at you quickly and kill you if you shoot at it and its heading in your direction.  This and INSANELY cheap placement meant for many, many cheap deaths. After a while Ammo Pigs comes down to not old school platforming skills, but League of Evil & Golden House level memorization and luck. Lots of luck.  That’s not fun. Then came the game breaking glitches that didn’t let me beat the boss the first 3 times.

Again you can beat this game, but be prepared for a good bit of level memorization and dealing with luck. But, with enough effort you will triumph.

Then Ammo Pigs ending… And lack thereof. “To Be Continued” then title screen.  That’s it. Cascadia Games has no current plans to add more content. (Twitter posts below) After twelve levels and a non ending. Finding this out was very frustrating.

What kept me playing? Well I was basically live tweeting myself playing Ammo Pigs. Surprisingly the developer @cascadia was responding to me as I was playing and tweeting. That was refreshing and gave me hope. The dev must really give a damn I thought. So I pushed on. Maybe I should have taken some breaks, because as frustrating as the game could get I really just pushed on hoping for more… Then the ending… Ugh..

How it plays & why it frustrates me:

Ammo Pigs is a short game that feels unfinished & unpolished.  The sounds effects and music of Ammo Pigs is great.  The looks, not so much.  Be prepared for very intrusive and distracting achievement progress updates taking up a good majority of the top of the screen.  This is especially maddening when you are wall climbing and trying to kill or avoid hazards.  This problem is a constant that follows you from beginning to end. You are just forced to stop and let the achievements happen.  Sadly they seem to linger for a few seconds.  For a while I tried to avoid the achievements to avoid this, but they are a major source of income in game.  So you just need to deal with this.

Ammo Pigs levels just seem to all blur together. I guess you are in some big factory, but nothing seems to change much.  The art design made me think there has to be another level select page past level twelve with something fresh to look at…. No.  No there isn’t. Ammo Pigs boss fights are just as unimaginative. There is some blade machine and some light bulb configuration that shoots out spinning blade enemies for some reason. That’s it. It’s nonsensical in the lazy way. The few enemies the game does has are interesting, but the bosses sadly just don’t go.

Next comes the state of Ammo Pigs control. They aren’t as accurate as some recent platformers like Mikey Shorts or League of Evil.  At times your double jump will just not respond.  It’s frustrating when you start platforming over areas that one shot you. Or when trying to avoid enemies.

Then we get to Ammo Pigs enemy placement. You need to memorize levels to have a chance at killing the enemies that shoot you from off screen before they do damage to you. A chance.  You will take tons of damage and die often because of things outside your sight range. It’s not fun. It’s frustrating. Next let’s get into the game randomly freezing up. Or the end boss flat our breaking. I tried beating him at least three (with two hard restarts) times before I put my iPad down and walked around to cool down. It wasn’t until I restarted my iPad again, really trying to give this broken game a chance that I was finally able to beat the final boss and not have the game break… Now after tweeting with the dev these are issues that will be fixed in time.

@Nardionet I suspect I know what happened bug-wise… must be a timing issue with when you die and it wants to come down… Will put on the list — Cascadia Games (@cascadiagames) February 6, 2015

To be continued…   AMMO PIGS DOESN’T HAVE A PROPER ENDING! The game doesn’t end. You game through 12 levels of frustration. Try to beat the boss, deal with bugs and then you get “To be continued.” And some pig gets drawn down in a cage…. It makes no sense and at this point it’s just a slap in the face to the player. I tweeted my frustration about this and the dev has the audacity to post this in response:

@Nardionet Haha. What would have made it a satisfying ending? — Cascadia Games (@cascadiagames) February 7, 2015

@cascadiagames is this finished? Is there a patch with more content coming or do you expect me to buy a sequel? — Nardio.net (@Nardionet) February 7, 2015

@Nardionet Hmm, I thought the commander being caged at the end as more of a plot tickler. No decision on content and no expectations. 🙂 — Cascadia Games (@cascadiagames) February 7, 2015

UPDATE After I posted the review and response tweets the developer responded with some tweets that gave me hope that things can tightened up and fixed with Ammo Pigs:

@cascadiagames it came off as really flippant. After the letdown of the ending it was the final straw. It has promise, but It has issues.

@Nardionet Dont worry about it. Got an idea for a minor tweak thanks to your thoughts. Going to make gum also pop out of crates sparingly. — Cascadia Games (@cascadiagames) February 7, 2015

@cascadiagames I gotta know. What is the gum?

There is promise here. I wouldn’t have spent a day with a game if there weren’t. At first I was very frustrated by some  of the obstacles and hazards I thought were too cheap. Over time I was able to learn how to deal with them. That’s a good thing. In fact I felt like a fool that I tweeted that they were too hard. But I was able to push through. I really loved that the dev cared enough to respond to little ole me. It gives me some hope.

The initial twitter conversation after I finished the game felt like a slap in the face and a 180 degree turn from the twitter conversations I have been having with the dev through out the day. Those conversations were really what was helping me continue playing despite the problems. Knowing there was a dev out there that was listening to the feed back and responding accordingly gave me hope.  Then came the bugs and then the ending and then the flippant’ish response and bam here is a bad Nardio review. I’m really hoping the upcoming patch/s fix the issues I have with Ammo Pigs. There is potential here.  Over coming challenges and what I thought were impossible situations really brought back that feeling at times of old school fun. Sadly Ammo Pigs was also bogged down by all the problems I stated above. I want to love this game. I want more from it. That’s a good sign. Its now up to Cascadia games to deliver.