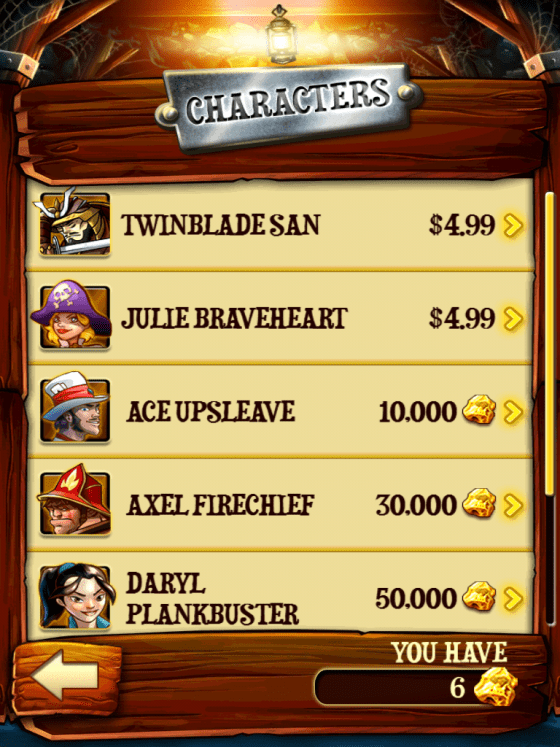 Getting the most useful characters will run you an additional $10.00… Really

Rail Rush is available on the iPad, iPod touch and the iPhone iOS 4.3 and later. With the dark passageways you are going to be riding through in this app I recommend only playing it on the iPad… Then only if it’s free. 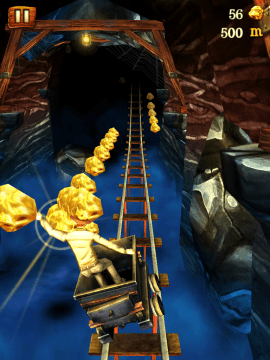 Rail Rush is an endless running game for the iOS.  It isn’t perfect, but it’s gameplay is just interesting enough to keep you coming back if you’re a fan of endless runners and you want to try something new for a while.  And only if it’s free. Unfortunately It doesn’t give you  the ability to progress your character as much as other endless runners.  On it’s own it’s decent and does the job for an on again, off again app. After a while most of the upgrades you get aren’t permanent and if they are, they cost real money. Lots of real money or insane amounts of gold. I really can’t recommend Rail Rush as a paid game. There are tons of cheap deaths thanks to item placements that block obstacles and there’s no real progression here. It really doesn’t have much to offer.

The controls for Rail Rush are tight and responsive.  Unfortunately, the cave itself is so dark that it makes spotting the tracks harder than it should be.  At times fog will overtake the tracks and it will look like you’re going into a dead end.  Most cheap deaths are because gems and large egg items are floating in front of you blocking off your ability to see a dead end ahead. 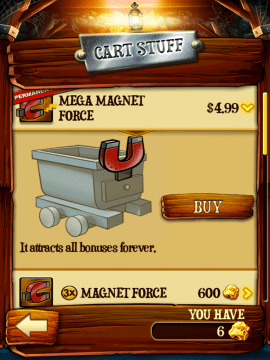 The only permanent useful upgrade costs $5.00.

Rail Rush is a paid app that’s ruined by greed.  The best characters to use in game cost 5 dollars.  The best permanent upgrade costs the same.  All of the other decent characters cost so much gold they aren’t really worth it.  The powers they give you are pretty lame, too.  Being constantly reminded to buy gold in a game where the best stuff costs real money is pretty annoying.

This wasn’t such a bad distraction of a game when Rail Rush was free, but now that it costs a dollar it’s really not worth it.  It’s designed from top to bottom to be a Freemium game.  If you are going to pay a dollar for an endless runner get Temple Run: Brave.  It’s better in every single way.