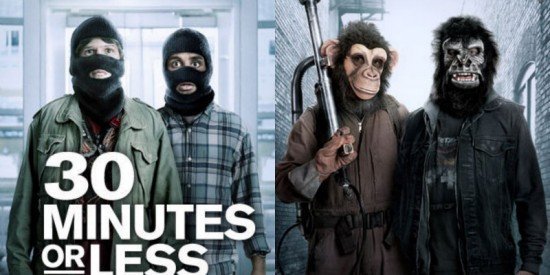 Our first review from Red Box is 30 Minutes or Less. It follows around loser pizza delivery guy Nick (Jesse Eisenberg from Zombieland) and two half-baked criminals Dwayne (Danny McBride from Eastbound and Down) and Travis (Nick Swardson from Just Go With It) as both try to somehow come up with $100,000. Dwayne is a dead-beat guy in his late 30s who has dreams of opening a tanning salon/prostitution ring. He’s just waiting for the day his dad, The Major (Fred Ward from Tremors) kicks the bucket so he can inherit what’s leftover of The Major’s lottery winnings. Travis and Dwayne spend their days daydreaming of having a pile of money, making home-explosives, watching movies and going to strip clubs. One day at a strip club, Dwayne complains about how The Major is throwing away his lotto earnings and his favorite stripper suggests that Dwayne kill the Major. For only $100,000 she can get a hired gun Chango (Michael Peña) to do the job and then Dwayne is free to collect and get a jumpstart on his dream business. Of course, since he doesn’t have $100,000 and doesn’t want to be implicated in the crime, Dwayne and Travis scour the small town for the scapegoat. Enter Nick a hapless pizza deliver guy who gets kidnapped, strapped with some bombs and given the ultimatum of $100,000 in ten hours or the bomb vest will detonate. The rest of the story follows fairly predictably with Nick bringing in his best friend Chet (Aziz Ansari) on the adventure and a little romance between Nick and Chet’s sister.

“30 Minutes or Less” is definitely a fun movie although there are some annoying parts. My least favorite characters were Chet and Chango. Both had incredibly annoying voices, you know the kind – nasally and high-pitched. While Peña didn’t play a huge role in the story, Ansari was a main character. There were times where he was funny, but more often than not, it seemed like he was just trying too hard. I did like the interaction between Eisenberg and Ansari, but the rest of the characters were all kind of…meh. McBride seems to play the same characters in almost all of his movies now: a loser jerkoff. Still, for $1 at your local Redbox, it wasn’t a horrible way to spend a couple hours. Plus the commercial at the end almost made up for all the un-funny parts of the movie.

For those that do not know about the wondrous Red Box, here’s a brief description: It’s basically like Blockbuster except you can rent movies for $1/day. As long as you return it by 9pm the following day you won’t be charged. While there’s certainly other movie rental things like Netflix that allows you a monthly subscription and no late fees, the nice thing about Redbox is that if it’s around your area, you can get a movie whenever you want and it pretty much forces you to watch that movie within a day or two. Plus, there’s no monthly charge so you can rent and pay for the movie whenever you feel like it, because, let’s be honest, how long have you been keeping those same two movies that you rented from Netflix?