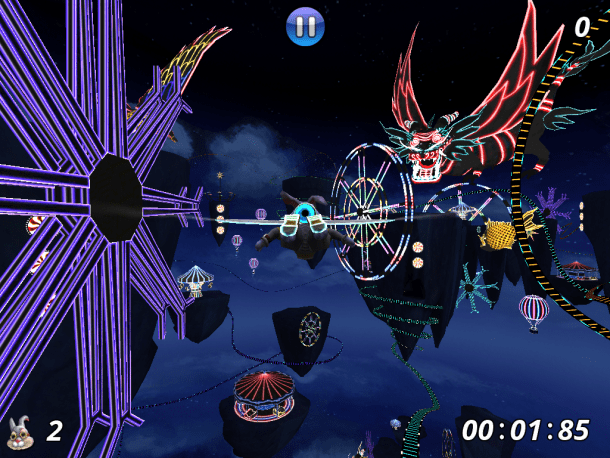 This is a very pretty game.

Cloud Spin is iPad 2 and up only. 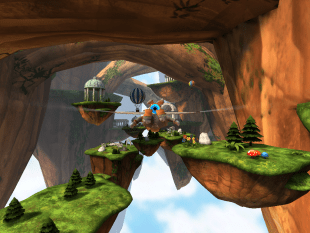 You can tell they put a lot work into the levels.

Cloud Spin is about a flying Rabbit whose life is ruined by bad controls and boring point A to B level design.  The one bright spot of this game is the amazing graphics. This is one of the best looking games I have ever hated on my iPad. I want to love Cloud Spin game because it is so pretty. Sadly the horrible controls and boring gameplay just make this $1.99 worth of disappointment.

Skytrain Studios has already updated the controls twice  for the Tournament mode, but they are still not good enough. Even when things are working the gameplay is just boring. The levels feel too short. As you get to the second to last level in the Tournament mode you feel like the game isn’t close to being finished. Unfortunately, to open up the last level Skytrain has made it that you have to go back and earn gold stars on all the levels before it. It’s too bad Cloud Spin isn’t interesting enough that I want to get the gold stars. Sure the controls and scoring have been updated a bit to make things more playable and easier, but there really isn’t much replay here.

The second mode – Free Flight – is so bad you’ll most likely immediately delete the app off your iPad. How this was released at the asking price of $1.99 is beyond me.

Cloud Spin is a game that’s in flux. It was recently released almost unplayable. As of right now we are two updates in as Skytrain Studios tries to salvage this game from bad reviews and horrible controls. After these updates the game controls better, but still doesn’t have the level of polish necessary to deserve their asking price. Cloud Spin just wasn’t ready for release on iTunes.

Avoid this unless it’s free.  Even then, unless they patch the heck out of it this feels like a lost cause. 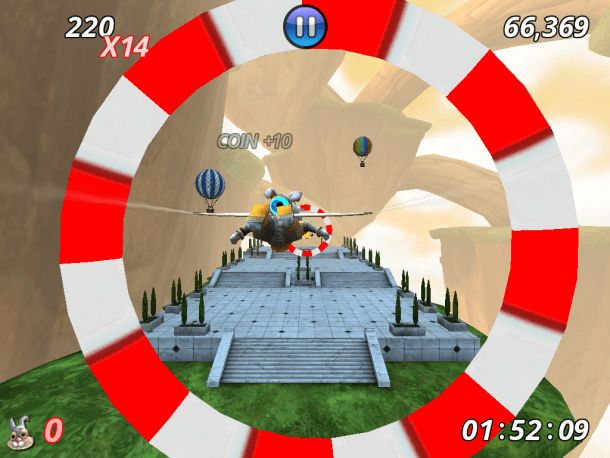 Cloud Spin has two modes Tournament and Free Flight, neither are worth your time. Tournament has you moving forward using your finger to move your character . Did I mention that the character is right in the middle of the screen? What this means it that your finger ultimately blocks your view of what you need aim for and what you need to avoid. To make matters worse, both control options available are bad. Neither gives you the necessary tight control you need to speed through this game. You will find yourself constantly taking your controlling finger off the iPad and centering it in the middle. It’s pretty weird and pulls you out of the game each time.

Unfortunately Tournament gameplay is also pretty boring. Collision detection also seems off. There are lots of times I know I flew through gold coins and stars but did not receive credit. The speed up mechanic makes controlling the game even more annoying.

Free flight mode is just frustrating and horrible. You find yourself sort of flailing through the sky hoping to smash into the objects you need to collect just so you can die and move on to the next. Everything about this mode is just frustrating. It wasn’t until I finished the second level of this that I deleted the game in frustration.

Cloud Spin feels nowhere near ready for release.  How Skytrain Studios has the gall to charge two dollars for a half-baked broken experience is beyond me. Besides the good looks, thanks to the Unreal Engine, there isn’t anything good about this.