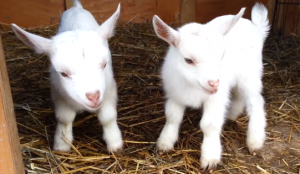 Today’s cute of the day is this epic battle between two baby goats. Yes, you may die from cuteness overload. While they might not be damaging each other now, what they are doing is practice fighting. It’s kind of like how kittens will attack pretty much anything that moves. It hones their skills for when they actually do fight. Considering that these little guys are on a farm, it’s more than likely they won’t ever have to fight each other over a mate. Still, those instincts are there. it just looks cute now because they’re babies.