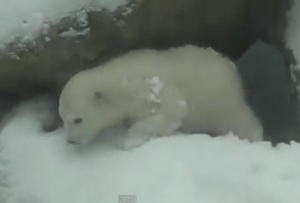 You’d think that when you’re living in an ice and snow-covered land that you wouldn’t be so excited to see the snow. This little polar bear though seems to be having the time of his life. While he’s definitely cute and cuddly now, polar bears are pretty notorious for being some of the most mean-tempered bears out there.  Combine their temper with their size, they are the largest bear along with the Kodiak’s, and you’ve got yourself a pretty dangerous animal. Still, when they’re cubs, they’re pretty darn cute.