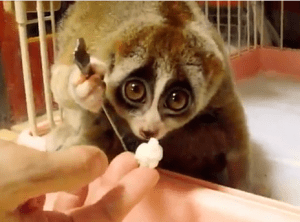 Normally I’m not really a fan of primates, but this little guy with its huge eyes kind of won my heart. A Loris is related closer to lemurs than actual primates. They do share the opposable thumbs in order to grasp stuff like that fork. The Loris is native to South and Southeast Asia and lives on an omnivorous diet. While these guys certainly are adorable, their bite is toxic, a rarity among mammals. There are 5 species of lorises, all either vulnerable or endangered due to habitat loss and an unsuitable demand for them as exotic pets. As cute as they are, these guys are still wild creatures THEY ARE NOT PETS! Still this cute video the day will make you go awww and wonder why you’d never heard of a loris before.

PSA ANNOUNCEMENT: Because the lorises are so cute there is a huge illegal exotic pet market in Asia. Many of these animals are being poached then sold illegally. Because their bite is toxic, the poachers rip out their teeth before selling them as pets. For those that do not die during the process the majority contract an infection and then die en route to whoever bought them or once they have arrived at the buyer’s home. Do not support the Slow Loris pet industry.