Cute of the Day: Whack-A-Kitty 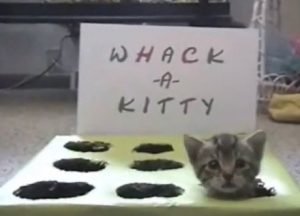 Today’s cute of the day is this new game called Whack-a-Kitty. Similar to Whack-a-mole, when the kittens heads pops out of the hole, hit them gently with the soft mallet. You lose the game when all of the kittens escape. Now, there are plenty of people out there that would scream “ABUSE” but come on. The kittens don’t seem as though they’re frightened or angry. Heck, they seem like they’re having fun as well. I kind of wish I had thought of this when I had kittens!