Hello fans of clicking a lot and randomized loot.  Today Blizzard was nice enough to show off their newest work: Diablo 3 Reaper of Souls.

I have to say I’m not too big of a fan of this trailer. I just hate how Blizzard makes a crappy lead in story.

The Soul Stone was hidden for seconds…from anyone who could defend it. And looky here someone shows up for it. It’s not like this is the most destructive object in the world that happens to hold a being who almost destroyed heaven and earth multiple times.

Of course we have some Bad Guy whose mere aura can melt people. It just seems like too much, that we won’t see in-game. I was wishing they moved the story forward from the game’s other characters. Maybe had Maghda come for the soul stone. It would have made more sense. It would have made more sense if the group of wizard-killing assassins chased after the wizard who worked for Maggy. Imagine it. All of the heroes are fighting these badass assassins it goes without saying that the distraction would make it easier to steal the soul stone. That would have had me.  But I’ll wait and see.  While the story itself was lacking in my opinion Diablo 3 did have some interesting gameplay for short on and off sessions.

Now the kewl new person to join the cast! 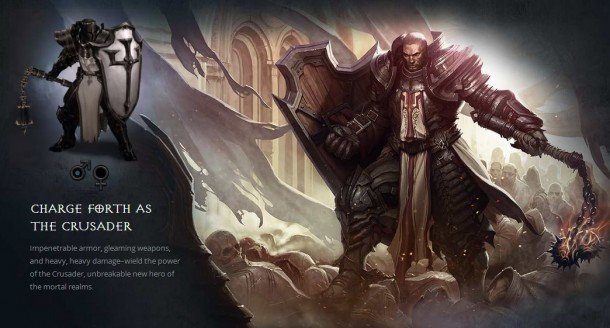 So far we have been lucky enough to find some videos online showing off the new player class: Crusader.  Crusader seems to be a mix of a WoW’s Protection Paladin, the old Diablo Paladin, and Torchlight 2’s Engineer.  So far it seems like a pretty darned interesting character, one that will be very a welcome addition to the cast. I’m just hoping a few of the Crusader’s moves will make it to it’s WoW cousin.  I would totally love that shield Bash on my pally tank.

Here is a great video from Down4life showing the announcement and play though preview of the Crusader in action and his abilities explained!

Seeing the Crusader in action definitly has me wanting to try this guy out.  The only thing that has been bothering me with this video is the lack of gold dropped by all the dead baddies.

Is Blizzard going to reduce players ability to farm gold with the expansion?