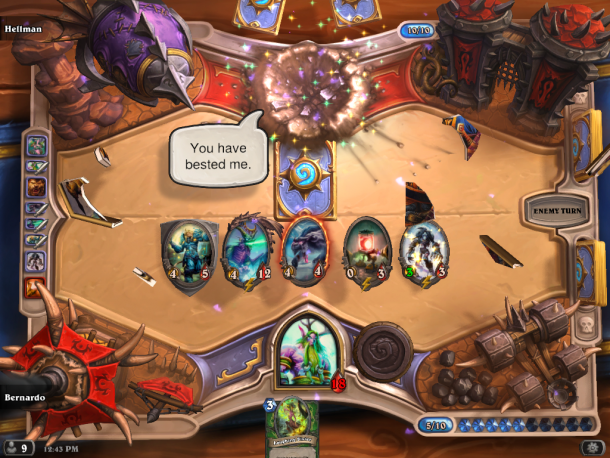 Hearthstone is easier & deeper than you could have imagined.

Is Hearthstone Worth Your Time?

What Should I Play Hearthstone On?

Right now Hearthstone is PC, Mac and iPad only. It’s coming soon to Android tablets. I had a blast playing this on my iPad a few days ago. On my PC I feel that Hearthstone works best in windowed mode, so that I can do other things as I wait my turn. Overall, I feel Hearthstone is right at home on the iPad. 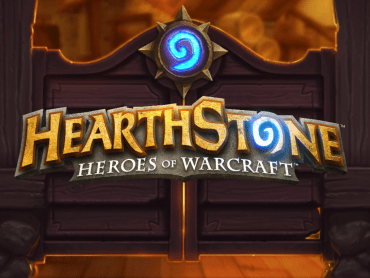 Hearthstone: Heroes of Warcraft is an amazing card battling game that is set in the interesting World of Warcraft.  But that honestly won’t really matter to anyone else who plays Hearthstone besides World of Warcraft Fans because Hearthstone is its own game.  You don’t need to know the story behind the game here or anything about the characters.

Hearthstone is very easy to learn and almost impossible to master. Don’t worry about never having played card games before because the introductory tutorial is amazing & perfect. You don’t need a crazy rule book to understand the cards either. All of Hearthstone’s cards are self explanatory. By the time you are done with the tutorial you will be ready to play. Hearthstone is a free game with the option to buy extra packs of cards. Don’t worry though, there is never any pressure to buy. As you play the game you will earn game currency that can be used to buy cards.  Trust me, you can play Hearthstone and get a champion level deck without spending a dime.

Hearthstone is a multiplayer online only game, so if you are getting this in the hopes of having something for your commute or when you will be offline you are sadly out of luck.

Almost every single person I’ve gotten into Hearthstone absolutely loved it.  Hearthstone is perfect for non gamers and hardcore gamers alike. Thanks to the lack of violence in the game and lack of a chat function, it’s also pretty good for younger gamers. As always please watch your kids when they play games. There is still the chance they could end up buying packs of cards if you aren’t a careful parent.

How it Plays & Why it Works: 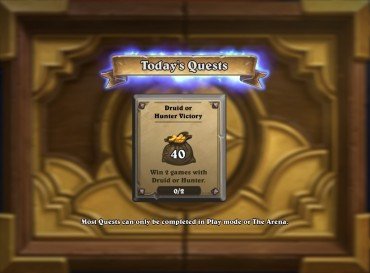 First off Hearthstone is totally free.  You can earn every card in the game just by playing the game.  I’m not talking about becoming a slave to the game to get cards. Blizzard practically throws in game currency at you left and right. There are in game quests that just require you to play. There is also a mode that you can pay cash or in game currency to get into called Arena. In Arena you are able to win game cards, packs, and even in-game currency.

If you do want to spend real money on cards here you aren’t guaranteed to get better cards than someone who just earned their own deck by playing though buying cards outright is a faster way of building decks.  Thankfully Blizzard has kept the cost of buying packs of cards fairly low so you if do splurge on a few packs it won’t set you back anywhere near as much as buying physical cards for the mainstream card games. Again, compared to the absolutely insane costs of other card games Hearthstone pack prices are a steal.  Normally I see Pokémon and Magic The Gathering physical trading cards going for anywhere between $7-12 dollars a pack here in New York City. In comparison you can get seven Hearthstone packs for $10.00. This leads me to my next pro for Hearthstone:

One store. Only Blizzard sells Hearthstone cards. Growing up as a comic and card collector I was always subject to the whims of the store pricing. When I discovered Pokémon and Magic the Gathering, I found that you could almost never find a pack that went for retail. To make matters worse for physical cards, you had to deal with rampant counterfeiting. Meaning that you weren’t even sure if what you were buying was legit. With Blizzard in charge, we don’t need to worry about middleman mark ups. 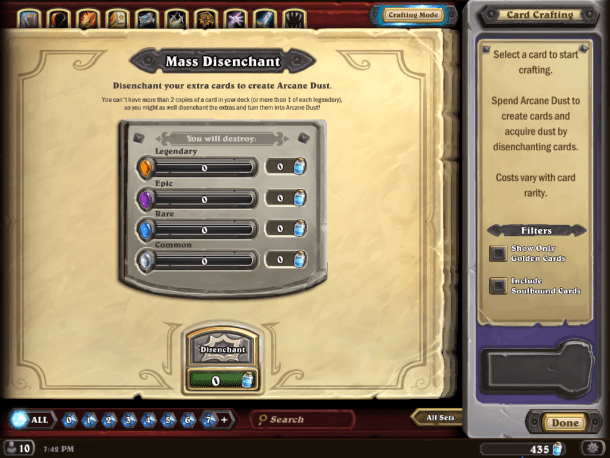 Never any wasted money or cards in Hearthstone.

What about getting cards you don’t need?  Well Hearthstone gives you the ability to break these cards down into Arcane Dust. Arcane Dust is just a fancy term for Blizzard’s card building material. With enough of this dust you can craft any of the cards that you want to have. Let’s say you have no interest in having a particular class deck, let’s say Hunter.  You can then turn every Hunter card you get (Besides basic default starting class cards) into this dust that you can use to make cards for the class decks that you do want. Personally I dislike playing with the Warrior class. I hate the Avatar and I just don’t enjoy the play style. So every extra Warrior card I gets the Arcane Dust treatment. In any other card game I would be stuck with these cards if I couldn’t trade them.This means that sooner or later you can technically make every card you will ever need in game. Every single class deck has the ability to utterly dominate. Really. You will meet players whose every turn was made just to destroy yours. You will have no chance. You will have no hope. The cards are simply not in your favor. That really sucks getting used to, but if you are really interested in playing Hearthstone, or any card battling you need to get used to losing. A lot. Some classes seem to have more cheap cards than others, but they are all beatable, if the cards are right.

Every class in Hearthstone plays differently. Since every class has a unique power and class cards, there is plenty of depth to be found.  Yet they are always easy to get play. If you are having trouble understanding how to play with or against a certain class, the practice modes are priceless.  Thanks to the daily quest system you are encouraged to play different classes to earn in game currency.  Even better, you always have a choice between two classes to accomplish the quest.  You never feel like you have to play a class to move ahead.  It’s because of the daily quests, that I feel I’ve become a better player.  Practicing and playing with each class, helped me learn how to defeat them, and what to expect when playing against them.

Hearthstone lets you play the way you want to play. Besides class cards, there are lots of general cards that you can use to shape your deck in any way you like.  I’ve see Priests with Pirate Decks, Warriors with Tank Decks, and Warlocks with Dragon Decks. In Hearthstone, how you play is up to you.

Online only.  So if you live someplace that has a spotty connection, or you want to play this in the subway on the way to work, you are totally out of luck. Disconnects equals losses. Accidentally shutting off your iPad means a loss.  In casual matches this isn’t a big deal, but in the Arena or Ranked play this is heartbreaking.

Hearthstone is a randomized card game. While the deck you choose remains constant, the order in which you draw cards is not. This means you are subject to sucktacular law randomization. Meaning there will be many, many games where you get nothing but the absolute worst cards possible, all in a row. You cannot, at will, pull out the card you need.  Some new players just can’t seem to wrap their heads around that. Trust me, there will be a few games where you won’t either. 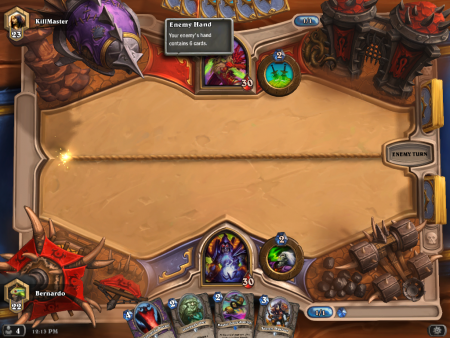 You can’t block players.  You will inevitably come across some players who let every single match time out even after making their moves. This totally ruins the game experience. Even if they are totally dominating you they will wait out every single turn. This has been an issue since the closed beta and sadly it continues to be an issue now. The worst part is you will often find yourself against the same players for some reason. Knowing that you are going to start yet another match against someone with nothing better to do than draw out every turn just makes you want to stop playing. Sadly, that’s the free win strategy these jerks are going for.

The only thing that helps in PC mode is to play in Windowed mode so that you have something else to do as you wait. On the iPad, you can’t just switch apps, so the best thing you can do is have some reruns on TV or start cleaning as you go against these people. I’m hoping that as the iPad version of Hearthstone rolls out around the world, we will see less of this, but it’s still an annoying issue.

No trading or selling cards!  That’s right, if you have six cards that your best friend or fiancée wants you cannot trade it. Hope to make a few bucks by selling rares? Nope, not here. While I’m not entirely keen on the no trading rule it makes sense, and helps keep Hearthstone accounts secure. Battlenet is already a very safe service, but making it that you can’t trade cards, gold, or Arcane Dust removes a lot of the motivation some bad players might have for hacking accounts.

Hearthstone is the greatest card game I have ever played. Best of all Blizzard is paying attention and is  constantly fixing issues and making sure nothing is too over or under powered. If you want a great card game, or just want a fun multiplayer game that can be played while relaxing on the couch or in front of the TV you need to try Hearthstone. 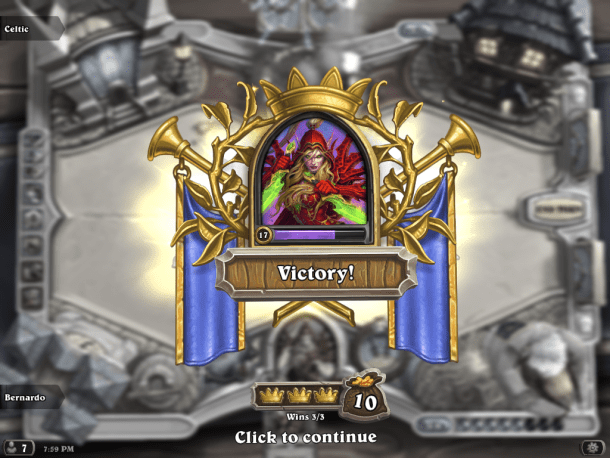