Is Teku Teku Hero Worth Your Time?

What Should I Play Teku Teku Hero On?

Teku Teku Hero is a universal app for iOS 7.0 and Android. You get the same great experience on all devices.  This is one of those rare gems that is installed on my iPhone and iPad.  Teku Teku Hero is perfect for any device. 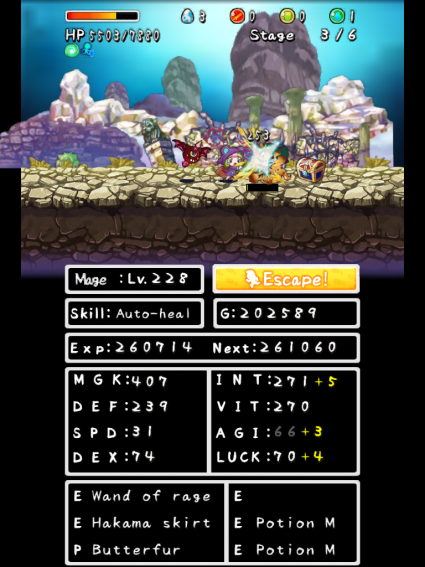 Teku Teku Hero  is a very interesting role playing game experience that is simplified for the busy gamer on the go. In Teku Teku Hero all you have to do is equip your hero, select the level and watch her/him walk through levels destroying baddies, leveling up and collecting loot.  After every battle you get a summary of all the loot you have earned.  Interestingly enough the game takes a genius turn plot wise towards the end that just floored me.  You can set and forget it since the only thing you control after starting a game is your ability to escape.  This can be frustrating at times, but that’s the game.  Plan as best as you can with respect to equipping items and pets that give you stats.

The downside is Teku Teku Hero has an energy system. Every once in a while you are going to have to take breaks to let your energy reset. There is an option to refill your energy for one dollar, but it just doesn’t seem worth it to me. I still enjoy Teku Teku Hero a lot and recommend it to friends who want a simple game they can play while watching TV or doing work. I am over level 900 after playing this for a few days. I’m addicted to it and if you’re a fan of simple role playing games I’m sure you will be too. 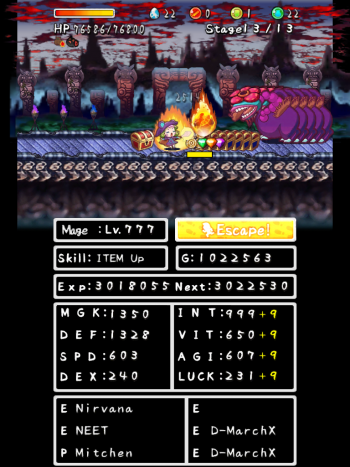 O yes you will grind here.

Set and watch gameplay makes this perfect for gaming while watching TV or doing laundry. Teku Teku Hero also encourages you to grind – something you’ll need to do any way – by making it possible to just run the same level multiple times in a row. Wonderful art, great animations and great retro music and sound effect just make this an endearing game.  Just when I thought the game could really use some plot Teku Teku Hero threw a curveball at me. I enjoy role playing games for their ability to make me feel as if I’m making character progression by my efforts, I dislike them for having to have so many monotonous battles.  Teku Teku Hero is sheer genius. It never got boring. Maybe that was due to the fact that I had only so many moves available to me at a time.  Maybe it was that I had the ability to choose what stats I wanted to level up.  There also is the amazing item drop rate that made sure I rarely ever had to actually buy an upgrade or items. When I did need to, I had enough to get the 999 defense armor that cost 999,999 gold before the game was even finished. You don’t have to worry about a special buy in only currency. Soon after buying my 999,999 gold armor I was able to get my 999,999 gold weapon the very next day.

The more you play the stronger you get. There is always immediate character progression either through leveling or just making it further in the game. Being able to unlock, level and find stronger pets that aid you in various ways in battle is an awesome touch that really adds depth to this deceptively simple game.

Teku Teku Hero is a freemium game, but it never forces or pushes in app purchases on you.

The experience and coin doubler is insanely overpriced at five dollars. Teku Teku Hero can definitely benefit from additional enemy designs.  The reskinned versions of what you see in the game, while cute, quickly become tiresome. The same is sadly done with a few of the bosses.

I wish there was an option to pay two dollars or so for the ability to half the time it takes for your energy to refill. As is, waiting over an hour at times for fights just seems like too much.  Then again this is a freemium game that has no ads so I’m not that upset by the waits.

The very last boss fight seems to be kinda based on luck. I was wearing both my 999 staff and armor and was level 999 when I beat the last boss twice, but lost a couple times on replay. That’s kinda annoying. After you really beat the game and have reached level 999 there isnt much replay value as far as I’ve seen.  But again, I was into this game enough to make it to max level and get the max gear.