Kingdom Rush Review for the iPad 2 Yes, excellent tower defense game! Check out our review of the update and how to get 85 Stars!

Get the app at the iTunes store!

This review is for the iPad, but there is an iPhone version as well. I just can’t get it…. Its just too addictive.  I can’t have this game on my iPhone and expect to keep my job.  There are also Android, Google Chrome versions of the game available online and last but not least Armor Games has the game on their company website.

So far I have beaten the game on the iPad 2 and as a Google Chrome app. The iPad version is great for basically anytime you want to fire a game up and the Google Chrome app version worked great when I was at an Aunt’s house having serious game withdraw when my iPad’s battery died…..

What Kind of Game Is It?

It is a tower defense game.

Wow. This has to be one of the most fun, addictive games I have ever played. I’ve neglected my fiancée a lot since downloading this. Thankfully she likes to sit next to me, watch me play and point out when enemy units are sneaking by. Cute, funny, challenging, and insanely addicting.
This is my all time fave iPad App. Yes, it’s that good.

How Does it Play on the iPad?

The controls are perfect, the character animations are beautiful and the combat is spot on.  At no time did I feel like this was a cheaply done app.  What really surprised me was the voice work.  Every tower has its own unique units with corresponding battle cries. Example: “This is my Boom Stick!” Awesome.  As you upgrade, the battle cries for the towers change, so it never really gets old. The layout of the monsters/units/towers/heroes on screen is perfection.  Nothing really ever gets lost on screen. Generally, tower defense games end up having too much going on at one time on the screen to, here that isn’t ever the case.  The design is just amazing. This is level one….. It gets crazy, but it’s always cute.

The game sucks you in with brilliant design and sound, entertains you by lots of movie and game shout outs and unit upgrades as you progress through each level.  As you start the game you are given the bare bones units and towers with tips explaining the different towers and monsters. The tutorials are short and concise so you never really feel like the game is overly complicated or simple. Thanks to great pacing and the freedom you get later on all the levels are equally as fun to play in each play through.  The best part is you can bring your upgrades back with you to replay levels.  Sure some towers work best for some situations, but after a few playthroughs and upgrades you want to go back and try beating each with different units and strategies. 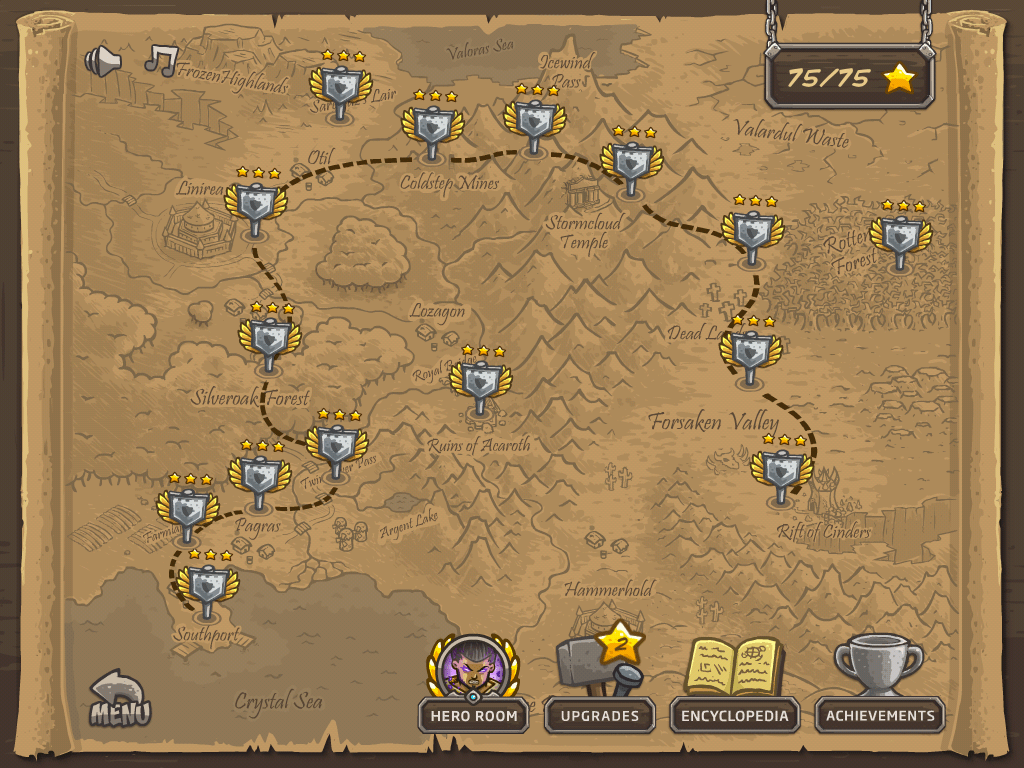 The 75 Stars took me a few months…. totally worth it.

Each stage has five star points you can get: Three by beating it with only letting the minimum amount of baddies pass and two more for going back and beating challenge modes.  Some Challenge modes are cake and others have you contemplating the hole your iPad will make in the wall if you throw it.  They are all beatable but some will frustrate you more than others. You then use those points to upgrades towers, units and, more recently, purchase heroes. 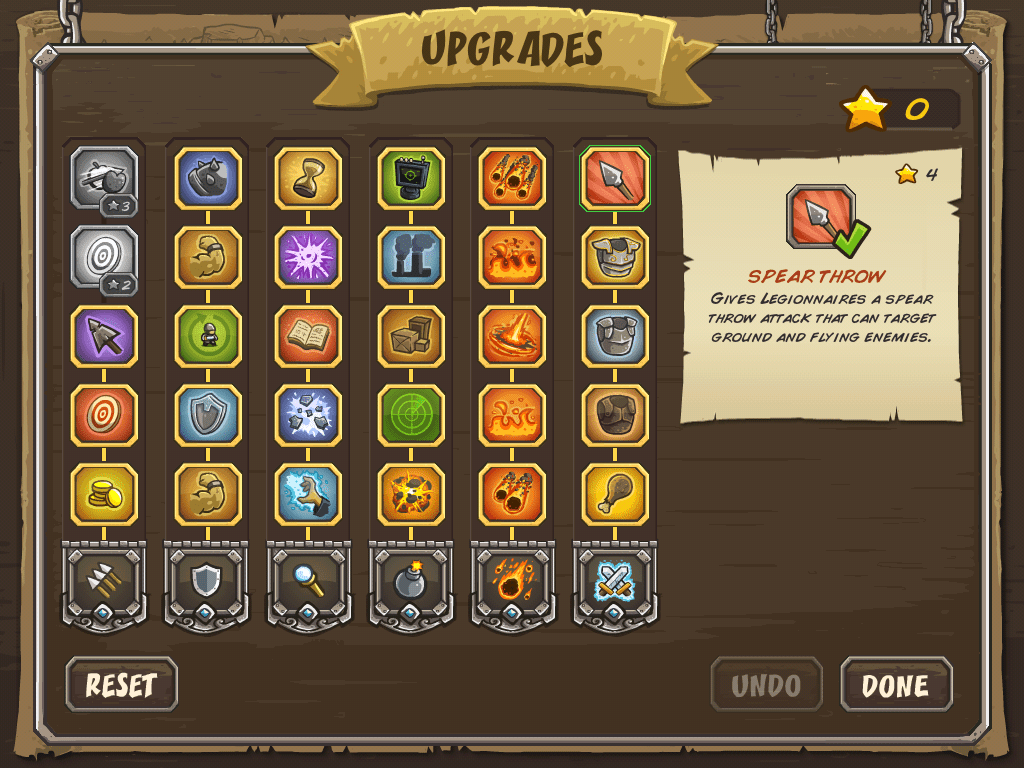 My Advice: Level your reinforcements first. They are the real heroes of the game!

Iron Hide Game Studio has excellent support for the app. Three additional stages have been added since its original release.  Their popular Facebook page updates tell fans of future work with updates and gameplay fixes. You can be sure that this isn’t going to be an app that gets left to die.  If there is a problem with an update rest assured the update that fixes it will be posted ASAP along with an explanation and an apology.  This developer cares and it shows. 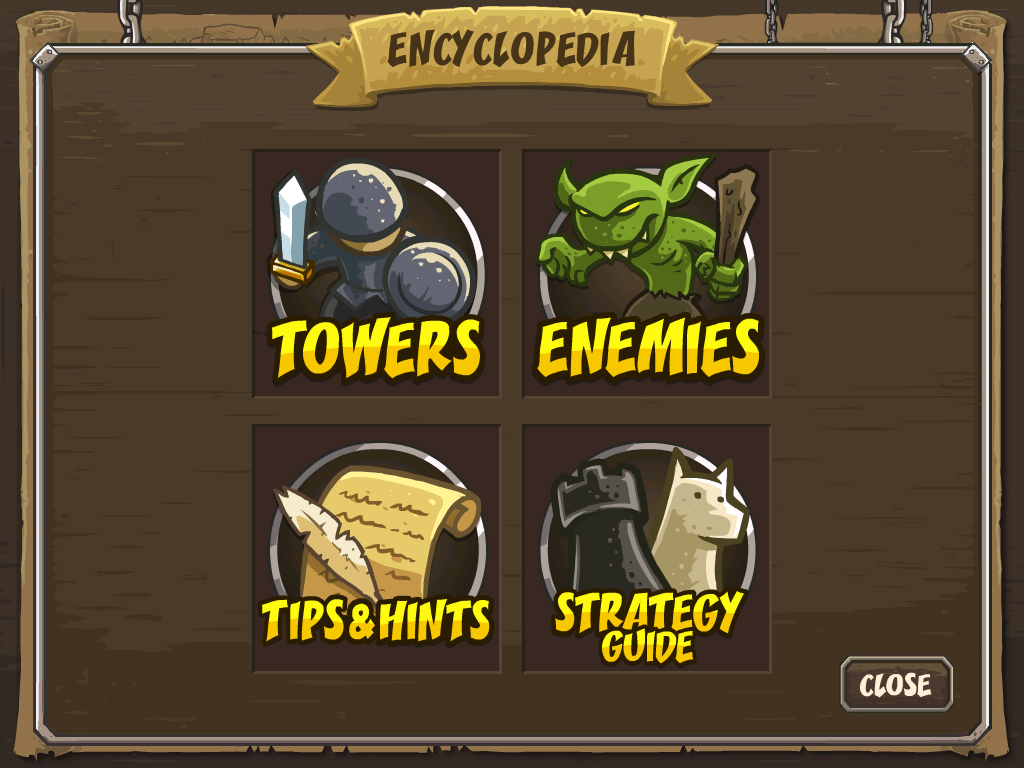 Read up on the baddies kicking your butt.

The newest update introduced a new stage with corresponding stars, challenges and Heroes.

You don’t need them.  You can beat the entire game without using a single one. For most  “Kingdom Rush” Die Hards heroes are for when you beat the game, beat all the challenge modes, and re-beat everything with different unit set ups many times over…After all that, then you delve into the hero class for a new gameplay challenge. GETTING HEROES DOESNT MAKE THE GAME ANY EASIER.

You get three free heroes and you can buy three others for .99 cents a pop.  Heroes themselves add to the fun of the game and to the challenge.  They all have different gameplay styles, strengths and weaknesses.  They will always start each level at level one.  As they hurt more baddies they level up and get new attacks and get stronger. It makes sense that you would want your hero to attack as many bad guys, but some are more resilient than others. If you’re not careful, they end up dying. Luckily, if they do die, they aren’t gone forever they just take a minute or so to respawn.  Heroes add more replay value to a game that already has more replay value than most console games.  You want to see your Heroes level up to see what sorts of cool things they can do, and as they level, you begin to care whether they live or die.  Having said that they can die pretty easily if you just ignore them.  As with any other unit in the game, heroes are only as good as the units surrounding and supporting them and they do their best if you keep an eye on them. I have to say I don’t hate any of them, in fact they’re all fun.  I have tried to use them all and I think the three paid Heroes are just as good as the free ones.  I don’t mind the in app purchases. I feel with all the replay value the game gives me, the $3 additional dollars these heroes cost is worth it.

No one hero is over powered.

Rotten Forest starts to feel cheap in regards to difficulty. The tree rush that happens towards the end is just too much. It feels more like luck and chance than skill to get a perfect game or even three stars. There are a few challenges that also feel that way in the game. It’s all doable… but the Rotten forest really had me angry.

That being said I still wholeheartedly recommend this game. 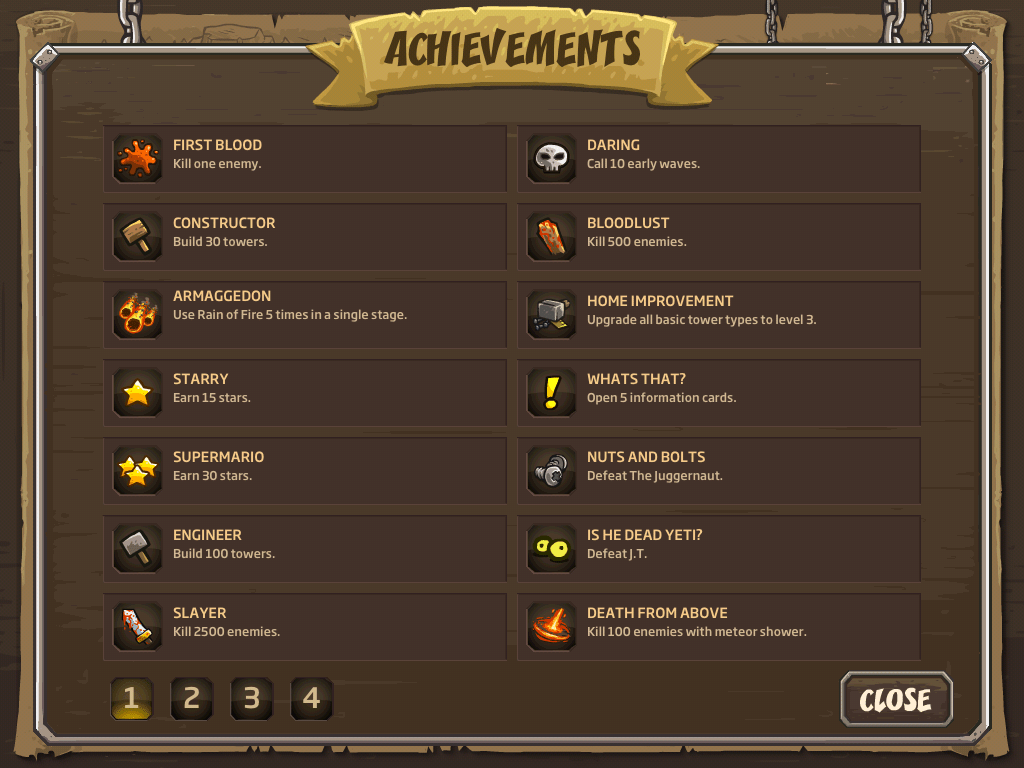 Gotta get em all.