Lil’ Kingdom Review for the iPad 2 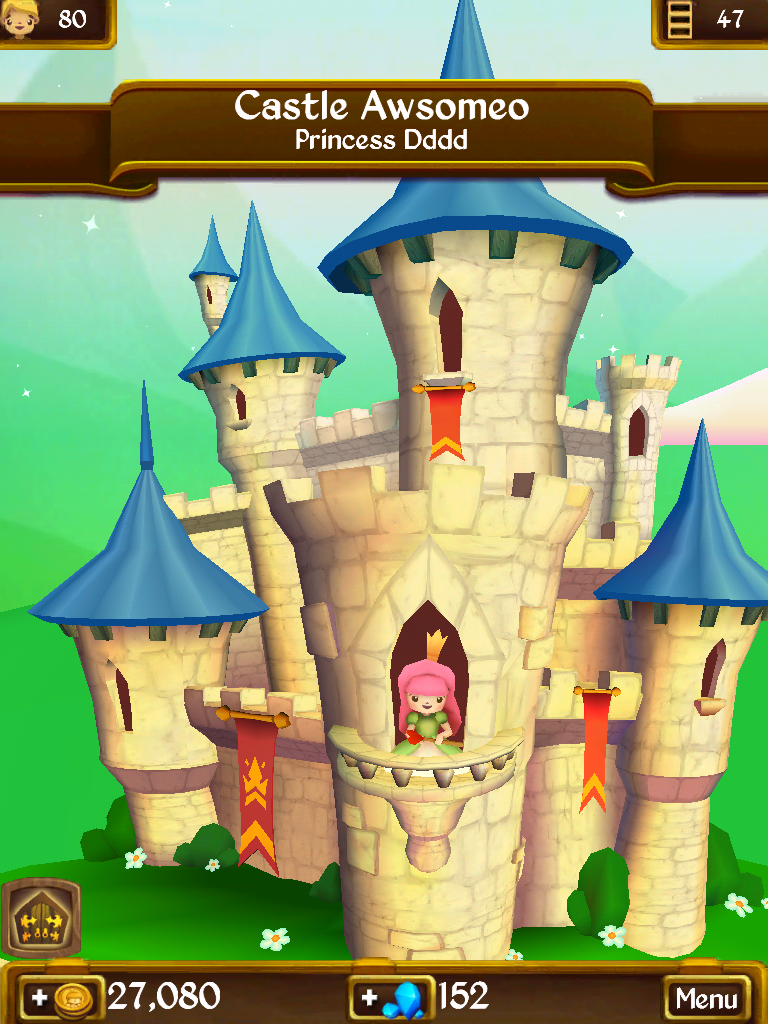 If you like cutesy tower building games then yes. Plus, it’s free to play so that’s a huge plus!

It’s available for the iPhone, iPod Touch (3rd generation), iPad 2 on iTunes and available for download at Google Play. It’s not really a graphics intensive game, but I personally like it on the iPad 2. It’s easier to see all the little details like the little thought bubbles that follow around your servants.

What kind of a game is it?

It’s a tower building game, except instead of building up, you build down.

It’s cute, it doesn’t really take up a lot of your time and you can definitely get by without any in-app purchases. Getting the gems does take a long time, but I feel like they happen more often in this game than Tiny Towers. It’s also pretty cute. There’s not a whole lot of difference between the different servants, but they’re servants, so it doesn’t really matter! The indentured servants sure are educated

I like the graphics much better than Tiny Towers, however, far more charming. On top of that, instead of having a Facebit option where you can read what the people in your building are thinking, there are tiny thought bubbles that you click on. It keeps you engaged and keeps the game window open for longer.

How Does it Play on the iPad?

I prefer the iPad version. I can’t imagine playing it on a smaller screen though you don’t necessarily need the larger screen. I just feel like you’d be missing out on a whole lot of cute detail. On top of that, it’s easier to see who has the thought bubble following them around and then clicking on said servant.

Well aside from the unbeatable price tag, there’s a lot of reasons why I find this game enjoyable. Like I’ve stated previously, the graphics are quite good. While there’s not a whole lot of variation in character design, it doesn’t really matter. If I wanted to play a game where I could tell apart each character and was invested in their lives, I’d be playing an RPG or something. That being said, I will play the game for quite some time (I hate to admit, but sometimes more than an hour) simply because it’s a charming game. 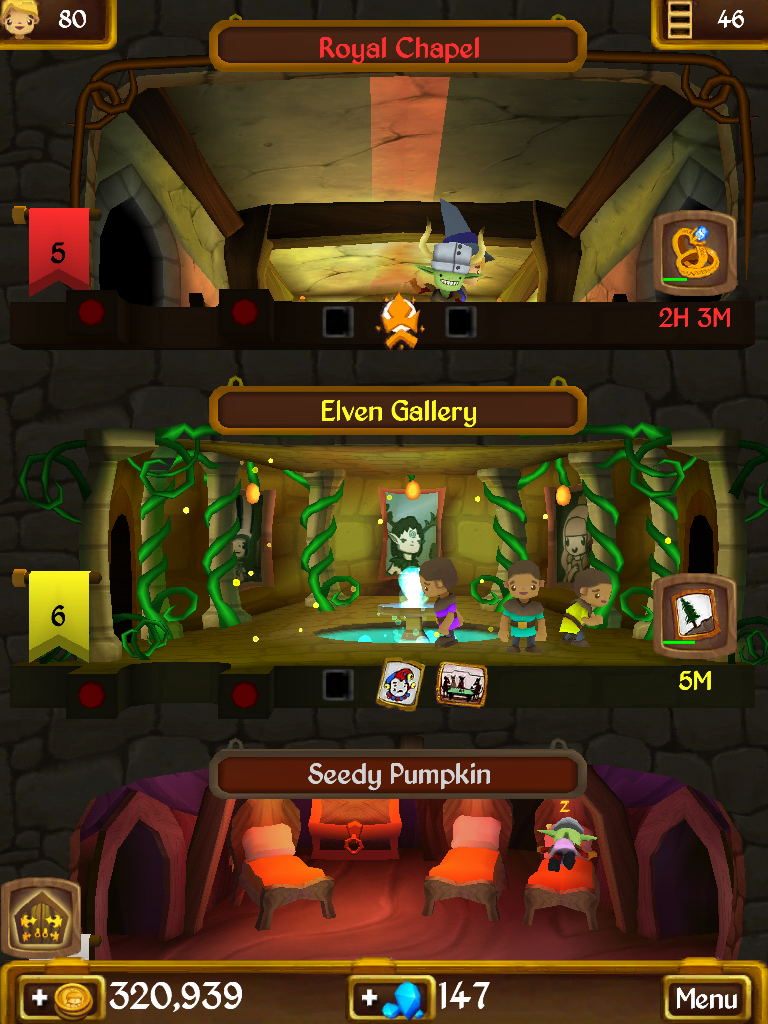 Elves increase the skill of your workers

The servants march around back and forth, some dance while others do a muscle pose and then there’s the random thought bubbles. The thought bubbles are occasionally hilarious. One of my favorites is “This isn’t my real job. I’m actually an actor.” The lower you dig, the more expensive each floor gets, but there’s plenty of ways to make gold in the game. Clicking on a servant’s thought bubble will net you some gold depending on the amount of floors you have, businesses will bring in money and ferrying elevator passengers will give you a good amount depending on how far down they go. 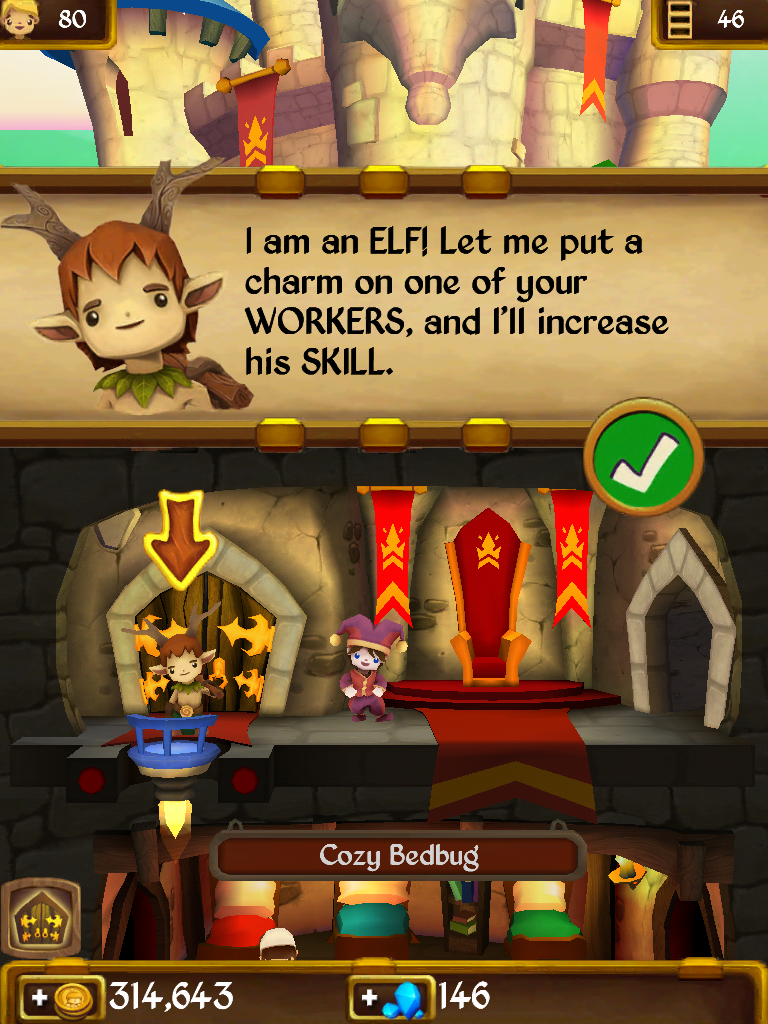 You can get gems sometimes by fully stocking a store

Aside from stocking the different businesses, you can shuttle passengers to the indicated floor and earn extra gold coins. Certain passengers have special abilities: Dwarves reduce building time of floors by 3 hours; Wizards instantly restock a floor; Elves increase Skill Points of your servants; Traveling Merchant/Gypsy offers you a collectable item for 50 gems; Champions will bring in residents from the dungeon to place in an empty room. While random, these additions definitely help with the gameplay. You won’t often be waiting around 11 hours for something to restock because a wizard will pop up. My favorite is definitely the Champion. Asthe number of floors increase the the difficulty of finding willing subjects to move into the lower residential floors also increase. There is the option of paying gems to move in citizens, but it’s not really necessary.

So what do you need gems for? Well they can be used for a lot of things like the hurry option for restocking, selling out stock and building floors. Gems are also used to hatch stuff on the special floor. I currently only have a dragon (they can restock a floor once every 5 hours) and getting another dragon costs around 20 gems. You can receive gems in various methods. The easiest is simply making an in-app purchase though there are also options of making gems for free by doing certain offers. There are plenty of ways, however, you can receive gems through standard gameplay. Building a floor nets 1 gem, placing a servant in their dream job is 3, playing 5 days in a row is 5 gems. You can also randomly get gems by doing princess missions, receiving a tip from an elevator passenger and clicking on a servant’s thought bubble. 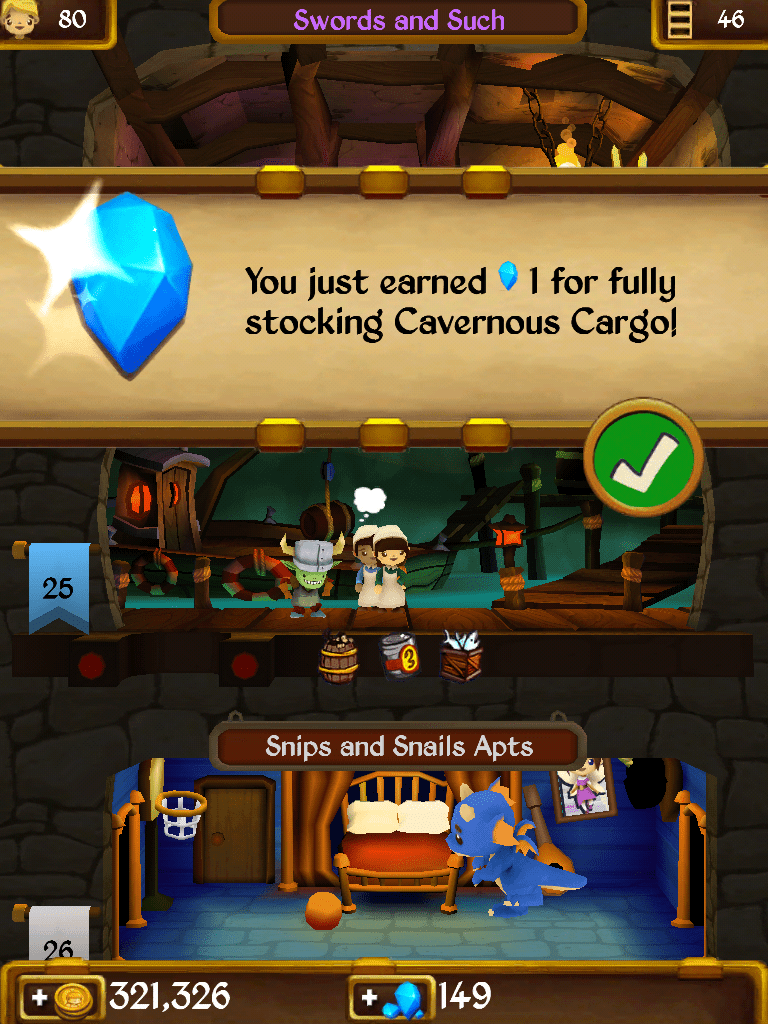 You can get gems sometimes by fully stocking a store

With the new patch you can also receive a gem from a firecracker that randomly appears on a floor. If you find it when it first appears and tap it until it explodes, there’s the possibility of getting a gem, though you’ll most likely just get gold coins. I’m saving up my gems for the most important thing – elevator upgrade. It will take A LOT of gems to upgrade your elevator. What’s the point of having a faster elevator? Well aside from getting your passengers to their destination faster, it will also help with the Princess Missions. Yes, the lovely princess who watches over these servants will give you missions, namely just to get her something from one of the businesses within a specified amount of time. If you get there in time, you’ll receive a bonus, if you don’t, well, no bonus for you! 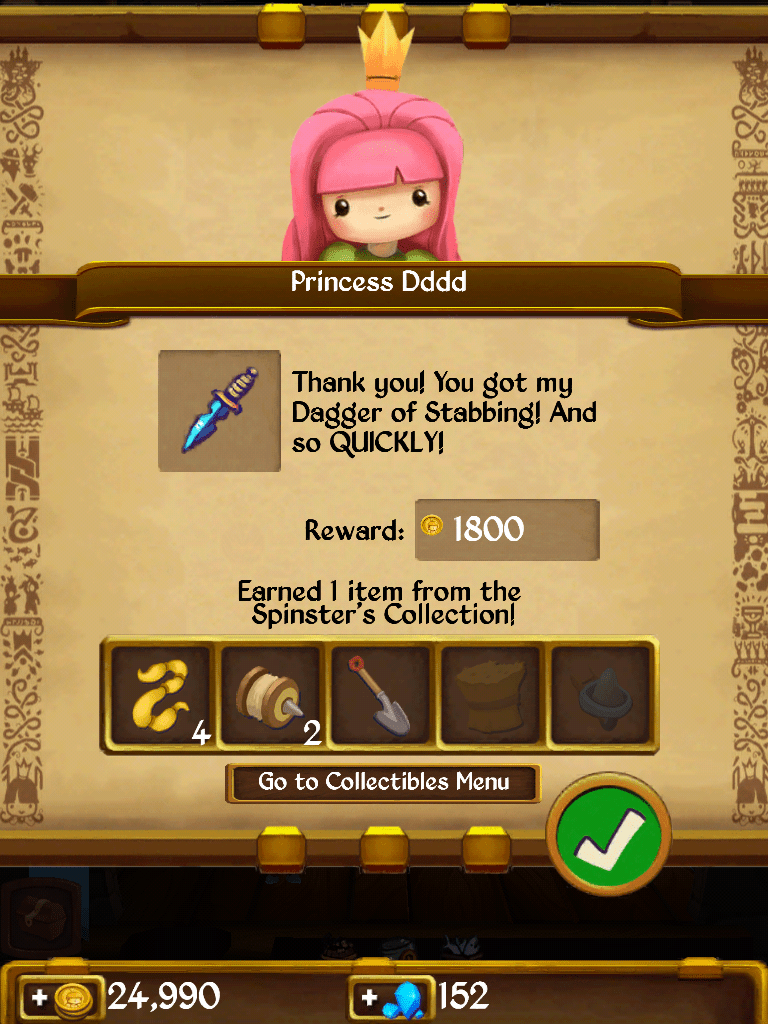 When you have received all the collectable items for a particular set the first time, you receive a special floor: Goosey’s Golden Egg, Counting House, Double Rainbow Room, Smuggler’s Den and Rumpelstiltskin’s Spinning Wheel. Once the collection has been completed, if it is completed a second time, you receive a pile of money. It’s definitely worth it to get these special rooms since some of the indentured servants have them listed as their dream job, but also because the stock for those rooms sell for much higher than standard businesses. They also take a whole lot longer to restock, but you win some, you lose some.

Like a lot of tower building games, the more floors you have the longer new floors take to build. This isn’t a bad thing necessarily, but it would be nice if it didn’t take over a day to build a floor. Another issue is that there’s no social play, unlike Tiny Towers. In Tiny Towers, the main reason you build for playing is to beat your friend’s height. Here, there’s none of that, which hasn’t taken away from gameplay yet, but once you hit the max number of floors (which I hear is around 100) what happens then? Games like this are meant to be offer infinite hours of gameplay, which is where social play comes in.

My main issue with this game and with other tower building game is this: What’s the point of placing some one in their ideal job (aside from the gems)? Happy indentured servant doesn’t offer an additional discount to restocking items, it’s all based on their skill level. They don’t work more efficiently; items take the same amount of time to stock with happy servants versus not happy servants.