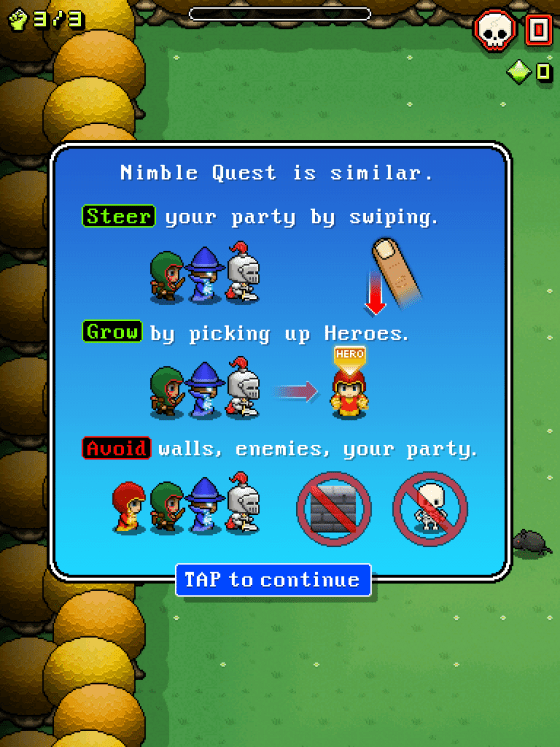 Just like Snake. But with swords, monsters and fireballs.

Nimble Quest is a universal app for iOS 5.0 or later.  As always I prefer gaming on my iPad 2. 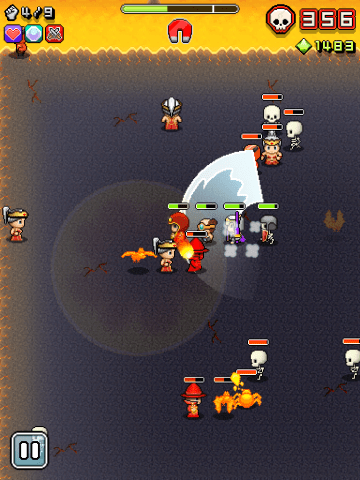 Not looking good for our heroes.

Nimble Quest is an interesting Freemium game that takes the classic game of Snake and updates the heck out of it. Just expect something that’s really fun for on-again-off-again play. Come into this game knowing that you are going to die.  You aren’t going to be fast enough, you aren’t going to be lucky enough and you aren’t going to hit hard enough. You are as good as dead. Just try to enjoy it as much as you can before that happens. Little by little you will get stronger and so will your powers and upgrades.

Then you are off to start the Conga-line of doom.

You have the choice to start playing with a different number of fantasy characters who have their strengths and weaknesses. Initially the characters really are unbalanced. Some start off all but useless until you upgrade them a little bit.  Getting level one upgrades for everyone is pretty cake, level two is a bit tougher and level three is where you have to make your big decision: Do I make an in-app purchases, walk away or just grind?

Honestly the in-app purchases here don’t really bother me because there are tons of upgrades outside of the characters themselves. These power up upgrades really do make the game a lot easier and more fun. They eventually help you make even more money in-game. You really do earn a good amount of currency in game, so if you work for it you can max everything out.  Little by little you will notice your characters getting stronger, and even when you do run into that level that you just can’t beat, you will still enjoy the journey there.

Again don’t expect to be able to beat this game fast without spending a few bucks unless you grind like a mad person. For a free game there is tons to enjoy, and I have been enjoying it so much I just might get that $4.99 Red Crystal purchase. I wish it were cheaper, but then again it would also be a thank you to NimbleBit for making so many great free games so far. That’s just my choice though. If you don’t feel like paying for anything in game you don’t have to, just don’t expect to make it too far, too fast without grinding.

Pretty good, for the most part... 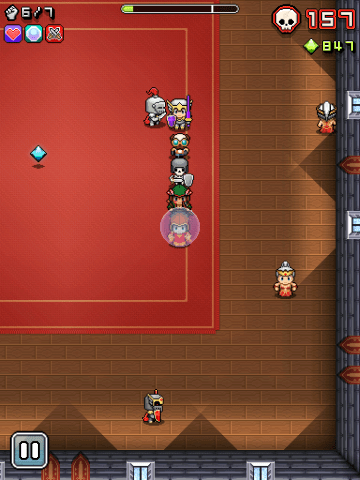 Try not to run into ANYTHING.

The controls for Nimble Quest are, for the most, part spot on. It does lag from time to time. It’s distracting since the whole game freezes for a second, but it never gets me killed.

The graphics are really retro cute and the music is fun. I love that each time you upgrade your character they look a little different. The level design, while seemingly simple, really does add a good sense of mood to where you are.

There is an Arena area in game that you pay with the in-game currency, Tokens. This allows you to play in a ranked game. Arena combat is harder than the regular game and takes a lot of skill to really last. You can join guilds that vie for the top of the leader boards. The higher up you get the better, the chance you have of getting more Tokens in return for playing. Before, you were able to use anyone you choose for the Arena. In the name of balance and fair play, you can now only use a preselected character. For now it’s Slash. If you wish to really do well here be sure to upgrade all of your characters, power ups and the chosen character for the Arena.

Join our Arena team at:  #NARDIO

The character design is great and the enemies look good too. The music is also fun. The great and annoying part of Nimble Quest is the randomization of the enemies and drops you face. Some games  will feel like cake with tons of money drops that will net you thousands. Others will get you a few hundred tops. Some games you get all the potions and power ups you need, and others you will be starving for each little crystal you can find to help you survive. 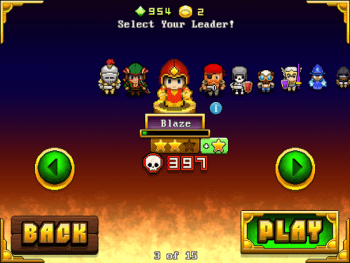 Each hero attacks differently, drastically changing how you have to approach each enemy. This really adds a fun level of challenge and replay to the game.

The different enemies each present unique challenges, leading to a deeper game than you first thought. While a lot of the game depends on luck, you do need to think about how you approach certain enemies. It gets trickier the more of them are on screen at once. This is where Nimble Quest really shines, it just doesn’t get repetitive because you really have to always be on your toes. And because of that grinding for gems really doesn’t feel like grinding. 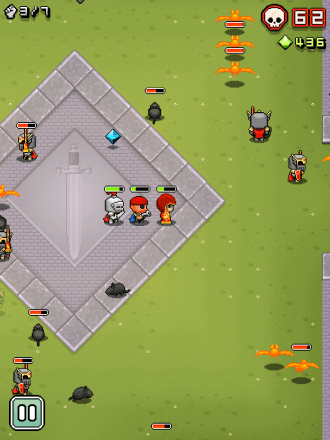 When you hit Dungeon 1 you need to start spending your special currency (Tokens) to buy the per game upgrades. It’s not just about skill here anymore. The enemies just hit harder and take more damage to die. Unfortunately, you don’t hit harder unless you pay up with the special in game currency. Thankfully tokens are very easy to get in game. You can get them to drop pretty often in game and in the arena if you play often, and they just give them away watching sponsored videos. Also, if you participate in the Arena you get free tokens after they finish ranking the top guilds in game every few days. But getting farther in game and knowing you don’t have enough tokens on you for the required power ups is pretty depressing and annoying.  The final slap in the face is that the cost of replaying a level doubles each time you continue. Just leave it at two Tokens max please.

The Depths 1 is pretty much where my game always ends. I have gotten close once but usually I just get stomped. Most of the enemies there move really fast and have area attacks. It feels cheap and bothers me, but that’s when I either just stop playing for a bit, or just use the gems I have earned so far and work on my upgrades.  But seriously that area needs a difficulty Nerf.

The Arena suffers the same problem where enemies have increased health and damage output while you do not.  After about one hundred hills you notice the enemies you were killing with one or two hits now need six to take down. They also start to move and spawn faster. It becomes more about dodging and running away from the hordes of enemies and whittling them down while you wait for a power up. Unfortunately since the power ups drop at random you find yourself holding your breath a lot.

Arena enemy health really needs to be constant, or at least cap out at a lower level than it does now. I can understand more enemies spawning on screen faster but it’d be better if the game added newer, stronger enemies. Maybe mini bosses can show up after every 20 kills in addition to the enemies on screen.

Despite all of the no like part of my review I still play,Nimble Quest a lot, and I really think you should too. It really is fun and helps the subway ride or the break between classes go that much faster. I’m sure with a few updates this game will really shine even brighter. Best of all its free!