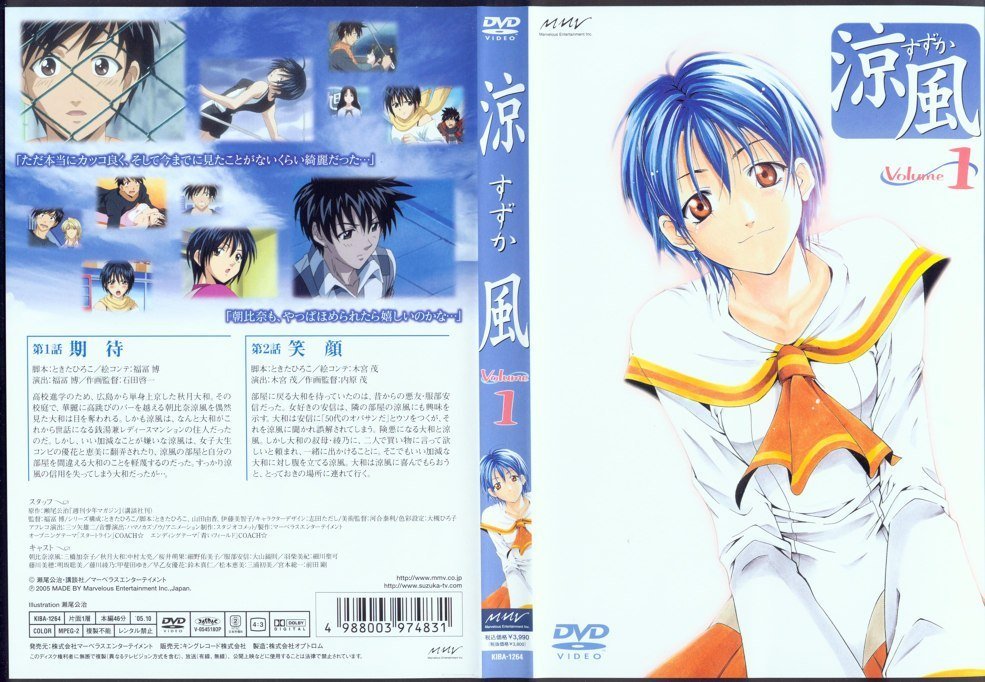 It’s all right. Suzuka is worth a watch.

The animation isn’t really anything special, so you’ll get the same experience with SD as you would with HD.

Suzuka is a slice-of-life romance anime set against a sports backdrop. I wouldn’t really call this a comedy, though there are a couple silly moments, the tone of the overall story is generally more serious than most animes within the same genre. It’s generally pretty true to life, there’s no exaggerated acts of violence or too much fan service. The conflicts are more or less believable. The story, more than anything, is about the growth of the two main characters, Suzuka Asahina and Yamato Akitsuki. Sure, there’s romance in here, but the love story seems more like a plot point to help develop the characters more than the plot itself.

There’s no over-the-top violence or gags and hardly any fan service. The story itself is believable as are many of the characters reactions. I especially liked the side characters Honoka and Hattori. In the beginning I was expecting Honoka to fall into the category of shy girl who won’t make a move, she surprised me. While she was still quite shy, it was refreshing to see a shy girl take the initiative. I also enjoyed the fact that Hattori, Akitsuki’s friend, was not just a typical idiot. Sure, he would give bad advice on occasion, but for the most part he was very perceptive of his friend’s moods and gave quite insightful advice. Again, it was a refreshing diversion from the typical idiot best friend in this genre’s cast. The rest of the supporting cast also hold their own and bring in interesting dynamics and complex personalities to the otherwise stagnant plot. Aside from this, the track and field part of the story was quite interesting and even, dare I say, thrilling. Events happen that you don’t expect, which is great. So often in sports anime the protagonists are pretty much unbeatable. Suzuka highlights the hard work that goes into sports and how even talented athletes don’t always finish first.

Honestly for most of the show I really dislike Suzuka. You can kind of guess what happened from the beginning, but even so, her attitude towards Akitsuki is completely uncalled for and honestly makes her incredibly unlikable. On the flip side, that makes Akitsuki look pathetic. It’s understandable to a certain extent that love would make you pine after some one, even if you know they’re not good for you, but come on, it seems like the anime is promoting emotionally abusive relationships. Sure, the anime confirms the truth 3/4 of the way through, but by that point you can’t really forgive the way Suzuka has treated Akitsuki. On top of that, the voice acting is average, the animation during the actual sports events is so-so and the music itself is bland. I would have liked this anime more if it didn’t try so forcefully to put the two leads together. In fact, it would have been a much better anime if it focused solely on Akitsuki’s growth and his growing love of track. Sure towards the end he begins liking it for himself, but really he continues to do it to be close to Suzuka and to impress her. Come on man, be your own person! Also, Suzuka herself, despite being the titular character, really has no depth to her. Even with the tragic backstory, she just ends up being a tsundere cliche who just can’t seem to say anything nice to Akitsuki’s face. It’s frustrating and it makes the love story unbelievable.

Despite my dislike of the two main characters there were some moments in the anime that made me laugh and emphasize with the characters. I loved the fact that the other characters diverted from the norm and wish that the main characters had the same complexity. I also think the sports part of the story was well-done despite some awkward animations here and there. Overall, I would recommend watching the anime without expecting a sweet, heart throbbing romance.

Check out our other TV/Movie reviews!