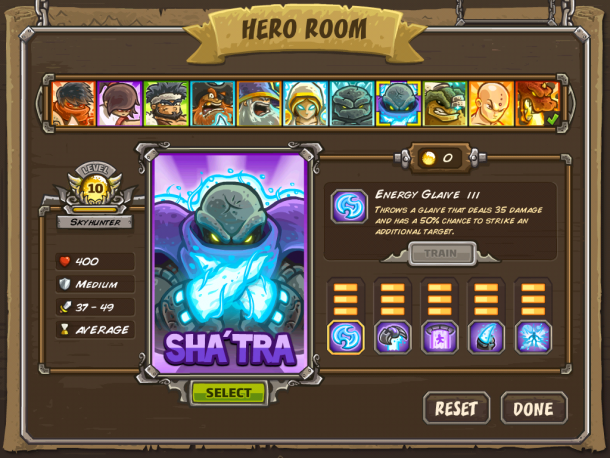 Worth the price of admission.

How  much does SHA’TRA normally cost?

Why do we think so?

SHA’TRA is my fave Hero right now. Sure he needs to be fully maxed out to be appreciated, but once he is SHA’TRA earns the title “Hero”.  He just deals good ol’ fashioned death. SHA’TRA has multiple attacks that just melt enemies and a good mix of survivability and speed makes him the most well-rounded character to Kingdom Rush Frontiers.

He has no fluff powers. SHA’TRA doesn’t summon any adds to suppress baddies, but he does summon lots of damage. SHA’TRA isn’t the Hero to hold off the enemies while the towers do the work, he kills them before they get to the towers or at least weakens them enough to make sure they don’t survive much longer. Everything you are allowed to level up on SHA’TRA just makes him that much more awesome.  He (she/it/???) has pretty fast movement speed so maneuvering him where you need doesn’t feel like a chore. SHA’TRA also has pretty good armor, so you don’t have to worry about him melting when you aren’t watching him too closely. His one hit kill Abduction gets cast very often and thankfully at times when I really need it. On more than a few occasions he saved me stars or just the battle itself with his ability to abduct a random baddie.

Energy Glaive is flat out awesome at quickly decimating groups of enemies or weakening them just enough for the background troops to mop them up. Best of all it works on flying and ground enemies!

Purification Protocol works wonders at melting enemy health. It attacks fast and it attacks multiple enemies. This is another attack that targets land and air enemies.

Abduction…. OMG do I love this ability. I’m serious. Some other Frontiers Heroes have one shot abilities, but none come close to the awesomeness Abduction brings to Kingdom Rush. Abduction does what the name implies – SHA’TRA taps his wrist thingy and summons what looks like a Protoss Carrier that then levitates and abducts some poor random enemy to meet his grisly fate on the Probing Table of DoomTM….  Abduction gets cast often and I think also gets air units… So awesome.

Vibro Blades Kill Harder. Kill Faster. This upgrade just helps your lil Alien of Doom deal lots more damage. It’s a no brainer and  seemingly not that special until you just see him obliterate bad guys. 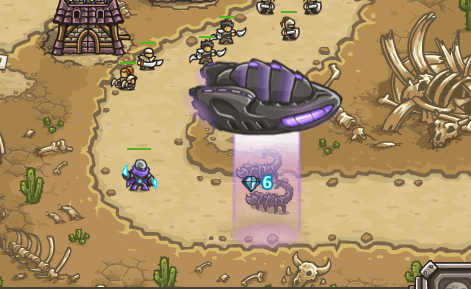 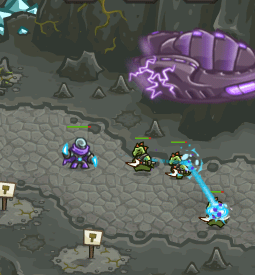 My fave part about SHA’TRA is his ability to pop out multiple abilities almost at once. With several special attacks going and his awesome damage dealing capabilities, SHA’TRA is totally worth his normal price of $4.99. Sure it’s pricey and even more expensive than the game itself, but the fun replay value he brings totally makes up for it. He is so strong that I feel comfortable enough experimenting with different play styles while not having to worry too much about losing.

Honestly his Final Countdown is pretty anti-climatic and not powerful enough in my opinion. I mean the very attack was modeled after Predator’s final move. It should be a LOT stronger. It would have been more interesting if it was a double edged sword because it’s so powerful. If you let him die he can blow up and take ALL nearby units with him, including friendlies. This would totally be a huge problem if you have him surrounded by much needed troops.

Anything you want the SHA’TRA to have?

A random distance laser attack would be cool or a light shield that randomly protects against ranged damage and again a better Final Countdown. SHA’TRA costs five bucks, he does feel pretty heroic already, but if I’m gonna wish, I want him to be a bit more badass for the price I am paying.

What really would make me happy is to have more stages to make him shine. I love that Kingdom Rush already had its first expansion with Rising Tides. For all you who want that extra edge or just want to have some fun, I totally recommend bringing SHA’TRA to the beach.

SHA’TRA is a downloadable character available for purchase in Kingdom Rush Frontiers.  An amazing tower defense game made by the insanely talent team over at Iron Hide Games.  Be sure to check them out at their website here.