Free Skate Xtreme HD is iPad only iOS 4.2 and later.

Free Skate Xtreme HD is an endless running game that puts on the wheels of a Skateboarder. There are a lot of interesting ideas here but unfortunately they just don’t work right together. To push the endless runner further Free Skate Xtreme HD brings a few elements from skateboarding games such as rail grinding and flip ramps. Another interesting feature is a player head tracking mechanic that follows the players face to move the on-screen character. They are all great ideas, but sadly the execution falls flat.

As much promise as this game has, it really doesn’t get enough right to justify its space on your iPad. 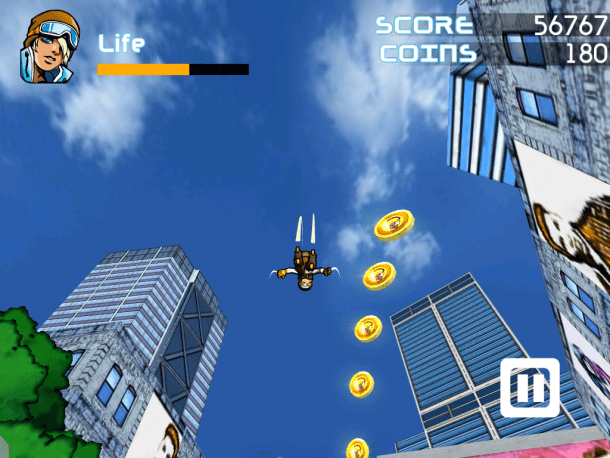 Where will he land? Nobody knows!

There are too many things to do and none of them work well enough to justify them being in the game. The head tracking mechanic, while nifty for the first five seconds, quickly becomes frustrating. It really has no reason to be there and it makes the gameplay slow down to such a glacial pace I found myself dreading and avoiding it as much as possible.

The flip jumps camera perspective seem to almost always set you up for a crash as you land since you can’t see where you are going to land . The quick dodge system seems more luck based than skill since getting the right dodge consistently seems almost impossible. Draw in is another problem that just rips you out of the game. Having a car appear 15 feet in front of you is beyond frustrating. There are many, many more problems like this that unfortunately destroy the gameplay.  All of this is made worse by the insane upgrade costs.

There are a few bright spots in the art direction and gameplay but not enough to justify recommending Free Skate Xtreme HD.