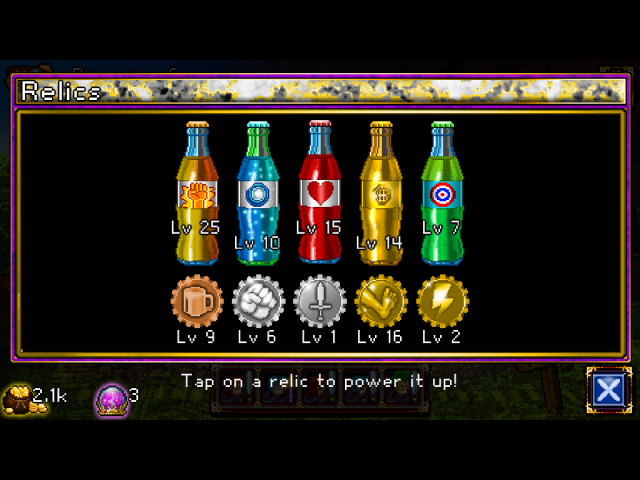 Is Soda Dungeon worth your time?

What should I play Soda Dungeon on?

Soda Dungeon plays perfectly on any device. As an attempt to try and be a productive adult in this world I’ve had to limit myself to having it only on my iPad. I am sorely tempted to reinstall it on my iPhone. It’s just that much fun. 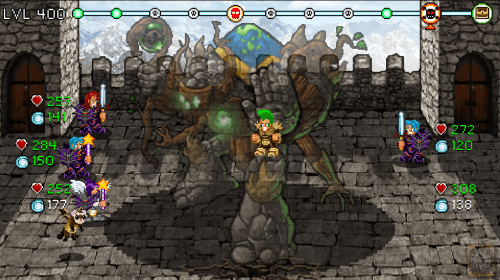 Use poison and pile drivers to take down the level 400 boss.

Soda dungeon is the amazing amalgamation of a light dungeon crawling role playing game and an endless tapping game. This may sound very weird and very, very wrong, but don’t worry, Soda Dungeon is brilliant and unfathomably addictive. I am over fifty hours of playtime in and I am still hopelessly addicted and loving Soda Dungeon. 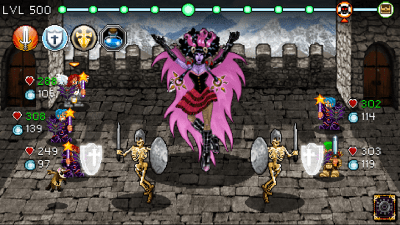 A lot of this review is me breaking down how Soda Dungeon works and praising it with gushing enthusiasm.

Soda Dungeon has the most brilliantly implemented in-app purchase system I’ve ever experienced. You never need to spend money to enjoy the game.  And I mean the entire game. You can even buy out of pop up ads (that aren’t intrusive at all) by simply paying a small amount of easy to earn in game gold. During my very first play through I decided to buy out of ads with real money simply to support the developers as thanks for all of the fun I was having. I’ve since followed that up with a few more in app purchases, once again to thank the developer.

Soda Dungeon’s gameplay is fast and fun with plenty of character progression.  No matter how you play this game you will never feel like you are wasting your time.

I have been reading Soda Dungeon referred to as a rogue-like game but I wholeheartedly disagree. I feel like giving Soda Dungeon that sort of simple label diminishes what the game is all about. You keep all the gear and gold you acquire during your dimensional runs (More on that later). In fact that’s the whole point of the game. There is stat point progression, permanent power ups, and even pets that can be acquired. You also get a fresh checkpoint every ten levels. Since there is always forward progression there isn’t anything rogue-like about Soda Dungeon.

Soda dungeon has you hiring adventures to go on dangerous dungeon runs so that you can steal the loot and gear they drop when they inevitably become overwhelmed. It’s a silly premise, but it works wonderfully. The art is right out of 16 bit’s prime days and the music is nice and catchy. The sound effects are great, too. I have to say I do love the clever writing and bits of humor injected into Soda Dungeon.

Soda Dungeon’s gameplay is based around progression. When you first play through the game you start off with free adventurers (Soda Junkies) who don’t last very long.  Over time you can save up for better adventurers and you notice the better your group, the further you make it. The more you play, the more gear you get, which in turn makes your group that much stronger. Don’t worry about having to endlessly watch the screen and repeat the same attacks over and over again forever. Soda Dungeon allows you to set your party to auto attack.  Set it and forget it until you look back again. You can always stop auto attacking anytime you want. 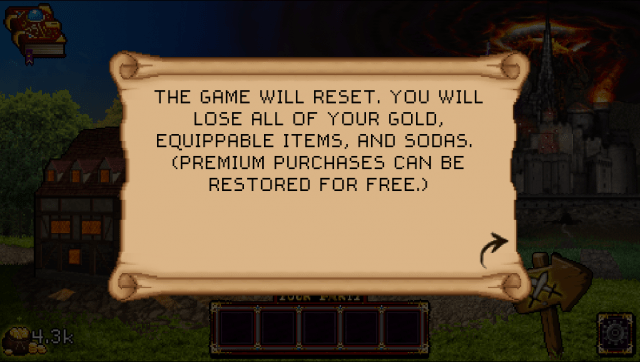 This is when Soda Dungeon really starts getting good!

At every fifth floor you will reach a mid boss who is generally harder than most of the regular enemies. Afterwards you will deal with larger groups  of enemies until you get to the tenth floor where you will be greeted by the floor boss.  These can be a bit tricky, but over time you will be making short work of them. This repeats for every fifth and tenth floor. Eventually you will make it to the one hundredth floor and face the first big boss. This is where things get interesting.  This boss is tough and it may take a few tries to get through.  Afterward you are told you can travel to the next dimension.

The next dimension is sort of like most tapping games soft reset or prestige  mode. Doing so takes you back to floor one in the next dimension. All of the sodas you bought to bring in new adventurers are gone and so is all of your gold. But no worries, you also get an item that can boost your initials soda junkie with a new currency called “Essence.” Every new dimension afterwards gives you a a way to buff another of your suckers heroes with Essence. You also get another powerful relic that boosts all of your characters when upgraded with Essence. 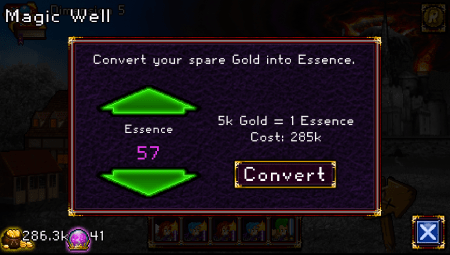 GET THE MAGIC WELL FOR FAST ESSENCE FARMING!

Don’t worry, the Soda Dungeon’s Essence isn’t how the dev “gets you”. It’s very, very easy to get.  After you go into your first new dimension it drops pretty often from enemies.  You also have the option to tap an icon on the lower left of the main screen to watch a picture ad for a few moments for a generous amount of Essence and a lot of gold. With such great incentives to watch a static picture ad you are going to be tapping that icon for gold and Essence every few minutes with joy! You also get a new relic item that gives your characters permanent boosts the more you level it with Essences. This is game changing and the meat and potatoes of Soda Dungeon.  All of a sudden Soda Dungeon becomes even more focused on replaying earlier levels to farm Essences and make money. Here is when you really start to love the ability to set your party to auto attack. Coming back to tens of thousands of gold and lots of Essences is amazing.

Now to Soda Dungeon’s Soda bar. You are able to upgrade the bar itself to attract more and better suckers heroes over time. This is nice both cosmetically and for giving you that feeling of progression as you play. Being able to have more mindless minions heroes to choose from and slowly boosting their power over time is great.

While upgrading your soda bar is affordable you are able to buy out and max pretty much everything for the low , low price of 99 cents. While this isn’t ever necessary, it is alluring. Sure you can get everything on your own pretty fast(the first few playthroughs), but 99 cents is impulse buy cheap and not to mention faster. But to make sure players realize this game is a mind bogglingly epic Freemium experience, your bar’s upgrade process and unlocks don’t reset when you go into a new dimension. Neither does the VIP upgrades you are able to unlock later on. However, any soda’s bought with real money are able to be immediately restored after entering new dimensions. While you don’t need to do this, it makes progressing in the new dimension that much faster. Again, you will be having so much fun playing Soda Dungeon that the extra 99 cents to unlock your favorite heroes seems like a no brainer.  BUT the more you play the faster you can earn money on your own, making spending money in Soda Dungeon feel like a luxury purchase or a great way of thanking the devs. 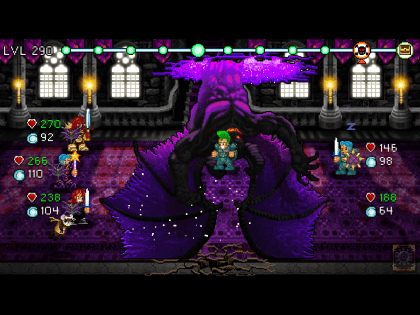 The Fighter is so badass when you level him.

I can go on and on, but just get Soda Dungeon.  It’s the most interesting and addictive game I’ve played in a good long while. I’m on my sixth dimension, and I think about halfway through the game and I am still absolutely loving it. Just when I started to think the game was getting repetitive and easy, I started to have to deal with bosses who really had me against the ropes.  Having to use strategy to take them down kept me enthralled and there have been quite a few big boss fights that left me feeling relieved and accomplished after I triumphed. The ability to upgrade my “weaker” B-Team characters is a godsend and insanely addictive. My Fighter was once someone I just used until I was able to afford the Knight and then was quickly forgotten. Now he has his relic leveled to 16 and is my power finisher. That relic along with the rest of the upgradable relics make him, along with the rest of my squad, insanely powerful and they just keep growing in power.  Now I find myself torn between trying to progress or trying to farm early levels all day to earn Essences and make more money to buy them.

Yes you read me right.  You can even use your in game easily attainable gold to buy the special currency.  It’s an amazing game design decision and it totally pays off because the replay is real here. I just set my team up just the way I like and set the game to level one and auto attack and when I come back my team is earning and earning. It’s great!

!!!GET SODA DUNGEON AND SUPPORT THE DEVS WITH IN-APP PURCHASES!!!

Soda Dungeon can crash during long playthroughs. Be sure to exit out to the title screen after every good run so the game saves and be sure to close out the app every once in a while to free up memory. Also, the bank income is pretty broken. I have it maxed out and I find I make more money during a 3 minute restart the iPad break than I do from after a long night’s sleep.  It’s kinda funny to wake up to 679 gold, but a restart can net me 24k.  This isn’t a huge problem considering how easy it is to make gold in game, but it’s just kinda odd.

I’d like some more enemy variety introduced. As is you see most of the enemies you will face pretty early on and you fight them forever so it would be nice to have some variety.

I’d really like it if the heroes base stats updated to reflect all of the relic boosts they are receiving. This would be really useful when picking heroes fresh off a reset. 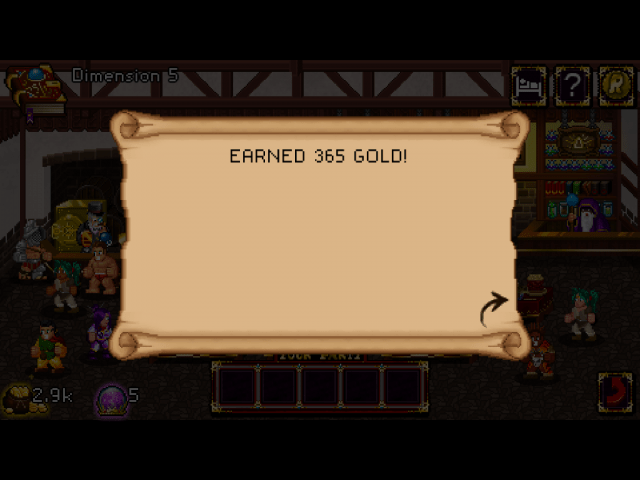 After being away for about 13 hours with max upgrades.