Is Tap Titans worth your time?

Normally YES but sadly, recently, no… When it works, Tap Titans is the greatest tapper on mobile. Now Tap Titans is an unplayable mess.

What should I play Tap Titans on?

Due to Tap Titans’ addictive nature, I keep this on my iPad at home so that I can otherwise function during the day.  If this were on my phone I’d be useless all day.  I’m serious.

Why I love Tap Titans & why it fails now: 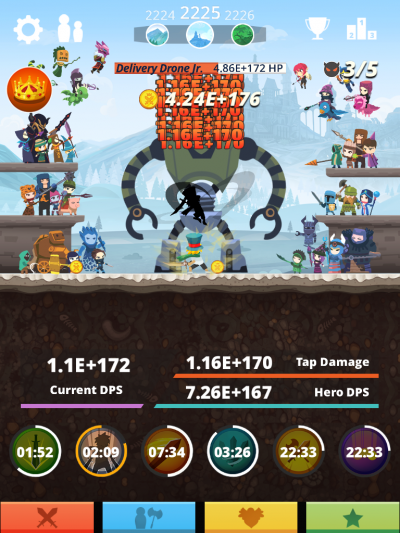 First off the game has been unplayable for me since the last update. I’ve emailed and tweeted Game Hive and heard nothing back so far. I really hope they don’t leave me hanging because I’ve supported them with in app purchases and have sunk a lot of time into this game.

Why Tap Titans used to work for me: Tap a bunch of times to kill monsters. Soon you can hire a hero to help. Hire some more and you don’t need to tap as much. Soon you will be upgrading your monster killing buddies and unlocking powerful skills to get further and further.  Tap Titans is all about progression and there’s plenty of that to go around. You’ll find yourself unable to progress much further on your first play through. No, it isn’t game over, it’s just time to reset your progress and get a whole bunch of relics. With these you can buy special artifacts with unique powers that will have you tearing through those monsters faster than before.  Every artifact you bought or powered up with the progression currency carries over to the next game.  This really gives Tap Titans the feel of tangible and immediate progress.
Artifacts along with their upgradeable powers are amazingly useful. Some increase the length of time certain power ups may be active. Others decrease specific power up cool downs. While some might seem better than others, they all add damage buffs to your characters. The buffs increase the more you level the purchased artifacts. The more of these you get the you can play through the game. What used to take me weeks, now takes me minutes.  Having this constant progression is addicting as heck to me. I recently got the very last attainable hero after months of playing and replaying the game and yes, there was an awesome sense of accomplishment.  It felt even more awesome after I was able to get him even faster. Before the last update hit I found I was able to get him in about a half a day.  Now the new addiction is getting all the relics and powering them up as much as possible.  Tap Titans just doesn’t get old.

Since the last update Tap Titans is unplayable with its crashes.  Normally Game Hive has been pretty great about quick patches, but the last update was September 22 and no word since.  Again I emailed them twice already and haven’t heard anything back.  I am really hoping they get this working fast because I miss my addiction.