Zombie Kill of the Week Review 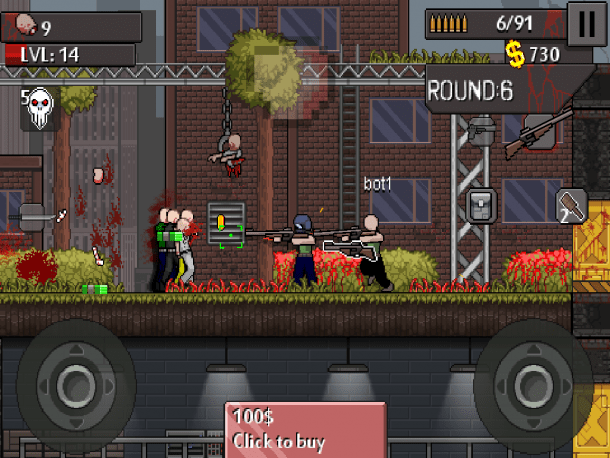 Zombie Kill of the Week is a universal app for iOS 4.3 and later. You get the same great experience with all devices. As always, I prefer gaming on my iPad.

Zombie Kill of the Week is genius – Pure, zombie killing, simple genius.  Gimmie a sec because I’m about to gush.

Why wasn’t this game out sooner? You know, like when the iPad launched. Zombie Kill of the week is a 2D, side-scrolling, retro style zombie shooter. There isn’t a story here, just lots of zombie killing and character progression. For extra fun you can also customize your character and get AI bots to help you survive the endless zombie hordes. This is one game you won’t get tired of thanks to the tight controls, fast gameplay and randomized hordes. Get this.

It takes a few minutes to get used to the controls and movement, but after that everything works fine.  The graphics are a simple retro throwback that looks hand drawn.  Overall it really works well.  Normally I don’t even notice the music, but it definitely adds to the atmosphere of the game here. Difficulty progression is a little weird since the enemies you face are sort of randomized, but the longer you survive the tougher Zombie Kill of the Week  gets. 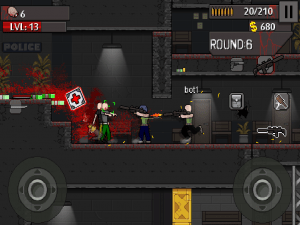 To keep things interesting there are three modes: WWZ, survival mode and challenge mode.  WWZ which is a basic offline survival mode. Here you can earn experience and unlock special currency to buy cosmetic items and additional levels to play. Every time you level you get a skill point that helps your character survive longer. This skill point upgrades to things like faster reload time and  improved drop rates. I love that Panic Arts Studios thought to add this sort of upgrade system. I just wish there was the option for upgradeable armor.

Survival mode is similar to WWZ mode – you try to survive as long as possible – but you are ranked in online leaderboards based off your high scores. I’ve never been one to chase a place on leader boards this one isn’t really for me. I do enjoy going in every once and a while and see how much better I do.

Challenge mode is where the replay value really kicks in. Just like the name reads, don’t expect anything easy here.

The combat can be fast and, at times, overwhelming. The only real problem I’ve encountered are occasional enemy spawn points where I’m running. When you are low on health it’s very frustrating to have your game end because a mob of zombies spawned literally right on top of you. Overall the game is just smooth.  No lag and the reaction time is spot on.

Theres’ a lot to list but things like daily objectives that reward special currency, meaningful character progression through skill points and random zombie blasting really make this game just plain fun. Best of all Zombie Kill of the week is free.  The Freemium model in place here is the one gamers love. You can unlock pretty much everything without ever having to spend a dime. I do recommend supporting this insanely talented developer with some in app purchases.  I really hope Panic Arts Studios expands on Zombie Kill of the Week and makes a 2D platformer with connected levels and boss fights.

Zombies spawning right over me as I am running.