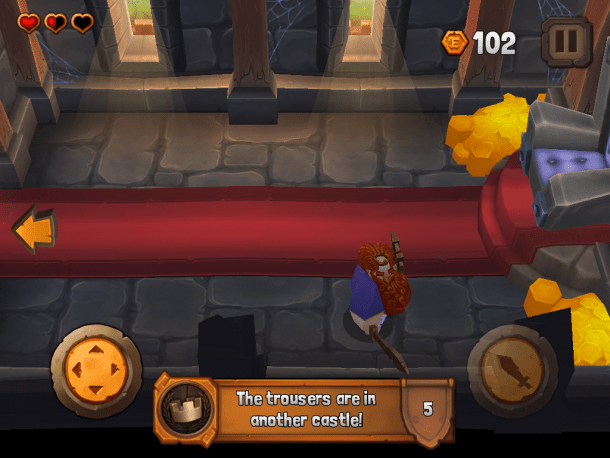 Can’t a king nap without losing his pants?

Trouserheart is a universal app for iOS 4.3 and later. You get the same great experience with all devices. As always, I prefer gaming on my iPad.

I look forward to 10ton games.  (Read our exclusive interview with them here!) Every time a new game is released by this very talented team I need to play it. So far, I haven’t been let down. When I was contacted by 10ton a little while ago about them going into publishing I was curious. Would they hold their published properties at the same high quality level as they rest of the games they make? For Trouserheart I am happy to say yes! Trouserheart is a fun hack and slash that plays perfectly on iOS.

Trouserheart is a straightforward hack and slash adventure game that brings a good bit of humor and challenge. You are a king whose pants were stolen. Your mission now is to storm castle after castle until you find them. 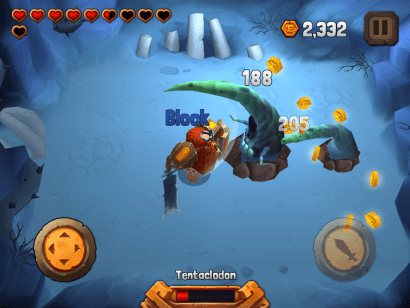 Trouserheart plays great. The controls and movement seem a little stiff at first, but soon become second nature. From day one I haven’t found a single bug. The music and art design are up to the high standards of any other 10tons game. I really love the art design here from the broad look of our king to the interesting yet light hearted enemies. Trouserheart is a very bright game that is a visual feast for your retina screen. There are no lag, or framerate problems, just smooth pants hunting fun.

Difficulty progression works great for whatever difficulty you choose. Trouserheart on casual is perfect for those new to hack and slash adventures. It’s very easy to farm gold and the enemies put up a decent challenge to make sure you are on your toes. Hardcore mode brings with it the challenge experienced hack and slash veterans will love. Now hacking and slashing, turns into coordinated attacks. Bosses that you just hacked away at now need extreme caution. What used to be easy groups of mobs in casual mode are now a pack that can quickly bring death. Permanent death is exactly what the name implies. This is what you’re going to be doing after you clear Casual and Hardcore. 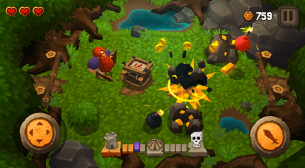 Trouserheart is a little short for my tastes. The game is just so darn interesting I was a bit let down when I cleared it the first time. Hardcore was a bit more of an adventure with the added challenge and my many deaths. I did permanent death for a bit, but it’s just not my cup of tea.

I feel like Trouserheart would have been an amazing Act 1 of a larger game. Normally 10tons games are much longer than this so I was a bit let down, but that’s because the game is so good. I still recommended the games to my friends. This an especially good game for younger gamers. The light hearted gameplay and story are perfect for those looking to get into their first hack and slash. For older and more experienced players this will be a fun game for about two hours or so on hardcore.

Trouserhearts is just a good game shipped out right.  The fun, simple gameplay, perfect controls, sound and graphics make this a must have. Trouserhearts is just fun. Sure it could be a bit longer; but with the polish and fun that Trouser heart brings it’s totally worth the price of admission.

Trouserhearts needs profiles. Currently, you can’t stop your game and hand it off to someone else for a fresh start. Trouserheart is also a tad short.  You can plow through it on casual in about an hour or two. Thankfully the harder levels add a significant amount of replay, but I still want more. Usually 10ton games are a lot bigger. While I was delighted to have finished the story mode, I was still a bit disappointed I was done already . The real problem here is the game is just so darned fun that I just want more of it. I really hope Dicework Games and 10ton revisit this awesome character and universe later on. Like I said before, this could be the first chapter in a much larger game, and universe.

Congrats Dicework Games & 10tons. Trouserhearts is a great start to hopefully a very long and fruitful partnership.  Now please give us more Trouserheart! 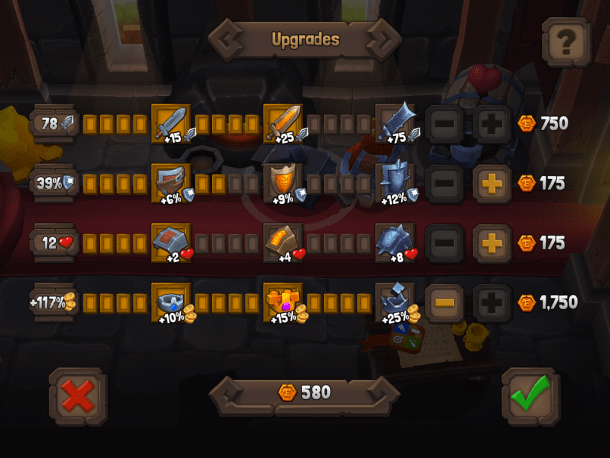