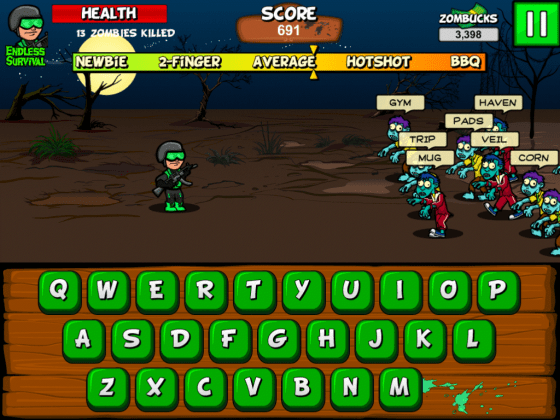 If you want to play Zombie Typomaniac I say do it in landscape view.

Not just yet for the iPad.

Zombie Typomaniac is available only for the iPad right now. There is a trial version on Facebook that you can check out free. It works way better with a real keyboard. 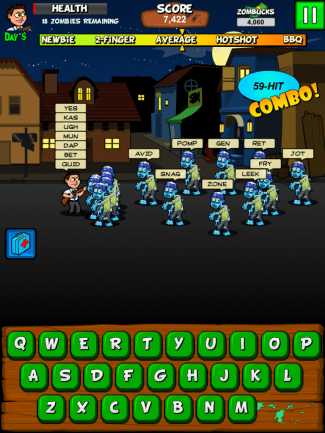 Zombie Typomaniac is a zombie killing game that uses typing as your weapon of choice against the undead.  This is very similar to Sega’s Typing of the Dead released a few years back.   Zombie Typomaniac  is chock full of potential, but it’s held back by gameplay and interface problems. It’s fun at times and you see the potential there but, as of right now, it’s just not good enough to get a recommendation from me.  Thankfully the developer is very receptive and is actively seeking input from players for future updates.  I have hope it will get better. Currently though, it’s annoying not only because of the problems, but also because you know how much fun it could be if it were working right.

This could be an awesome typing teaching program for the iPad if the difficulty gets scaled properly and Bluetooth Keyboard support is added. It has in app purchases, but you don’t need them to advance or enjoy the game.

The graphics in Zombie Typomaniac are great, the sound effects are excellent and the music is fun. The idea really is genius. The unlockable costumes with different sound effects are a really nice touch.  The ability to earn money fast in game is great for those who worry about the in app purchases.  I played the game for a few hours and have already unlocked most of the in-game costumes without having to make any in app purchases.

The portrait typing only really works if you have big hands and are good with your thumbs.  Landscape is slightly better because it is almost the size of a small keyboard.  Unfortunately it’s not.  If you type everyday get ready to find yourself getting frustrated fast trying to get the feel for the new, smaller keyboard. Also the keystrokes often don’t register.  For a game built upon typing fast and accurate that’s a huge problem.  Again the big problem here is Zombie Typomaniac begs for a physical keyboard, but oddly doesn’t support it.  According to the developer they are trying to find away to separate the scores of people who use a keyboard and those who just use the iPad screen.  While their intentions are good, the end result is just broken. 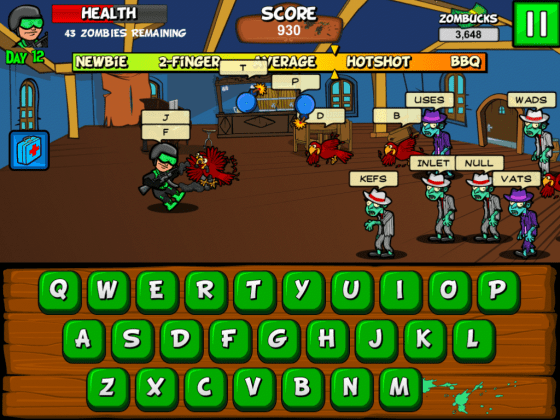 This isn’t even a bad example of the bird rushes.

Zombie Typomaniac’s next problem is that the learning curve here is flat out brutal. This wouldn’t be so bad if the support items dropped with some sort of regularity or you were able to manually adjust the difficulty settings, but they don’t and you can’t.  I found myself starting at above average difficulty and found that it quickly would ramp up to hot shot the better I did. While this seems great in theory, I just wasn’t ready for that level of difficulty.  Sadly, you have to die several times in a row before the “Restart at Lower Difficulty option appears.” Even then you can quickly find yourself ramping up to the tougher faster speeds, leading to death after death after annoying death.  The game needs the option to keep a steady pace. 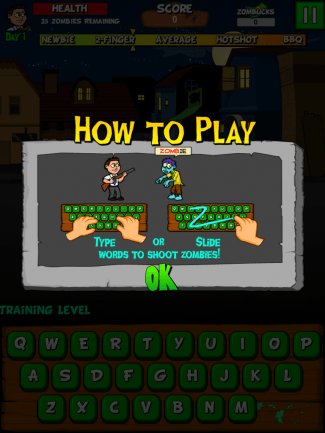 Zombie Typomaniac’s next problem is the opponents it throws your way.  For some strange reason you will be faced with flocks of angry birds that launch themselves at you (ha ha get it) in waves that are at first annoying, but as you fight tougher enemies they just become maddening.  Later on you are faced with even more annoying enemies that move to the middle of the screen, crowd together and then throw things at you.  These projectiles need to be typed off screen along with the birds and walking zombies. This often led to me becoming very overwhelmed.  There are supposed to be special support items that drop to help with these massive waves, but again sometimes they just don’t show up.  Other times you will find that they come in packs.  Unfortunately, they don’t last very long on screen and can’t be used together.

The difficulty issue isn’t even later on in the game. This happens very, very soon after starting.  I have had a few other people play this game and the results were the same.  First they would ask where is my Bluetooth Keyboard, next they would play for a while, and then find themselves quickly becoming frustrated not only with the sporadic interface problems, but also with the smaller keyboard and cheap enemy encounters.  Now these people type way better and faster than I do.  They made it far, but in the end everyone decided to walk away in frustration and annoyance.  This leads to Zombie Typomaniac’s next problem.

Zombie Typomaniac only has one profile.  So if you are a person who doesn’t type very fast, and someone who is a typing speed demon plays your game, the game skyrockets in difficulty.  The only way to slow the game down again is to die dozens of times to  try and lower the speed.  This game is desperately in need of separate profiles as well as the ability to adjust the difficulty in game.

I seriously wonder if the developers played through the game much on an iPad before releasing it for the iPad.  As is, it just isn’t fun and definitely not worth the buy in price in the state that it’s in now…  This game can be so much better if these problems were addressed.  Also adding a learning to type mode with Bluetooth Keyboard support would be a huge, huge draw for Zombie Typomaniac. There really is a great foundation to a great educational program here.  I see the potential so I want it to be better.  If the developers are serious about this game, I really hope they update Zombie Typomaniac soon.