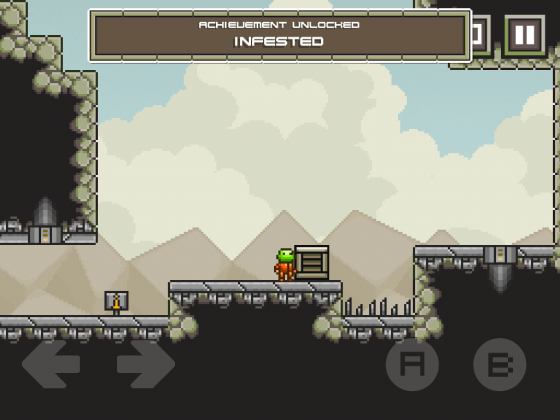 Control humans to get through the levels.

Sort of, not really…

Infestor  is available on the iPad, iPod touch and the iPhone iOS 3.0 and later. Normally I prefer gaming on my iPad 2 but Infestor is best played on a smaller device.

Infestor is an interesting platformer with great potential, but it never quite feels fleshed out or properly tested.  It will keep you busy for a day or two with on again, off again play. Sadly there isn’t any replay value here.  It just goes stage to stage with no real feeling of progression or story.  On top of that there is only one background and one core level theme, which leaves you feeling like you are playing the same stage, over and over and over.

The first 30 or so levels are such a breeze you really don’t get any feeling of accomplishment or progression. It gets boring pretty fast.  Infestor worked best for me taking breaks, lots of them. It has an interesting plot, but you get one good dose of it at the start of the game and a quick conclusion at the end.  I think this would have worked better if every ten levels or so there was some plot going on.  It would help make you feel more invested in the Infestor. Then the ending would have been a lot more satisfying. Sadly, this isn’t the case.

Unfortunately, Infestor suffers from a lot of bugs.  Normally I wouldn’t say this is a major problem since most publishers fix these things pretty often. Unfortunately, it seems Woblyware & Ravenous Games forgot about fixing their last outing in Beatdown.  That was released with a crashing bug that was NEVER FIXED.

I reached out to Ravenous Games and was told an update was incoming to fix a few of the problems we have found.  I’ll update this later on if that fixes a lot of the problems or not.  Sadly I was also told that there were no planed updates for Beatdown!… 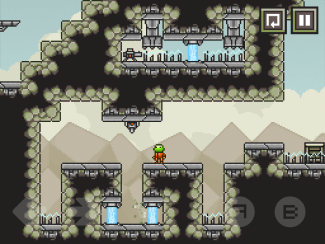 One choice is cheap death

With infestor being released with this many bugs I’m really worried about the quality of games being released by Woblyware & Ravenous Games on the iOS platform.

You play a blob that needs to take over humans to get though the level.  Different humans have different abilities that you will need to get through the levels.  The  game is VERY LINEAR to a fault.  You aren’t really given real freedom in game to choose a path, or try new ways in beating most levels.

The controls aren’t very comfortable on the iPad. Infestor is all right in the beginning, but later on in the game your are given the opportunity to shoot with a gun and the shoot button is almost in the middle of the screen.  This game really wasn’t optimized for the iPad in this regard.  I’m wondering if they even play tested it before they posted it on the app store.  During my first play through every single time I took over someone’s body (the point of the game) I was treated to the achievement popping up for taking over my first body.  By level 12 I had to shut Infestor off because I was hoping it would fix the achievement spam.  Sadly it did not.  There are more bugs in the game.  When jumping on a platform near spikes it’s common to die. Even though you didn’t touch the spikes at all you still were somehow too close to the edge. Also, when controlling the pushing human you quickly figure out that pushing a crate right up to any surface is asking to restart a level because you will find yourself frozen in place. 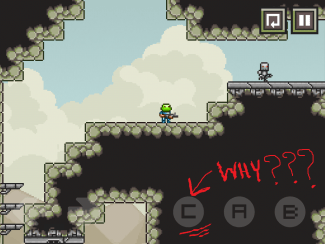 Infestor feels like it wasn’t tested at all before release.  There are too many bugs and the controls just aren’t comfortable on my iPad.  These are things that should have been picked up before being put up for sale.  Frustration is also added knowing Beatdown was released buggy and never patched. I’m pretty sure I’m stuck with a broken .99 cent Infestor that is most likely never getting patched.

This is an interesting retro platformer with a lot of flaws, but still some good ol’ platforming fun.  If you’re in the mood for a straight forward game that can be knocked out in a weekend and doesn’t require too much thought, this is for you.  If you’re on a budget and looking to stretch those .99 cents as far as you can, then no, this game isn’t for you.  Sadly there just isn’t any replay value here.  From here on out for me Ravenous Games aren’t an instant purchase.  Releasing games this buggy is a fast way to lose your fan/consumer base.  I hope they realize what they are doing and stop this troubling trend of sub-par releases.