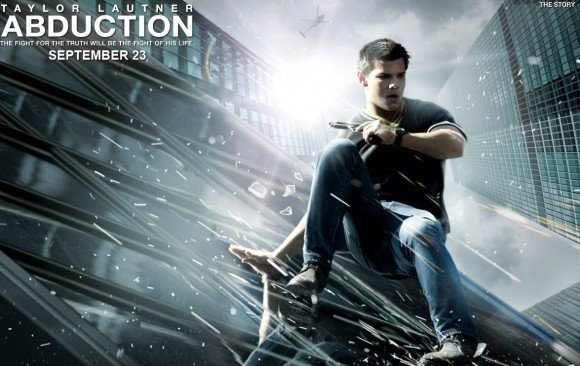 Abduction is available on DVD and Blu-Ray. While it’s not necessarily a pretty movie, it’s nice to watch it on Blu-ray.

It’s a fun action movie that doesn’t require a lot of thinking and has a pretty AND capable girl sidekick. The plot is predictable and there are some head-scratching moments, but for the most part it’s enjoyable. It’s kind of like the Bourne series, but for teenagers.

In all honesty, I wasn’t going into Abduction with high hopes. I don’t really find Taylor Lautner that attractive nor does he seem like an action-y kind of guy. There’s not a lot of depth to this movie, but it provides some good action sequences and is an overall fun movie. I mean, there’s a car chase scene and at least two explosions, what more could you ask for? There are a handful of good action sequences, but for the most part it’s a lot of running. This makes sense because the main people involved are teenagers, not some super spies. I actually like the fact that Lautner’s character doesn’t suddenly become badass. Sure he knows how to fight, that was established in the beginning of the movie, but he’s still scared. He’d rather run than stay, fight and potentially get killed. It makes sense.

Aside from that it’s also refreshing that the love interest of the action hero is actually competent. She is able to free herself when she’s tied up AND she doesn’t get in the way too much. I’m not going to say that the acting was amazing or that the storyline was compelling, it certainly wasn’t. However, it was fun enough so long as you weren’t expecting anything. There are no unexpected turn of events, you pretty much can figure what’s going on but it’s not really about the suspense.

I personally don’t find Taylor Lautner attractive, but if you do, then there’s plenty of eye candy.

In the beginning Taylor Lautner’s character is eyeing Lily Collin’s character hard…it makes him seem really creepy. There are a couple times where I’m scratching my head and wondering really? But so long as I didn’t think too hard, I enjoyed the movie. The movie was also a little on the long side and there are definitely some scenes that could have been shortened.

Bottom line: If you’re expecting an amazing action movie with a great story, then you’ll be disappointed. If you’re looking for something that’s fun to watch without concentrating too hard the rent Abduction.