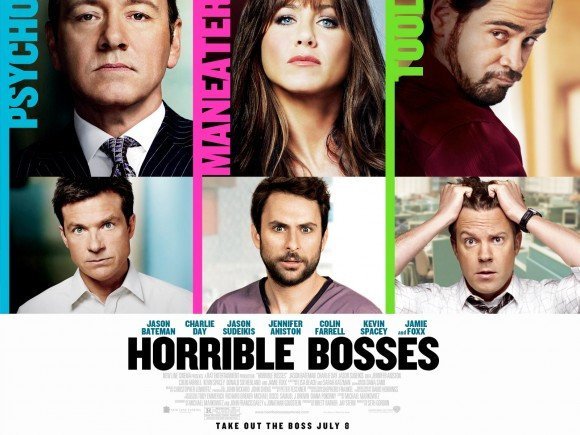 Horrible Bosses was fun enough so long as you don’t go in expecting much.

There’s not a whole lot of eye-popping cinematics so you can definitely get away with watching Horrible Bosses on DVD, though we saw it on Blu-Ray.

As always Kevin Spacey plays an amazing a**hole. If he were my boss, I would certainly be going crazy. I also enjoyed Jennifer Aniston as the sex-maniac boss. I definitely have not seen her in that role before and she seemed to be enjoying herself. The cast in all was really good and they seemed to be having fun and not taking the movie too seriously. There was some excellent dialogue and the chemistry between the three leads was unmistakable. While not as dark as it could have been, that suits me just fine as sometimes I’m just looking for a laugh. This movie certainly provides plenty. There are some excellent one-liners here and you’ll most likely be quoting some of them well after the movie (I’d like to bend her over and show her the 50 states). If you find race and sex crimes offensive, then this movie most likely is not for you, because the movie certainly touches upon everything. There’s also a certain level of truth Horrible Bosses, especially for office workers. In essence, your boss “owns” you. You are under their whims and if they decide to promote you or fire you, there’s not really a whole lot you can do.

I really wish that Colin Farrel had more screen time. I rented Horrible Bosses specifically to see him play the role of douchebag, and he delivered, but there just weren’t enough scenes with him. Aside from that, I really started disliking Charlie Day’s character mid-way through the movie. He just acted too stupid. I get that it’s a comedy and they’re supposed to be inept, but still…add that to his high-pitched voice and it almost turned me off of the movie. Luckily Jason Sudeikas and Jason Bateman do a good job reigning it back in. The ending was weak, but the rest of the ride was enough fun that you can forgive the forced ending.