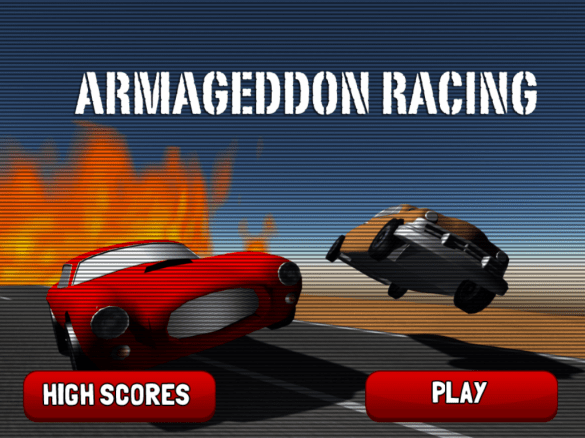 Avoid Armageddon Racing.  I played it on my iPad 2 and it was just horrible.

Armageddon Racing is free, but still not worth it.

I tried.  I really, really tried to play Armageddon Racing.  It was about an hour after trying to play Destruction Highway. If it wasn’t because I had to write this review, I wouldn’t have given this game more than a minute. It’s a broken time waster with no real point.  I’m pretty sure it was just created to show you ads on the bottom of the screen. This has to be one of the worst “apps” I have ever played. No surprise it came from the same folks who made Destruction Highway.

The point of Armageddon Racing is to go straight, hit cars for points and drive over ramps for speed boosts.  There is a wall of flame following you so you can’t slow down too much.  Sounds simple right?  The controls are so bad I wanted to load up Destruction Highway again.  The driving mechanics are just beyond broken.

Unbelievably badly.  You cannot see in front of you most of the time.  It’s a weird side angle that makes it almost impossible to see in front of you.  Then for some reason the developer added a lot of barriers that you need to avoid.  Why? Who knows… I really don’t understand why Armageddon Racing was uploaded to the App Store this messed up in the first place.  The biggest problem is the camera, then you get to floaty controls and broken everything else.  It’s just a steaming pile of fail cake with fail filling that just tastes of fail. 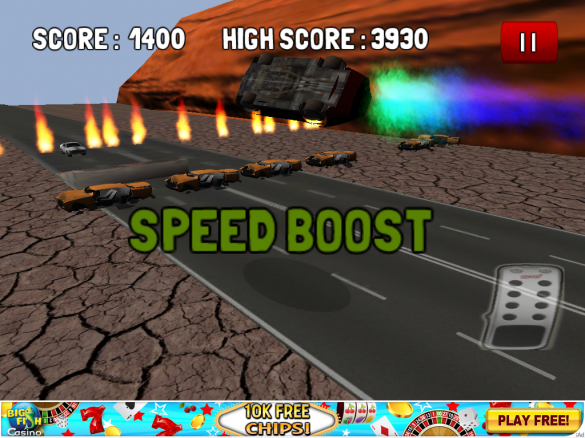 Look at the picture above. I hit a ramp (like I was supposed to do) and proceeded to get a speed boost… Then the car started flying around in weird circles (Not supposed to do that) then I flew uncontrollably head on into the wall of flames… Really???

This has to have just been created for the ads on the bottom of the page.  I just can’t believe some companies actually paid to have advertising on this mess.  I can’t imagine anyone took the time to test this, let alone play it…  It’s just broken on pretty much every single level.  You endure Armageddon Racing, you don’t play it.  Then you delete it, look up what else the developer has created and then avoid it to.

This is the Second of two horrible games I’ve played from Mation Media.  There won’t be a third.

Believe it or not there is a paid version of this game… I can’t imagine actually giving any money to this developer.  I recommend no one does. 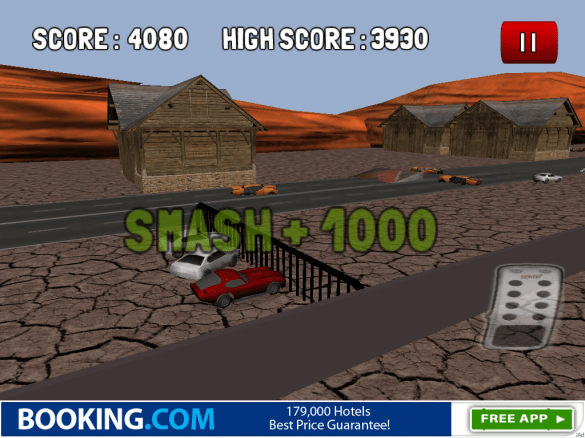 Congrats on that wall of fail