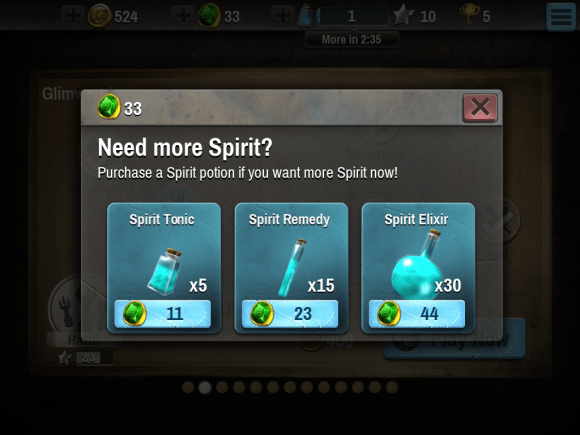 No spirit no play. No gems not spirit. No pay, you wait.

Avoid Battlestone. I played it on my iPad 2 and it’s too bogged down by forced in app purchases to be enjoyable…

Battlestone is a somewhat  interesting game kneecapped by a horrible pay or wait to play system. By the time I was getting into playing Battlestone, I ran out of energy and needed to wait about a half hour to play again. A half hour later Battlestone didn’t seem to be worth the wait. Then as I was going to fight a boss I ran out of energy again. 20 minutes later after I defeated the boss and went to the next area. It was the exact same gameplay and pay or wait to play.

This leads to the next problem. I can pay for energy refills, but no one time boost to at least increase my playtime. So again pay to play, over and over and over again. The problem is, Battlestone isn’t worth it. The gameplay is boring and repetitive and the ability to upgrade your character is painfully slow unless you pay more into the game.  But those aren’t the biggest deal breakers. Battlestone is online only. Usually, this wouldn’t be too much of a problem, but Zynga has recently shut down some of it’s other online games. So I don’t trust paying money into something that might not be there next year.

Maybe there is more depth to this game, but playing 5 minute stints didn’t help me see it.

How does it play & Why it fails:

Not good. Very Laggy. Swipes fail when trying to attack, moving is unforgivably awkward and the camera angles leave you wondering where things are. I’m totally shocked there isn’t a zoom out ability here that stays zoomed out. Constantly having to readjust after moving is infuriating. This especially hurts ranged classes that need to move around often. 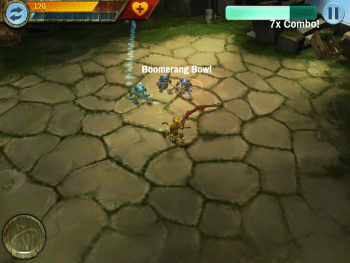 Classes aren’t really explained at all and at the end of the day it’s just a numbers game.  When I got my first ice wizard I had no description waiting for me to tell me why this character was awesome or not. So instead of wasting my limited energy on what could very well be a trash character I used it to upgrade my rogue. A rogue who seems to move and shoot the exact same way as the archers. Again no class info available.

Earning currency is intentionally slow. Gold drops are low, gem drops are rare and Battlestone drops are very rare. You can Earn Battlestones in PvP matches, but they aren’t very fun. It’s not really PvP but an AI with some other person’s name attached.

The PvP aspect of the game fails since as a caster I just needed to tap the heck out of my PvP AI opponent until dead. It wasn’t until I was fighting the berserker/warrior types that I would sometimes try and use distance.  Unfortunately, said warriors come in two flavors it seems: Cannon fodder and OMYGODOMYGODHEISGOINGTOKILLMEANDIMDEAD. Since the camera is all but useless in moving around and the Warrior geared and leveled up can just take your attacks like nothing, it’s another imbalance that’s horribly frustrating.

The biggest problem really is the pay to play experience destroying your ability to even enjoy the game. I don’t see how this was released. Wasn’t this play tested? Someone should have called this out before it was launched. It’s a free game, but it doesn’t give you and reason to pay into it. Everything about it just screams cash grab. It’s a shame too because the game has promise. As is, it’s just an app with it’s hand out begging for cash. Avoid.