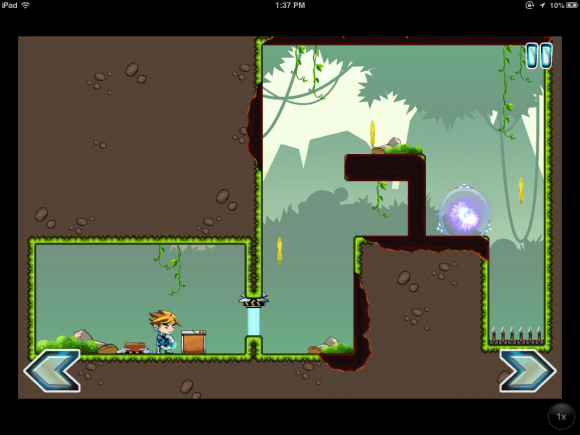 Yes if you have played Portal before.  If not you are in for a very tough game.

Better than Portal is iPhone only, but plays just fine on the iPad. Personally I enjoyed it more on my iPad after zooming in. 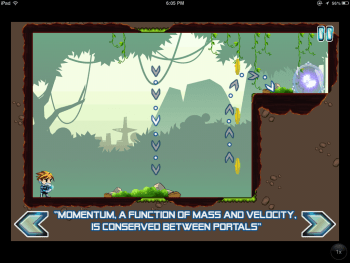 Better than Portal is a very impressive 2D homage to a 3D first person puzzle game called, well, Portal.  Just like the 3D game you will be using your brain to get from point A to point B. You start off with a brief tutorial, then you are off on your mission!

I really loved this game. It was a fun and frustrating ride that took me a few days of on again off again play to beat. I have to say it challenged me almost every step of the way. You can beat it, but you are going to have to work to do it. As hard as the game was, there was also that addicting euphoria that followed finally beating the challenges. The controls are simple but perfect and the presentation is equally good. Get Better than Portal if you are looking for a new type of interesting 2D puzzle game.  You should especially get Better than Portal if you just want some Portal fun on the go. The levels are fast, making it perfect if you just want to pick up and play a game on your commute to work.

How does it play & Why it works:

At first glance this is a very simple unassuming game. How hard can it be? 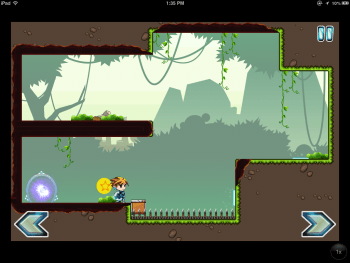 This took me a half hour.

Unless you have played Portal you are going to be in trouble here. The controls, while minimal are all you need. The game does have a lot of trial and error, but so does Portal.  The only thing lacking in my opinion is a better tutorial for new players.  If it had that and was a universal game I can easily see Better than Portal being the next huge deal in the iOS App Store. If you are able to stick with the ever increasing difficulty, you will experience a wonderful feeling of accomplishment on almost every single level later on in the game. I really hope more areas are added in later on.

As is now I have no problems recommending for people to buy Better than Portal.

Better than Portal could use a few more tutorials.