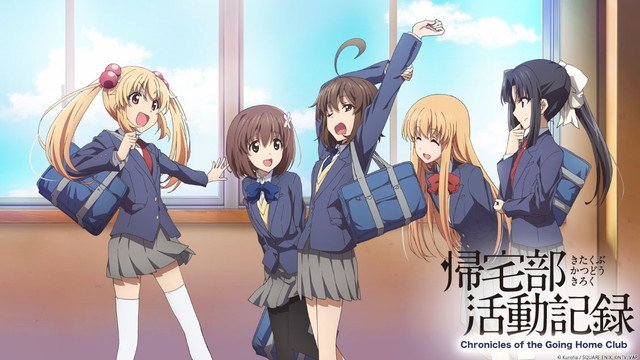 For the most part, yes. The Chronicles of the Going Home Club is a light-hearted and often times ridiculous anime.

As far as I know Crunchyroll is the only place where you can legally view the anime. Chronicles of the Going Home Club is part of Crunchyroll’s simulcast streams, so you get new episodes weekly.

Chronicles of the Going Home Club is an over-the-top slice-of-life anime. There are plenty of other anime references to keep people laughing (Dragonball reference anyone?) and plenty of jokes. The anime seems to follow a pretty standard manzai comedy routine where Natsuki is a the straight man and the rest of the girls in the club act as the funny men. Regardless of this fairly classic setup, the anime provides plenty of laughs throughout. Sure, it might get a bit ridiculous at times, but the best part is that the show acknowledges the craziness of the situation through Natsuki – the audience analogue. Some jokes get repeated but again, the show references it. It’s a lot of fun and it’s pretty obvious that the creators of this anime  are having a lot of fun.

There are a lot of ridiculously humorous moments that will catch you by surprise. Just when you think things have gone back to normal you’re hit with another wave of funny. Each episode goes pretty quickly and is generally broken up into 4-5 different sections that slightly relate to the previous sections. I like the setup because you’re kind of getting 4-5 different episodes in one. I also enjoy all of the main cast as they each have a very different personality that plays well off each other. While there’s not a lot of actual story progression, Chronicles of the Going Home Club is a fun and easy watch.

Like many anime, Chronicles of the Going Home Club suffers from the dreaded same face syndrome. The only way to tell these girls apart is from their hair color and style. There are also times when the jokes carry on a little too long and it can get a bit tiresome. That being said, I’ll still gladly add this series to my weekly watch list.

Check out our other TV/Movie reviews.