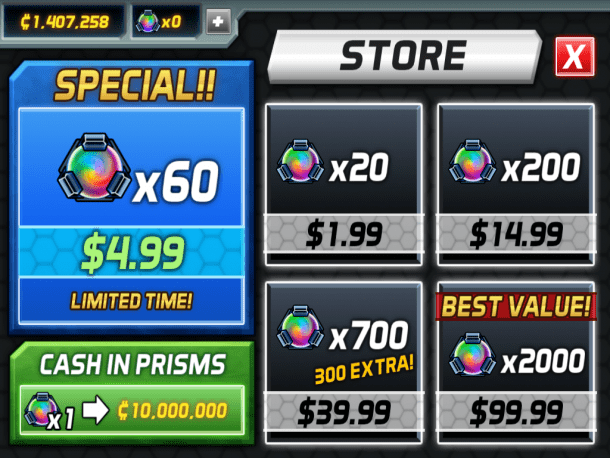 And I paid for this.

Is Colossatron Worth Your Time?

Not for .99 cents, but I am sure this will eventually go freemium.

Colossatron is a universal app for iOS 5.1 or later, Google Play, and Amazon App Store. With everything going on I think Colossatron is best played on a tablet. So where do I put the yellow node?

Colossatron is an interesting match three game that unfortunately seems too driven to make you spend money to be much fun.  What starts off as a light hearted game that to destroy the world, soon becomes a mess that has so much happening on screen you can barely see your world destroyer. Beating levels soon depend more on luck and continues than how you build your Colossatron.

The hardest pill to swallow here is you don’t control Colossatron.  Colossatron will take the seemingly worse possible paths. Often times totally swamped by enemies. Often keeping the enemies you need to kill off screen. The farther you go into the game the worse Colossatron’s movement get.

The only thing you do control are where you place your powerups. Each time you match three colors the power up will merge to one with a higher attack and defense level. You are also able to mix certain colors to create different attack nodes. Again this is all moot when the screen gets swarmed with so many enemies you can’t actually see Colossatron anymore.  This makes powering him up less about strategy and more about just throwing all the power ups you can before he explodes. Frustratingly this becomes the norm later on as you play the game.  It’s not fun and it’s not fair.

How It Plays & Why It Fails: Colossatron  is a game that takes some getting used to.  I didn’t immediately love it, in fact during my first few play sessions with it, I didn’t like it much.  As a player you don’t get to “control” Colossatron, you merely power him and support his world destroying rampage.  It takes some time to think of this as a match three game with a world destroying twist.  Once you get that down things start being a little more fun. Then you realize that the game difficulty ramps up way faster than your upgrades do,  making you farm the special in game currency often while beating you over the head with the ability to “buy” more.

The money you earn in game comes in huge numbers, but when fixing and upgrading Colossatron in between missions you quickly find yourself running out fast.  You’ll have to depend on repetitive grinding to get ahead in the game while constantly being reminded you can “buy” more.  This wouldn’t have been an issue for me if it was a Freemium game to start with, but this is a paid app.  I think Halfbrick forgot this.

Colossatron just feels too underpowered.  Even if you take the time to upgrade as much as you can.  Often times you will be totally swarmed to the point where even your maxed upgraded nodes are just shredded almost instantly.  Your healing nodes seem to do nothing.  Your attack nodes quickly become useless in the face of the massive numbers you are up against.  Numbers of enemies that also seem to become tougher as you go alone.  Sadly your firepower doesn’t. You can upgrade Colossatron’s node shields, but their overall power remains woefully pitiful even as every enemy you face seems to have gotten tougher.  If Halfbrick only allowed us to be able to upgrade our firepower as well this review might have been totally different.  As is now, Colossatron is an interesting concept that fails badly in its execution.