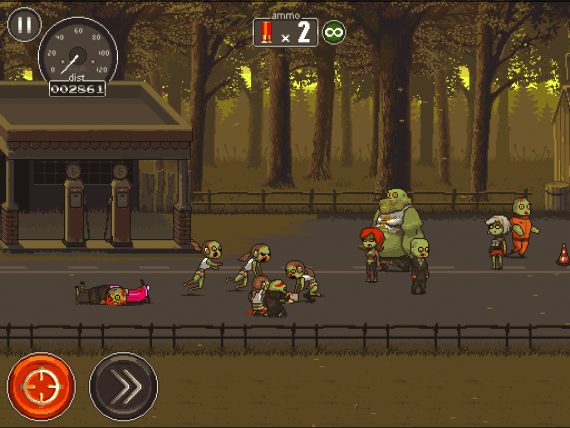 You will feed the zombies. A lot.

Dead Ahead  is an universal app for iOS 4.3 or later. I found my fingers taking too much space to be playable on my phone.  Even though I still didn’t enjoy it on the iPad, I found it works best on the larger screen.

Dead Ahead has some promise gameplay wise, but it’s just not fun for me. Dead Ahead is an endless runner that puts you and, later on, your girlfriend (or some other woman you can buy) on a scooter as you try and escape the zombie horde following you. 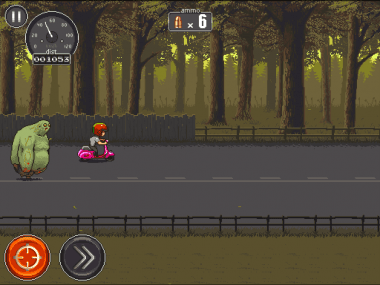 He laughs at your pistol.

The pistol you start the game with is totally useless against one monster who appears about a minute into every game you play. You have to get used to dying every game until you can afford the shotgun. This is not a fun way to start off on a new game.

Then you will find yourself battling luck to pass through obstacles that are drawn in such a way that it’s difficult to steer through them. The problem is they are drawn into the game in 2D. So you really can’t tell the difference between safe gap between cars and a frustrating crash waiting to happen.

Stronger weapons and vehicles cost ridiculous amounts of in-game money that show you just how this Freemium app plans to try and get money out of you. Sure you can grind the purchases out, but it isn’t worth it. Unfortunately, there aren’t any in-game purchases I feel are worth me spending my real money. Obviously the  gameplay is frustrating and repetitive.

I do enjoy the Zombie who has the free hugs sign on her. The art, animations and music really are cool. It’s a the actual gameplay wasn’t more fun.

This is another example of Freemium gaming that just didn’t spend enough time being testing before shipment.

The controls are interesting but seem to clash with the different kinds of enemies and obstacles you face. Having your thumb on the right seems to block some obstacles from your sight until the last second if you are on a smaller device. Also, the shoot and accelerate mechanic your ability to deal with enemies coming from behind. Add in enemies that you can only take down with certain artillery and you have a play wall that you cannot pass without newer weapons or higher ranking. Unfortunately the early levels are very, very hard to do. Progressing in this game isn’t about skill, it’s about starting painfully weak and dying over and over and over again.  Are you are willing to endure this masochistic torture? Sure you see the tangible reward there, but it’s blocked off by more and more unfulfilling gameplay. 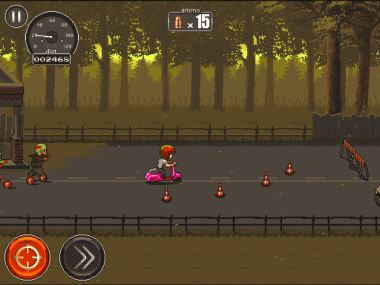 I feel like this could have worked if there weren’t any enemies who can just easily catch up to you and stomp you if you aren’t equipped with the right gun. If you were able to lead them into other cars or dodge them until you are able to take them down it would have felt more balanced. As is, you just run into forced unavoidable gear checks with stronger and faster enemies.

Very often you will find some barriers only passable by small ramps that you will not have enough time to get to if you are speeding to avoid certain enemies.  This leads to more cheap deaths. There are, of course, boost that resurrect or help you in-game, but they are horribly expensive.

This is a blatant cash grab of a broken game.