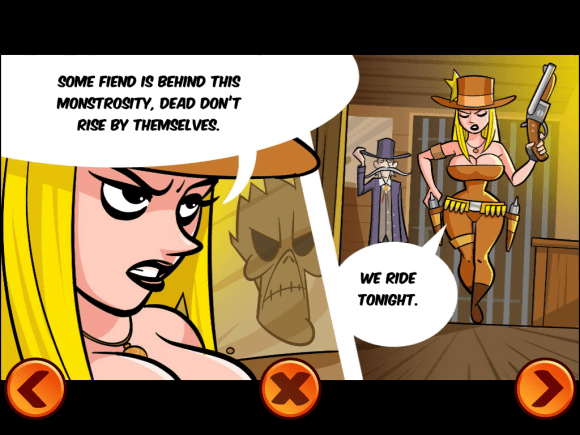 That is one hell of a corset.

Jane Wilde is available on the iPad, iPod touch and the iPhone iOS 4.3 and later. You get the same great experience with all devices. As always, I prefer gaming on my iPad 2. 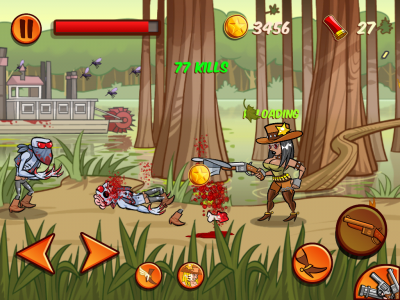 DJane Wilde. The D is silent.

It isn’t too often I find myself in the middle of a Freemium game thinking that I have to buy something to support the developer.  It  happened with Jane Wilde and Level Bit.  Not to spoil the experience, I held off on the coin costume package and just bought the dJane skin.  The D is silent.

Jane Wilde is a Freemium game with a lot to offer.  It isn’t perfect, but it’s fun enough to keep you coming back for more long after you finish the story mode.  But even when you are done with the story mode there is Survival mode and Hard mode.

For a free game you are getting an insane amount of content and value.

Jane Wilde is a 2D side scrolling shooting game where you go around killing everything that gets in your gun’s sites.  There are even in game comic panels that tell the story.  Get ready for a fun shooting experience.  The only issue I have is that Jane is a bit (a lot) ridiculously proportioned. I can’t help think back on Lara Croft on the PS1 when I play this.  If you don’t mind a buxom bombshell as your protagonist you will have a blast with this game. 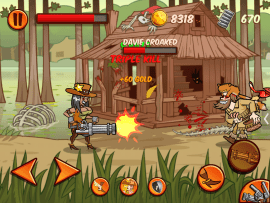 The controls are spot on.  The pacing of the game is perfect.  The art is really simple but fun.  I really do love the hand drawn look.  The boss fights do require some trial and error, but they are never cheap.  The weapon upgrade system gives you a good feeling of progression.  The best part is the upgrades never cost too much and you are able to earn coins easily. It might take a little grinding in the previous levels or maybe some time in survival mode, but it never feels like a chore.

If you want, you can buy Jane Wilde some new outfits.  Sadly these are only available for real money, but again this is a game that actually deserves some of your hard earned cash.  It would be nice for a few cosmetic items to be purchasable with in-game gold.  Hopefully that happens with a later update.

The only Issues I have with the game are the occasional lag and a few collision detection problems that seem to happen randomly.   They are not game breaking, but for a game that’s otherwise very polished they can be annoying at times. 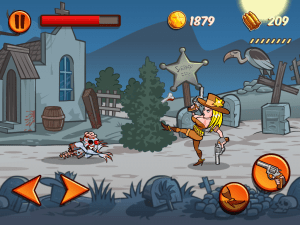 Jane Wilde is a fun, challenging and overall addictive side-scrolling shooter packaged with several other modes to help ensure plenty of replay.  On top of all that you get upgrades and costumes.  With all the content this offers I have no issues at all recommending that all of you pay in. Honestly, you can beat the game without spending a dime of your money and still do the extra modes.  You can’t say that about a lot of other Freemium games or non Freemium games that have in app purchases.

Another cool part about this game is being able to watch commercials for a great amount of in game coins.  That really helps when you need some ammo in a pinch!

The gameplay might be simple, but it’s got that good ol’ classic fun gameplay down and it keeps you coming back for more when you just want to shoot some zombies.  The final win for me is there is actually a story told with good art in a great way.  That totally just makes the game an experience that you want to finish.

The newest update fixed all the problems I had.  JUST GET THIS GAME!!!!!

This is what a Freemium game should be.  Sure it has some bugs, but it’s fun, free and totally doable without grinding like a sucker to afford or spending real cash.  If you do feel like paying some cash out to help the developer and advance farther I do like the idea of the coin costume combo.  Not too pricy either.

It’s really great to see Level Bit adding new modes and continuing to tweak the game.  It makes me happy that they care about the game they released and are listening to consumer feedback.  Great job guys.

New levels, costumes and weapons.  I would adore more customization options for Jane Wilde with in-game currency.  I can totally see this game supporting expansions that add more of everything to the experience. 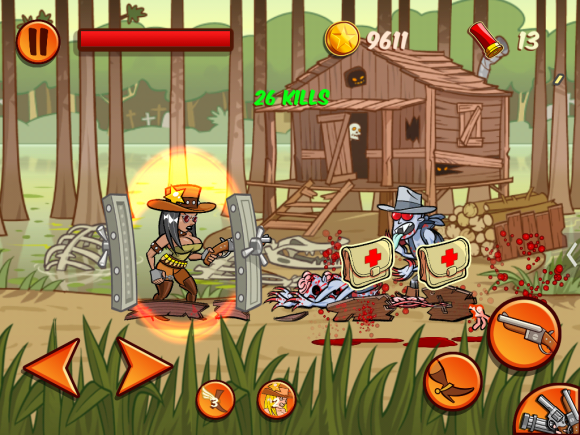