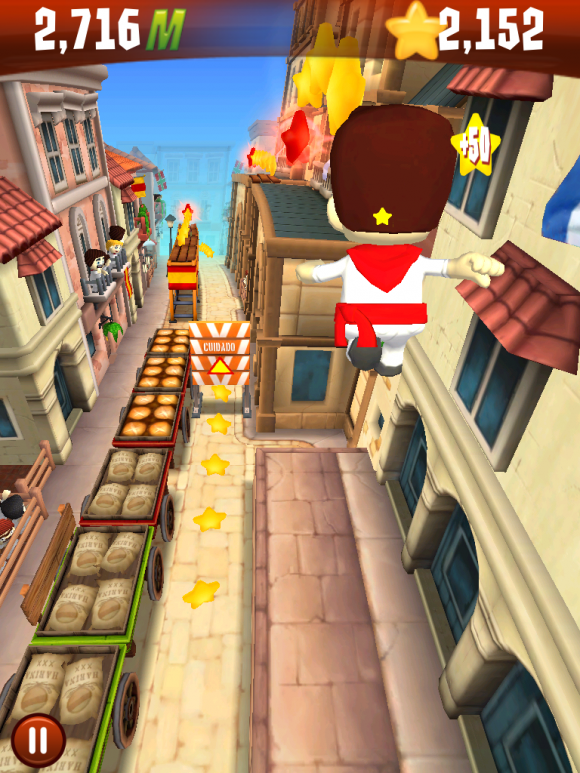 Running with friends HD is iPad Only.  There is a version for the iPhone and touch’s here.   As always, I prefer gaming on my iPad 2. 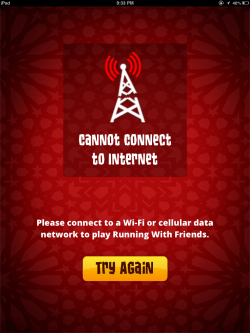 One of the best endless runners on the iOS.

Just get this.  This is that new thing you and all of your friends will be playing.

Running with friends HD is an endless runner that takes place in the streets of Pamplona, Spain. It’s no surprise that this game comes from the geniuses who created Words with Friends and tons of other addicting Facebook and iOS games. Running with Friends is one of the best endless runners I have ever played. If it had an offline mode It would be perfect. Sadly it doesn’t. But Zynga if you are listening I will pay for an offline mode. TAKE MY MONEY!!!!!

The only slight issue I have with the game is the occasional lag.

The controls are perfect. The pacing of the game is amazing. The art is really cute and  fun. The only issue I have with the game is the occasional lag. It’s not game breaking, but for a game that’s really fast it can be annoying to have that occasional freeze happen. Thankfully, Running with Friends never crashes on me. 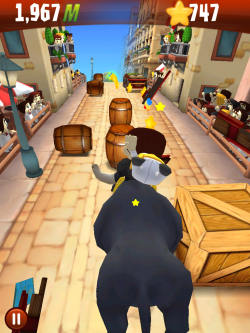 You get to ride the bulls

This is one of the few running games I have ever played that rewards players who are really good by slowly introducing new hazards and obstacles. When I first saw the bulls on mopeds I just laughed so hard I lost the game. It’s insane how much humor is packed into this game.  I love the little touches like signs written in Spanish and some Spanish man voicing certain things. It’s just a bunch of little great touches that really help make this game shine brightly.

For hard core endless runners players like myself (I feel like you can say hardcore anything these days) there is a lot to be found. I love the risk/reward of the alleys you can choose to go into if you are feeling brave enough. They really spice up things. I love the slot wheel mechanic before games you can do or not do depending on how you are feeling. If you do choose to use it, it totally changes how you play the game if you want to score high. You find yourself going after the spin bonuses like jumping on bulls or sliding more often to destroy obstacles. Maybe it’s even worth it to continue if you lose, using gems if you have the awesome 2X your final stars roll going for you.

I usually don’t care about leader boards and going against people in online games too much. Still, there is something about putting your run score right up against someone else’s that makes you either just ignore it if you aren’t in the mood, or try way harder. I find myself doing both with Running with Friends. There are people who I race against that I just don’t care about. Then there are those people….. Those ##### people who I get worked up about when I see it’s my turn with them. Time to mute the TV and shush Jasmine. I need to win! 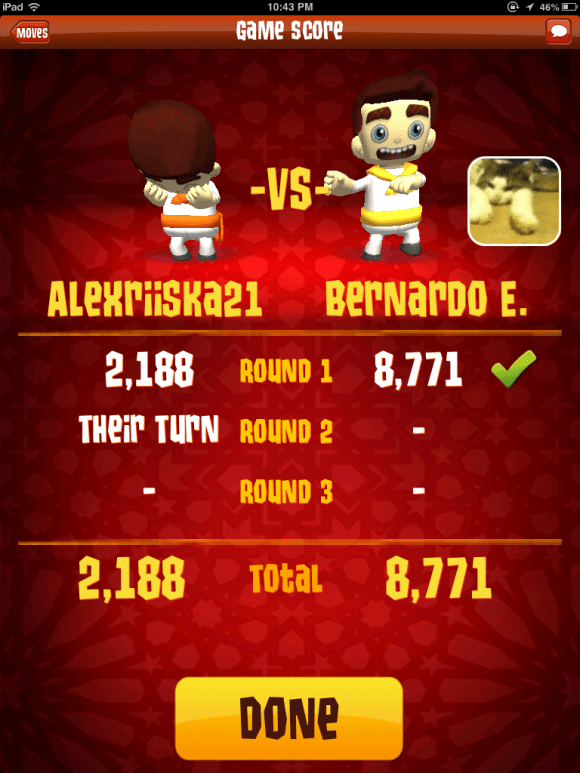 The lag issue needs to be fixed. There needs to be more content I can spend my gems on and make me want to spend my real money on. As is the game is amazing, but honestly I don’t see many in app purchases that are calling to me. I want to support this awesome developer but as is right now I’d like more variety in the purchasable content.
What would really sell me an in-app purchase for offline play.  I would spend three bucks in a heartbeat.

Zynga did an amazing job with Running with Friends HD.  Sure it has some occasional lag, but it’s fun, free and totally enjoyable without grinding  or spending real cash.  Just download this.

New levels, runners and power ups.  I would love nothing more than to buy an offline mode for this game.