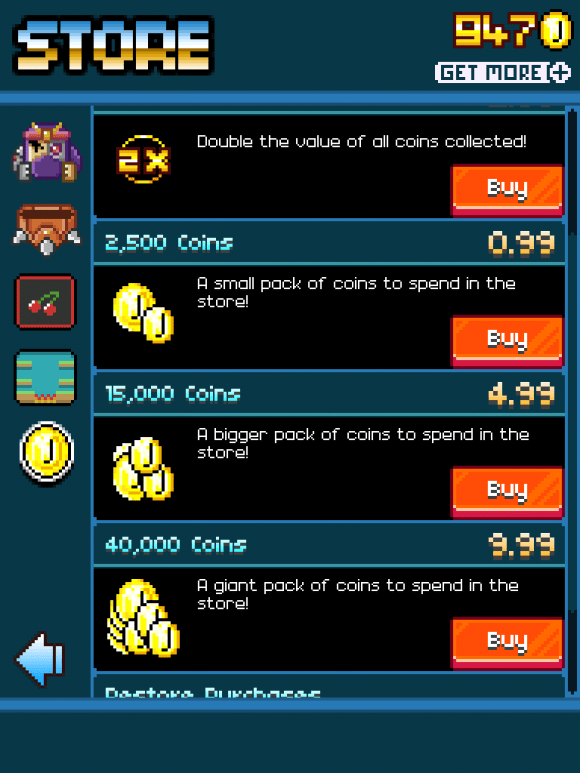 SlamBots is an universal app for iOS 4.3 or later.  As always I prefer gaming on my iPad.  Except for this… This just isn’t worth being on any of your devices. 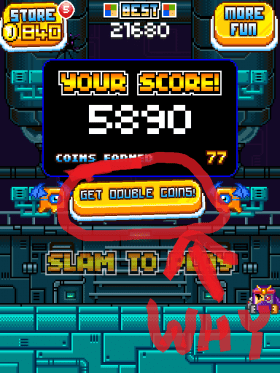 I paid for a coin doubler ad.

SlamBots is a repetitive shallow game that seems to have been built as a Freemium but for some reason it costs $1.99.  Great job Retro Dreamer, you fooled me out of two bucks.  /slowclap

SlamBots is a bouncing game.  You don’t SLAM! you bounce…

Your character bounces up and down and the point of the game is to survive as long as you can while more and more enemies spawn in the incredibly cramped space.  Each enemy drops about four gold.  Sometimes six if you are lucky.  You then bounce, kill and die until you save up thousands upon thousands of gold for upgrades, other level, other characters and bounce vehicles. You also get the pleasure of seeing an ad for the coin doubler every single time you play a game.

It’s not worth it.

If you want an insanely fun arena game where you actually get a feeling of character progression while using 2D gaming skill get Spell Sword.

How does it play and why it fails:

I just paid $1.99 to have an ad for the .99 cent coin doubler on every start screen for the rest of the time this mess is on my iPad before deleting it. 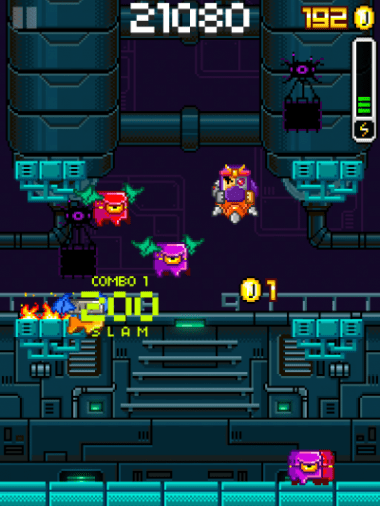 I swear this is way less fun than it looks.

You just bounce up and down.  The enemies fly around you, move faster and can move off screen and teleport to random locations. So don’t expect to live very long. The gameplay ratchets up in difficulty really fast and there is no real strategy to the game.  Sure there are “powerups” but they are all but useless because you just bounce up and down.

Like I said above you only have one level start off with. One tiny, boring level.  To call it a level or an arena seems like a sad joke…or a lie. It just doesn’t fit. You start off in one tiny space.  You will hate that space.  If you want another it will cost you. Then you can only buy two other tiny pathetic spaces…. Sooo yeah…Not much replay there.

To unlock a useful shield powerup will run you 5000.  The rest of the powerups are pretty much useless.

This isn’t a fun game worth $1.99 because you just bounce up and down in a tiny space that you will grow to hate.

This is an interesting game concept. I can’t call it a demo since there really isn’t much here. Maybe one day Retro Dreamer can use my $1.99 investment in SlamBots to make a full game. Who knows.

I know this review is a bit snarky, but I just paid $1.99 for a tiny space that I just bounce up and down in and hate. I can’t see the fun in this besides the fact that someone else is laughing somewhere knowing I paid $1.99 for this game…