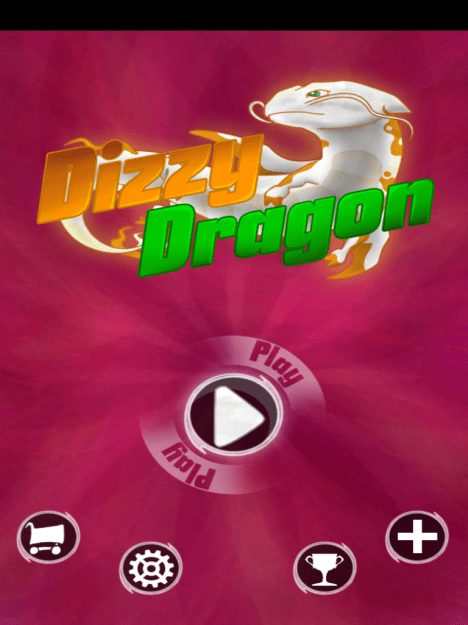 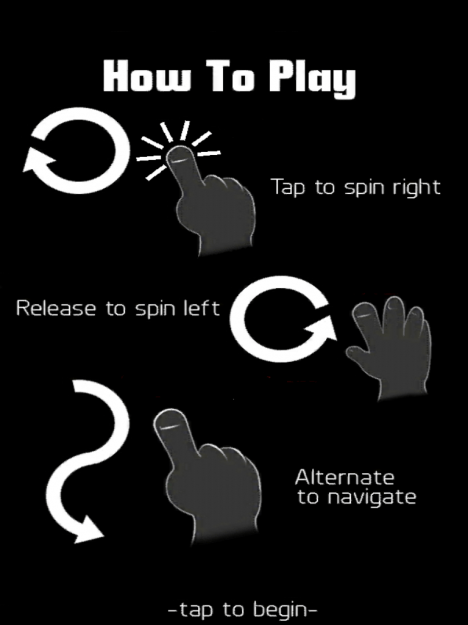 How to play Dizzy Dragon

The iPad. It’s available for all three iOS devises but I can’t imagine playing it on anything other than the iPad. I feel you need the big screen so you don’t block any of the action with your finger.

Dizzy Dragon is a very challenging game that requires an immense amount of patience. This is for a player who is willing to devote the time it takes to get used to the quirky controls. It’s fun and interesting, but you will be challenged and you definitely feel a sense of accomplishment when you get further along in the game.

It has some problems but in the end the game strengths far outweigh them.

I want to let you know I emailed the creator of the game and explained my issues with the game. The very next morning he assured me they are working on a patch to help it run more smoothly and appreciated my ideas and criticisms. That’s great. Seriously, they care. It’s refreshing to have the people behind the game email you promptly and let you know they want this game to be as great as possible. I have to say that email exchange definitely helps me feel confident in recommending this game. He even referred me to the blog he created to chronicle the creation of this game. You can find the link to that below. I have to say, it’s pretty fascinating reading.

After some back and forth emails with the game creator and learning more about the game, I have to say I genuinely feel invested in Dizzy Dragon. It’s new, original, different and not perfect. Dizzy Dragon has a ton of potential and is still fun and challenging as is now. Knowing there is continuing developer support and more levels are coming soon definitely make this game worth a download.

I think this can be the next big thing for the iOS app store. 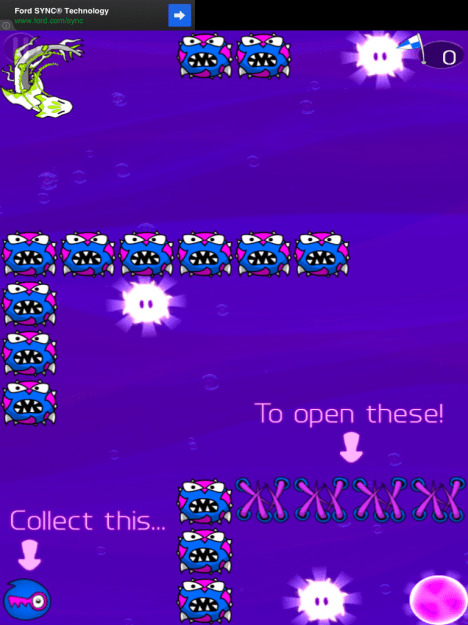 The control mechanic takes some getting used to and isn’t for everyone. Once you get it down you still need to pay attention. It’s all about paying attention to your dragon’s constant rotation, getting your tap timing right and being aware of the environmental hazards and puzzles. You don’t play this while watching TV or having a conversation. You sit down, focus and play. 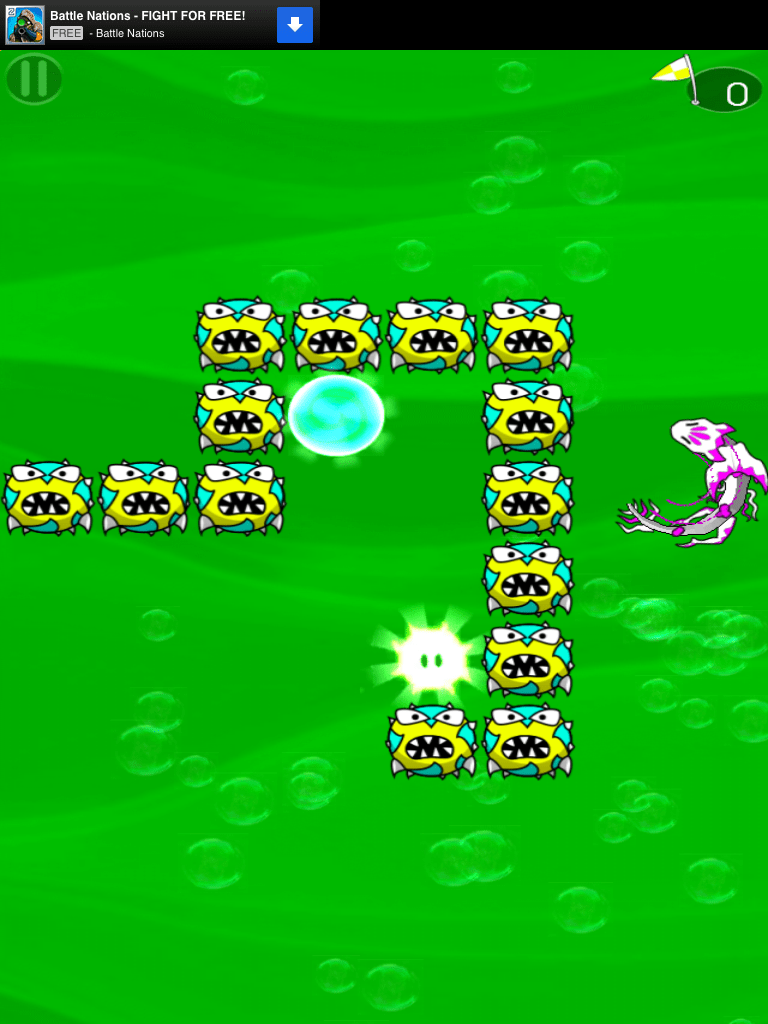 It’s free! It’s also pretty cute, very challenging and addictive. I haven’t been this frustrated by a relatively simple looking game since Cut The Rope. At times it seems impossible, but it’s not.  Put it down for a minute, walk away, and come back and focus. It’s doable and after beating those levels you thought were impossible that feeling of accomplishment is there. The character design for the dragon is cool, the music is nice and the fact that everything randomly changes color is a nice touch.

It has in app purchases but you don’t need them to play the game. In fact if you are really want a hardcore challenging game I say just avoid the downloadable Checkpoints all together. Knowing you could lose all your progress in a level with a single bad tap definitely adds a huge amount of tension.

This is a Freemium game and with it come some of the classic annoyances. Pop ups, thankfully between levels aren’t obtrusive. The ad that’s gotten on my nerves is directly over the pause button. Sometimes when going to pause it you will hit it and be taken out of the game to the app store for some other game. It’s pretty annoying.  Thankfully the developer has given you the option of buying out of the ads for .99 cents. I don’t mind the buyout of ads option in Freemium games. It feels like a trial run to me.  If you like it enough and think it’s worth it, buyout the ads and help the developer out a bit.  Honestly I’m going to do that with my game. I believe this game is worth paying .99 cents to enjoy ad free.

My biggest issue with the game is the “Checkpoints” feature and how it’s implemented. When you start the game you are given 7 in total for the entire game. As of now you aren’t given a clear explanation of what they are. When I tried using as I was told to do through the in-game instructions I didn’t get what I was doing. Add to the lag that started to happen and I didn’t know if things were registering. So I kept tapping my screen waiting for some sort of action from my dragon and in a bit I was prompted to buy more checkpoints…Wha? If you click yes, you are taken to the store menu where theses mysterious checkpoints are for sale. The store was very laggy and didn’t explain what these Checkpoints were or why I needed them. I had to force quit the program to get out of it.  I emailed the game creator, Martin Nanni, and he explained the function of Checkpoints in Dizzy Dragon. Below is an excerpt from the email response from him that I feel explains it better than I could:

“In answer to your question, checkpoints are just something we added to make the game a little easier. When you set one, it’s almost like saving your progress in a level. If you die after setting one, instead of going back to the beginning, you go back there, without losing your stars or keys. You don’t really NEED to use them but they help. “

After learning about what they do I think Checkpoints are an awesome feature to have in this game. There are plenty of times you are going to want to use something like this. This game is HARD. Checkpoints makes sense.  Martin has a assured me in our email exchanges that they are working on a better explanation of checkpoints in the upcoming update. When that happens I will update this review accordingly.

Personally I feel that seven free Checkpoints for 5 worlds with 20 level each, and a 6th world coming soon is a bit cheap. Maybe 7 free per world would initially would be a better option.

I think the best option would be making the ad buyout even more enticing with another two tiers:

The game also suffers from lagging when the music changes. 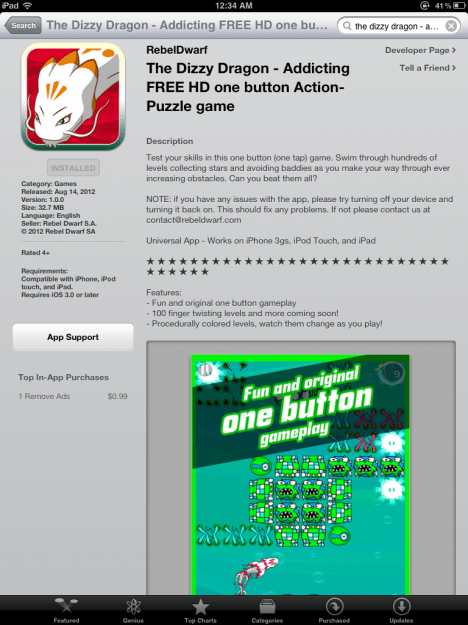 No mention of the Checkpoint In app Purchases. 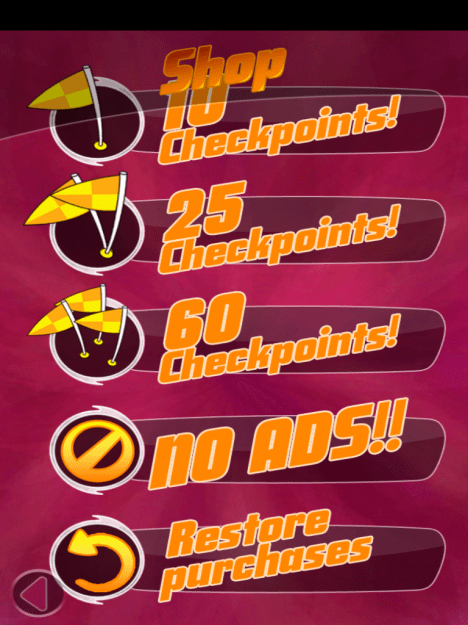 What you can buy. 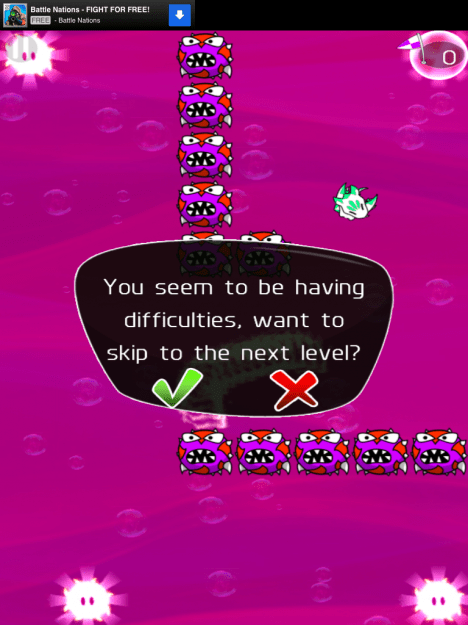