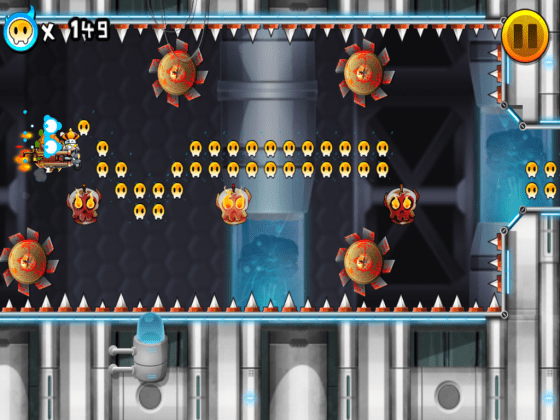 The controls make this harder than it has to be.

Hell Yeah! is a universal app for iOS 4.3 or later.  I haven’t had any issues playing this on my iPad 2, but it seems there are some issues with device compatibility on the review portion of the app store.  There is a lot that goes on here so as usual I recommend playing on the bigger screen of the iPad.

Hell Yeah! is a side scrolling shooter that puts you in the role of the Prince of Hell (who just happens to be a bunny) out to take down a bunch of random baddies.  Honestly, the story is pretty nonexistent.  The gameplay isn’t very good and the levels, while interesting at times, can just be maddeningly frustrating because of the poor controls.  The “Boss Fights” are pretty boring and leave you asking “Is that is?” There is a small feeling of progression as you level up your gun so you can kill faster and open up more paths in certain levels.  But really, these are just obstacles that are placed in a way that feel forced. 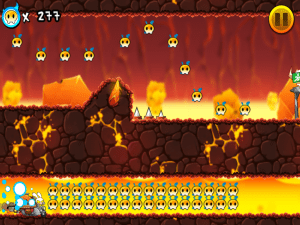 Not very well.  The controls for Hell Yeah! are simple, but unfortunately not very precise. You tap the left side of the screen for a jump and keep tapping it to fly.  Tap the right side to fire.  After you level up enough you can just keep your right thumb on the right side because the auto fire will be fast enough to kill most of anything.  Unfortunately, the jump/ fly mechanic is really fickle.  Sometimes it works smoothly; often times it’s just not precise enough to get the job done without heaping spoonfuls of luck.  Because of that the game is way more frustrating than it needs to be.

The graphics are okay and the music soon feels like an endless loop of the same track.  You will soon grow to hate the announcer saying “Ash to the Rescue” every time you start a level up.

The last level gets ridiculously hard. You face new enemies that shoot in multiple directions and the paths you have to take get narrower.  The same can be said for the last boss fight who isn’t that hard once you figure out where to doge his attacks, but the level itself is the hard/cheap part.  Unfortunately there isn’t really an ending that makes it all worthwhile.

They are promising updates to the game with more content, but as of right now it’s just meh.  The cosmetic changes you can buy in the in game store don’t really add much to the game for me.  The weapon upgrades are flat out mandatory if you want to get far in the game.  As can be expected they get very expensive very fast so expect to gold grind a lot to be able to beat the game. This is part of the annoying downside that irks you.

It’s an interesting shoot em up, that has sorta cute graphics and needless toon violence when you kill a boss for the third time.  The music is interesting and it shows potential.  With better controls this could be a much better game.  A better final boss and an actual ending would be great.

This game needs new jump/ flight controls yesterday.  For a paid app the need to grind seems obscenely inappropriate.  At least the grinding in Sela had fun comic panels making fun of its insanity.  Here it’s just there, smacking you in the face that you can also buy coins for more money…  Thats not cool. I paid for this app Sega, why are you treating me like I didn’t?

How to gold farm in Hell Yeah! Pocket Inferno:

Grinding for gold is pretty much mandatory in Hell Yeah!  The best place I found was in world 1 level 5.  You can easily make around 315 gold each run with minimal problems in a very short amount of time.  About a half hour to an hour of grinding should take care of you for the rest of the boring game. 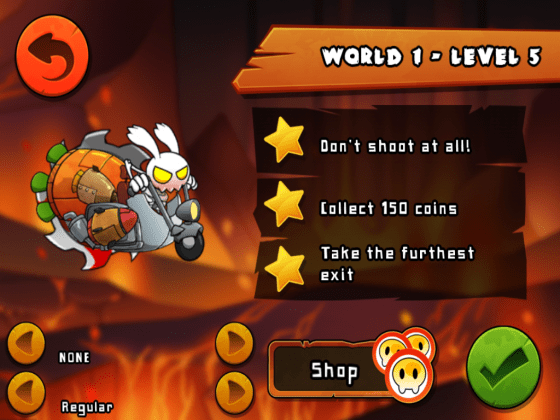 Where to get gold in Hell Yeah!