In Time: What’s Hot at Redbox 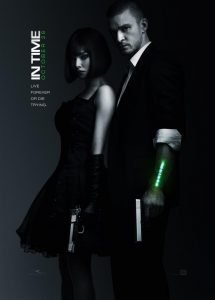 If you’ve doubted Justin Timberlake’s acting chops, this movie will definitely get you to forget that he was ever part of that boyband…what was the name again? “In Time” is a fun action movie that seems to echo the Occupy Wall Street movement.

Time is a precious commodity in Will Salas (Timberlake)’s future. So precious in fact, that time has become the new currency. In this dystopian future, everyone ages up until they are 25. Once they hit 25 they stop aging, however their watch on their armband begins counting down a year from that day. If they cannot somehow replenish their time, they die when the clock runs out. Salas lives in a time zone where almost everyone literally lives day-to-day, working to extend their life for an extra day or two. Prices in the “ghetto” are continually rising and people are timing out on the streets. Then, one night, Salas’ whole life changes after he meets the man from New Greenwich, Henry Hamilton (Matt Bomer) who has over a century worth of time to live. After saving Hamilton’s life, Salas learns that the rich are intentionally raising prices to keep down the poor and extend their own lives in order to achieve immortality. Hamilton himself wishes to die as he feels that he has never really lived his life and the cost at which he has earned his immortality has made him feel guilty. The following day before Salas wakes up Hamilton gives all but about 5 minutes to Salas and encourages him to not waste his time. After his mother (Olivia Wilde) dies on her 50th birthday, Salas decides to bring the people on top down by taking back all the stolen time from the people in the ghetto. Along the way he meets Sylvia Weis (Amanda Seyfried), daughter of a wealthy, influential time loaner and the eventually team up to equally distribute time while also avoiding the timekeeper Raymond Leon (Cillian Murphy).

So, ok the idea isn’t the most original. We have hints of things like Logan’s Run, where no one lives past a certain age, car chase scenes that evoke memories of The French Connection, giving  and Salas and Weis’ relationship hearkens back to Bonnie and Clyde with tinges of Robin Hood. Somehow, even while knowing that this dystopian future is not necessarily original, it works. There’s a believability about Timberlake’s acting that makes you overlook some of the not so great parts. There are several inconsistencies, however, mostly with the time funnily enough. The main characters seem to cut it close very often. In the beginning it’s understandable because Salas got most of his taken away and Weisz got hers stolen from the minutemen. Ok. But almost every other time, they only have something like a couple seconds left on their clock yet they are able to survive despite their actions actually taking longer on-screen. Another issue is a bit of a spoiler, but if they were able to steal so much time, why only take a day or so? Why not take a year or a decade? I guess that would take away from the climactic ending, but come on. If they have this idea of sticking it to the man, surely they could think “Hey, why worry about running out of time soon? Why not just take a couple years to be safe?” Also, the whole logistics of giving other people time seems strange, all you do is hold hands and somehow the time is transferred? I’m guessing there’s some kind of implant or microchip or something that holds the data, but nothing is really ever explained. All the references to time as money also get a bit old as the movie goes on. Yes, we get it, time is currency. There’s also the heavy-handed theme of the rich keeping the poor down, for a few to be immortal many must die, the time the wealthy have is stolen, the mass difference between the haves and have-nots, etc. But how do Salas and Weis’ actions actually make any difference? Like Weis’ father said at the end, sure they may be able to disrupt the system for a couple generations, but at the end of the day, the rich will still be making money. Heck after all the time the people in the ghetto got, you don’t think they’d be wasting it on unnecessary purchases putting it right back into the hands of the people they stole it from in the first place? And with all that time, who is going to actually be working in the factories or doing the menial jobs now that everyone is “rich”? Was the plan to permanently abolish this time-currency system? If so how?

Despite these questions, if you don’t think too hard, the movie is still fun and the action, though it mainly focuses on Salas and Weisz running around, is still enjoyable. The idea that time is the new currency does not really seem that far-fetched after all, who doesn’t want to be immortal. While there might have been some moments that took me out of the movie, overall, I enjoyed. As long as you just sit back, relax and enjoy the excellent cinematography and pretty people on the screen, you are more than willing to suspend your disbelief.