I’ve always loved knowing what makes people tick, which is why I enjoy conducting interviews. I want to come up with questions that will make the person think and, hopefully, provide insight to the audience. In our latest interesting interview, we had the pleasure to get in contact with S.G. Browne, author of Fated, Breathers and his latest book I Saw Zombies Eating Santa Claus. We appreciate the time that he took out of his day to answer these questions and hope that you enjoy learning a bit more about this amazing author. 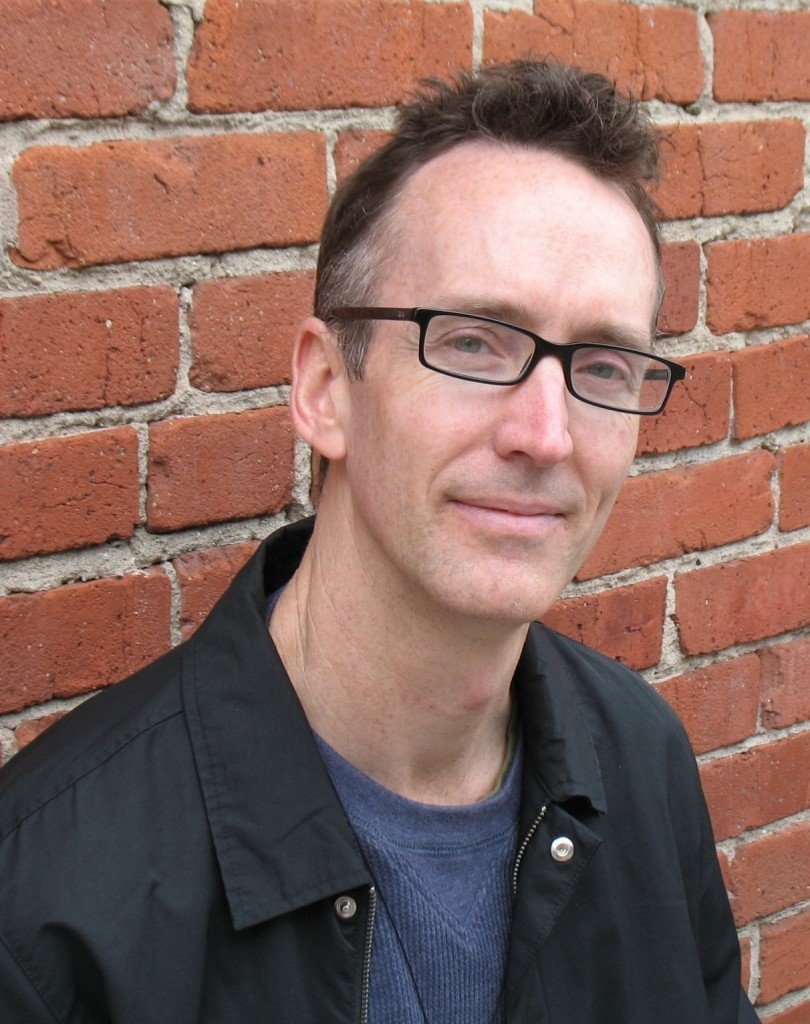 What inspires you to write?

Good writing. Good books. Movies, music, art. I can listen to The Beatles or Green Day, see a Van Gogh or a Hopper exhibit, or watch a film by Wes Anderson or the Coen Brothers and find myself wanting to create something to match the experience. And I love finishing a book that makes me think: “I wish I’d written that.”

What is your creative process?

When I’m working on a project I tend to write 4-6 hours a day. Any more than that and my brain implodes. But I’ll stay pretty disciplined and more often than not write six days a week until I get the first draft finished up. And when I’m working on edits with my editor, I pretty much drop everything to get the pages back to him before deadline. When I’m not working on a project, I’m about as disciplined as a five-year-old boy left alone with a gallon of ice cream and the TV remote control.

When did you decide that you wanted to become a writer?

I didn’t read much as a kid and didn’t really get into reading until the summer before my sophomore year in college. So one day while in the middle of reading The Talisman by Stephen King and Peter Straub, I found myself so caught up in the adventure taking place on the pages that the world outside of the book ceased to exist. And I thought: “I want to make people feel this way.”

How did you feel when you received your first rejection letter?

Oddly enough, it was kind of exhilarating. Just having someone respond to a short story I’d submitted made me feel like I was part of the world of professional writing. That feeling lasting until about my third rejection letter.

What gave you the idea to write Fated? 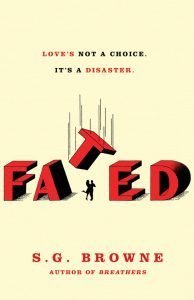 I was sitting on a bench in a shopping mall, watching people walk back and forth and wondering who they were and what they would be doing in twenty years. So I wrote this short little scene about a person who is watching people in a shopping mall, except he knows what they’re going to be doing in twenty years because he’s Fate. That scene sat in my journal for about a year and a half until I went back to it and it eventually became the rough draft of the first chapter of Fated.

Fate’s viewpoint changes towards the end of the book for obvious reasons. How was it writing Fate in the beginning of the book as opposed to the end? Did you feel a bit bad for your character after the low that he hit?

In the beginning he’s basically a disgruntled government worker, with no chance for advancement and unable to quit. So he’s snarky and jaded and had an attitude that was a lot of fun to write. As the story developed and Fate started to change his worldview, he became less self-focused and that opened him up, made him a little more rounded, so it was fun in a different way. And yeah, I felt bad for him but it was good to be in that moment with him, watching him deal with the consequences of his actions. A few of the chapters at the end are some of my favorite chapters in the book.

Who is your favorite character in the book and why?

Fate (aka Fabio) is the obvious choice. He’s sarcastic and has a good sense of humor and goes through a big transformation, in more ways than one. And it’s tough not to connect with your main protagonist when you’re writing first-person POV. But if I had to pick another character, I’d say Destiny. She was a complex character who was a lot of fun to get to know.

Why did you decide on presenting the novel as personal journey story as well as a love story?

I didn’t decide on anything. I don’t plot out my stories but discover them as I write them, so the direction the novel took wasn’t so much a decision as the natural direction the story wanted to go based on what my characters wanted to do. The plot evolves out of my characters actions rather than the other way around. So I just started writing and the personal journey and love story happened.

Some of the character’s have quirks that match their profession (Secrecy is paranoid, Sloth is a narcoleptic, etc), while others don’t necessarily fit (Destiny is a nymphomaniac). What made you choose these specific traits?

Most of them just sort of popped into my head without much thought, though originally Gluttony was co-dependent. When Love showed up later on, I realized she should be co-dependent and I ended up making Gluttony lactose intolerant, which I thought made more sense. But it was fun giving each of them some a human flaw or phobia or idiosyncrasy, which was done on purpose to show how much these immortal entities were similar to humans and had been around us for so long that we’d rubbed off on them.

The book starts out light-hearted enough but towards the end really shows the life of Fate spiraling out of control in a pretty dark way. Was this planned or did the story write itself?

This goes back to my answer about writing the story as a personal journey and love story. I don’t know how my books are going to end when I sit down to write them, so I had no idea where the story was going. But I’m a fan of dark comedy and my stories inevitably gravitate in that direction. I did have another ending floating around in my head that wasn’t quite as dark, but it didn’t ring true to the story that came before it and was ultimately unsatisfying, so I kept writing until I found an ending I was much happier with.

I don’t want to give away the ending of the story, but how much of Fate’s thoughts in the beginning and end of the story do you agree with? On the same topic, do you believe that humanity as a whole deserved the big event?

I think the best answer is one I’ve borrowed from some anonymous source, which is: I am in all of my characters but none of my characters are me. So it’s a bit of a blend. Some of what Fate believes resonates with me—specifically that in our culture, the western culture, we think we’ll be happier with all of these things society tells us we need. This car. Those shoes. That couch. But in the end we’re looking for happiness externally when we should be searching for happiness within ourselves. As for the big event, yes, I think humanity could use remedial classes.

A lot of your books have plenty of social commentary in them. How do you prevent yourself from being too heavy-handed with the commentary without losing the message in your humor?

Well it’s good to know it’s not too heavy-handed. I think it helps that with the novels I’ve written I didn’t have any specific social commentary in mind when I sat down to write them. Much like the way the plot develops out of my characters’ actions, the social commentary develops out of the plot. So I focus on the humor first. I didn’t know Fated was going to be an indictment of the consumer culture, but it turned out to be fitting that the novel opened up in a shopping mall. A lot of the commentary in that opening chapter was added once I realized where the book was going.

Which one of your books was your favorite to write?
While I’m reluctant to name favorites, since my books all bring something unique to the table, I have to say that Fated is my favorite book I’ve written so far.

Breathers was your first published novel. What interested you in the zombie subculture and delving into the idea of zombie rights and love? 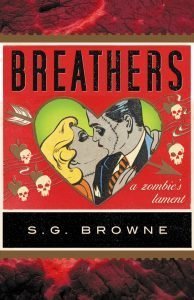 My roots are in the fantastic and the supernatural. I loved watching horror and sci-fi movies when I was a kid and Stephen King is the reason I wanted to become a writer. So back in 2001, after having written three supernatural horror novels and about four dozen short stories over the previous decade, I sat down to write a short story about zombies but nothing really clicked. Then I thought: “What if instead of running from the zombies, I was the zombie? And instead of being a stereotypical Hollywood zombie, moaning and shuffling along and craving human flesh, I was instead just a reanimated corpse who was gradually decomposing, didn’t have any rights, and needed some serious therapy. How would society treat me? What would my parents think? Could I join a bowling league?” And from that I wrote a 2000-word short story titled “A Zombie’s Lament.” A couple of years later, I was inspired to take that short story and expand it into a novel and discovered I enjoyed writing dark comedy and social satire more than straight supernatural horror. But an element of the supernatural or the fantastic remains.

And while I didn’t have any intention of writing a sequel to Breathers, a confluence of events led to my recently released Christmas novella, I Saw Zombies Eating Santa Claus, which picks up a year after the end of Breathers. While there are some to-be-expected zombie shenanigans, don’t let the title fool you. Santa Claus doesn’t really get eaten. It’s more like Miracle on 34thStreet, only with reanimated corpses. 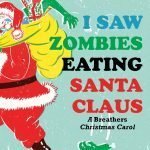 Again we want to thank S.G. Browne for taking time out to answer our questions. You can check out his website at sgbrowne.com for the latest news. Check out his most recent book I Saw Zombies Eating Santa Claus.