I never imagined that people would actually take the time out of their day to answer questions for such a small website. I guess that any publicity is good publicity. While my site may be gone, I still have a lot of the interviews that were on the site. I really loved all of the answers that I received and believe that even though my old site is gone, the interviews should live on. I hope you enjoy reading the answers to these interesting interviews as much as I did! 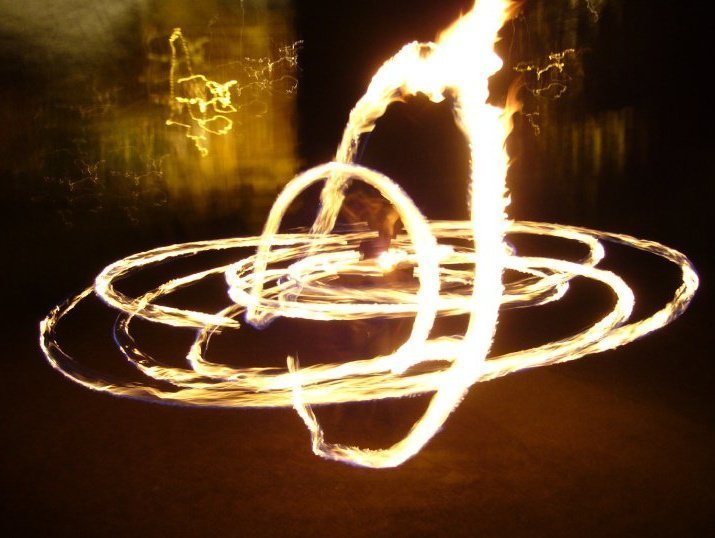 She’s a scenic designer, model, aerialist, and fire dancer. Yeah, you could say Julia Desiree is somewhat of a multi-talented marvel. We could spend several hours talking about everything this young, adventurous woman has achieved but for now, let’s jump into the fire (so to speak).

Combining her beauty, grace, and “extra” fine-motor skills, Julia tames the flame in the mesmerizing art of fire dancing. But don’t let her golden strands, and big ice-blue eyes, deceive you: when it comes to performing with fire, Julia is well-aware of the dangers and how ugly things could get if she doesn’t rely on her physical training and mental preparation. Always in pursuit of new ways to express and challenge herself, Julia became inevitably drawn to the art of fire performance.

Pieces was able to have the honor of interviewing Julia  and get the inside scoop on what inspires her and what her nifty, fiery “toys” are made of . The limber dancer also talks the mental and physical challenges she faces every time she does her devilish dance.

What motivated you to pursue fire dancing?

Fire Dancing appealed to me when I first saw it because, at the base level, every eye will turn when someone has fire in their hands. It need only be a candle, and an entire audience will be entranced by the light. I wanted that light, to manipulate it, and have that control over the audience’s attention. The movement in fire dancing is beautiful; the art form is, at it’s core, very dangerous.

How long did it take you to become comfortable enough with fire performance before you could perform in public?

My virgin burn (the first time you spin your instrument lit) was done at a fire performance retreat called WildFire in front of nearly 300 fire performers. I’m not a particularly shy person, but there is a big difference between performing in front of people who are spinners and people who have never seen fire performance before. There’s a lot you can get away with when the people watching don’t quite know how difficult some tricks are compared to some that are simple and showy.

Tell me about the “instruments” poi, darts, fans you use in your dancing. What are they made of and how integral are they to your performance? 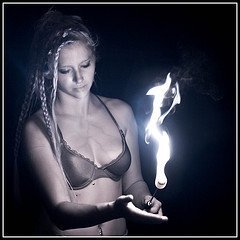 My fire tools enable me to perform…period. Without at least a torch, there is no way to manipulate fire. The various instruments I use determine the way I move to create entirely unique effects. Poi are two wicks of various design on the ends of chains no longer than an arm. The versatility of the chains and the fact that there are two objects to concern yourself with make this tool a favorite among very technically proficient spinners. Poi is also a very good tool to start out with since it will help you develop independence of movement in your hands and body.

Rope dart is a modified martial arts weapon that consists of a wick on the end of a long rope (generally around 15’ long, though sizes vary greatly). The rope dart is an extremely unique tool since it’s movement is entirely dictated by the performer’s body. A series of casts and empty knots create the idea that a single point of light is orbiting and bending around the performer’s body.

My fire fans are the newest of my tools and are fairly self-explanatory. The fire fans I use do not collapse, and have a ring at the bottom so that they may be spun. This turns the tool into a prop that can easily be spun with serious potential for complex tricks.

Finally, my torches are used for my fire eating and contact fire (also known as fleshing) routines. They are small wicked torches that can fairly easily fit in my mouth so the flame can be extinguished, or vapors captured to be released in plumes of flame. These are also used to create a fuel transfer on my skin, essentially setting the fuel on my skin on fire, in a brief and safe manner so I am not actually burned.

How do you prepare for a fire performance both mentally and physically?

A lot of logistics go into fire performance. Knowing where your toys are and how you’re going to refuel and where your safeties are can reduce the stress and anxiety by a lot. Stretching out is just always a good idea, especially because spinning can be hard on wrists and shoulders, arms and thighs. Mentally, creating a character for your performance can help. Why are you manipulating this fire? Is it pure sex, or impish delight? Perhaps ethereal fire spirit or slapstick clown? All of these can affect your performance and how you connect with your audience.

Have you ever had any accidents/injuries or know of anyone who has from fire dancing?

Yes! I do have scars from fleshing and fans from second degree burns. First degree burns are pretty routine from any of my toys. I have seen third degree happen during a fire performance, and trades like fire breathing and especially fire eating have the threat of death. Inhalation of flame can cause your lungs to fill with fluid and/or collapse, though I don’t personally know anyone who has died from it. I do know breathers who have had second degree up their neck and lower face from a back wind.

What do your friends and family have to say about what you do?

My family can’t quite get past how awesome it looks to get to the “it could kill me” part, and I think that speaks well of how they view my competence. I choose to believe that it means they have a fair amount of confidence in my abilities. That and I’m not terribly explicit about the negative effects to your body.

Any advice for would-be fire dancers?

Having conquered fire, Julia is currently training on the aerial arts, with sure hopes to become the Queen of the Sky.