Welcome to Nardio Interesting Interview!  Pretty often I find myself wanting to know more, about everything, I’m an asker.  Thankfully after sending out tons of interview requests we started to get back some responses.  Our new Interesting Interview comes from the fine folk who brought us the amazing Subway Surfers!  If you haven’t already go buy it.  If you’re nervous read our review first, then go buy it!

Jeppe can you please tell us a little about yourself?

Jeppe Bisbjerg: Sure thing, I joined Kiloo Games in early 2009 after working mostly in the movies industry. Since then I’ve been producing all of Kiloo Games’ top flight games such as, the Frisbee® Forever series, Bullet Time HD, Zoonies – Escape From Makatu and of course Subway Surfers.

Can you tell us a little more about your company?

Jeppe Bisbjerg: Our CEO Jacob Moller founded Kiloo Games back in 2000, working out of his own small one-room apartment, since then the company has grown steadily through the years, expanding from 2 employees in the early beginning to +35 in our brand new offices. We’ve specialized in creating fun, diverse and first class games for all ages on iOS and various other platforms.

How many people did it take to create Subway Surfers?

Jeppe Bisbjerg: Well, it has varied a great deal, but when the team was at its largest more than 10 people was involved in the development.

You made the game along with the team from Sybo games, who handled what?

How did the idea of Subway Surfers come about?

Jeppe Bisbjerg: Originally Sybo Games had created a short award winning fiction film about a spray painting kid chased by a guard. We loved the style of the universe, the humor, so we pitched the main gameplay to the small team at Sybo. Pretty soon we had a working prototype and the rest is history.

How long did it take to create Subway Surfers?

Jeppe Bisbjerg: The prototype was created in early January and we launched in May, so five to six months all in all.

What games and movies helped inspire you to create the world of Subway Surfers?

Jeppe Bisbjerg: Well of course we are tremendous fans of the runner genre on iOS and with browser-based games: Canabalt, Jetpack Joyride, Temple Run etc. but the entire style is very much centered around classic Saturday morning cartoons with bright, vivid colors and a good dose of humor. There’s also a classic Tom and Jerry feel present in the game.

As a company that makes App games can you tell us some of the challenges you might face as opposed to more traditional console/ PC gaming company?

Jeppe Bisbjerg: It certainly is a completely different experience you are designing in comparison to traditional platforms. You have to think about the smaller screen of the iPod’s as well as the large resolution of the iPad 3, you have to create something that works for a quick two minutes while the player is waiting for the bus, but it also needs to have meaningful cohesion for multiple play sessions. Delivering a fun experience is always the challenge, no matter the platform.

How does it feel to make hit games?

Jeppe Bisbjerg: It’s an unbelievable feeling and a great thrill to see the millions of fans playing the game. With more than 20 million downloads around the world that’s more than four times the complete amount of people in Denmark, where Kiloo is located.

Why did you decide to keep the game light hearted?

Jeppe Bisbjerg: Well, we had just finished creating a very dark, ominous story driven experience with Bullet Time HD (iOS) and wanted to create something immediate, fun and charming. Subway Surfers was perfect in that regard. 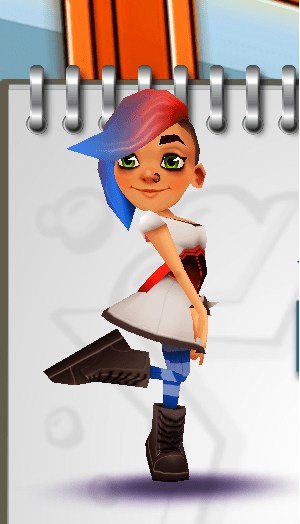 How did the idea of different characters come about?

Jeppe Bisbjerg: We certainly wanted a group of kids teasing the grumpy guard and his dog, so that there was something unique for everyone. We know now that each player has their own favorite player and we take great pride in creating likeable characters with a twist.

What else does the staff play/ do for fun when not making a hit game?

Jeppe Bisbjerg: We love to play old-school board games, watch bad Hollywood movies or just hang around the office. There’s an amazing inspirational working environment and a great bunch of people here at Kiloo Games.

At what point did you feel the game was ready to be sold?

Jeppe Bisbjerg: Play-testing the game continuously through the entire production process I always sensed that there was just something about this world and the intuitive gameplay. No matter the bugs we encountered along the way, it was always great fun to go for another run. The game was ready quite early, but all the little details came from iterating and striving to do better, so we didn’t ship the product until we were 100% satisfied with the end result.

Are you working on a sequel to Subway Surfers?

Jeppe Bisbjerg: I can’t comment on that at the moment unfortunately, but we are launching Subway Surfers on Android within the next couple of weeks so stay tuned for more information.

Jeppe Bisbjerg: I’d just like to say that we love all the suggestions we keep getting from our gaming community. We listen to the feedback and try to make the game better, so you can expect a lot of improvements and updates in 2012 and beyond. As a sneak preview I will say that the brand new update will feature a great selection of awesome-looking characters!

Anything new we can be expecting from Kiloo Games?

Jeppe Bisbjerg: Sure thing! We’ve got four new titles in the works for 2013 and as I mentioned we can’t wait to show all the improvements we are planning for Subway Surfers.

Jeppe thanks again for taking the time to do this interview. We here at Nardio wish you and your team the best of luck with all your endeavors. Look for more great games from Kiloo Games here.