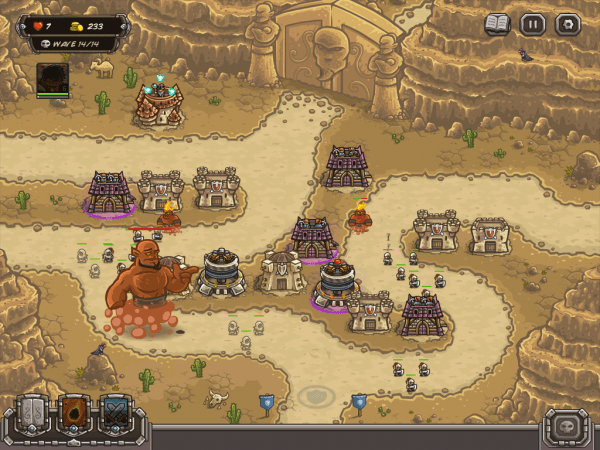 Your wish for a new Kingdom Rush has been granted

If you are a fan of the original Kingdom Rush this should be a no brainer. In case you think some of the other reviews cant possible be true, I’ll be another voice to add in: Kingdom Rush Frontiers is an amazing sequel to the best tower defense game of our generation. 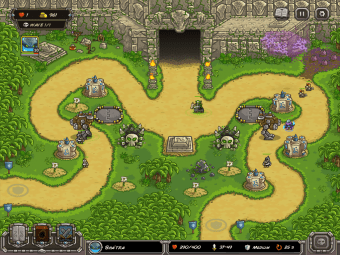 I just abducted my way to a win!

The game boasts three difficulty settings, challenge and heroic modes and three different free heroes to play with. You definitely won’t run out of things to do. With the Star scoring system in place, you will find yourself playing and replaying this nonstop to collect all of the stars to max out your abilities.  There is replay value here, there is challenge and an insane amount of depth. This is another amazing tower defense game. It’s different enough to be a justifiable sequel yet familiar enough to elicit quiet focused smiles on those who were addicted to the original game.

Are there in-app purchases? Yes. And some scary big ones. You never ever need them. The three Heroes you start with are awesome. I’ll be doing individual reviews on each hero soon. With that being said, even if I wasn’t reviewing the game for Nardio, I still would have supported my favorite tower defense developer with the in app purchases.  Not just because I am thankful (although that’s definitely a part of it), but because I will play this game nonstop for years.

Perfectly. Your heroes go where you want, when you want.  The game runs with no lag and the music is just as amazing as the original. The art as always, is just awesome. Every tower has little touches that just make them pop. The attack animations bring even more life to the game. 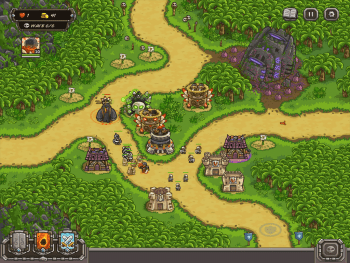 I have to admit the first time I summoned a Battle-Mecha T200 I gasped at how cool and cute it was.  The assassins guild is my preferred army unit. It just seems to totally outshine the Knights Templar. The Knights are costly, and just never seem as effective as their counterparts. However, the Assassins ability to kill fast, dodge and pick pocket gold from enemies is just too useful to not use every single time.

My only issue with the artillery towers is the DWAARP never seems to justify the cost. Sure it does some good area of effect damage, but the Furnace Blast doesn’t happen often enough to be a reliable unit. Meanwhile Battle-Mecha T200’s ability to leak lubricant is an amazingly useful crowd control ability.

As far as the Magical towers go, I tend to go with the Necromancer tower over the Archmage tower for its increased attack speed and better crowd control. The archery towers, while slightly underpowered in my opinion, seem pretty balanced. 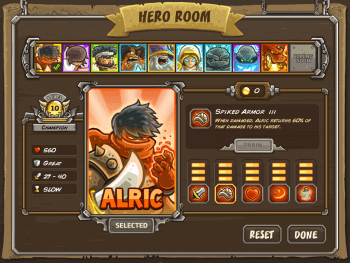 As far as the heroes go they are all pretty interesting to control. They seem very similar in some respects, but they’re different enough to warrant multiple play throughs with each one.  I especially like the new permanent leveling and upgrade system in place. Before a common complaint with fans was that it was annoying to play through stages only to have your hero feel badass right when the level was just about finished. Now, characters level up permanently.  This allows you to take powered up characters back to earlier levels and let them kick butt.

The hero upgrade system feels almost RPG like as you are able to pick, choose and reset the skill upgrade path you are about to take. Don’t worry though, by the time your hero reaches level ten you will have maxed everything out. I do wish there were more talents you can select at max level. I would love it if my heroes felt a tad more heroic. I’ve bought all of the heroes available for in app purchase and I have to say those are pretty fun.  Again you don’t need the buyable heroes to enjoy the game, but they are there and they are interesting.  Although I will say now that my favorite purchasable hero right now is Sha’tra.  I’ve seriously stopped playing to just watch him be awesome.

Kingdom Rush Frontiers in my opinion is a wonderful and worthwhile sequel to the original greatest tower defense game. I could have sped this review up for a fast review, but I just had to take my time with the game.  Sure it took me about two days to beat it. But replaying it, beating the challenges and replaying with different heroes is what makes this game shine. Once again you will find yourself endlessly replaying every level to try out new strategies, new ways to use utilize your heroes and new ways to just lose yourself in this great tower defense experience. 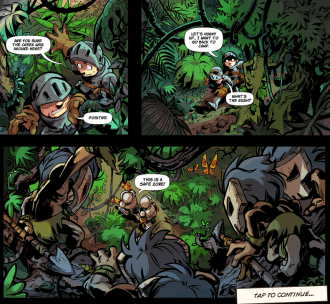 You will want more of the comics.

Kingdom Rush Frontiers is just a damn great tower defense game that offers tons of replay. Sure, right now the iPad version costs five dollars. But those five dollars are giving more replay value and substance than buying five of most other one dollar games.  The best part is that Iron Hide Games was awesome enough to update the heck out of the last Kingdom Rush with several more levels that really helped make the game last. I have the feeling, especially after seeing the ending, that this game is far from finished.  So as you spend your time playing and replaying this game, rest assured there is more free content on the way.

The levels are tough and very interesting. You won’t get bored playing though these for a long while. Right when you think you have a level down, here comes a giant with an axe breaking down a new path. I never needed to move my units around as much in the original game, but I found myself extra focused as I played.  You never just sit back and let your towers do all the work in this game.

I love that this time comic panels were included with the campaign.  It does help move the story along and really showcases the talent of the quirky artwork. I just wish there was a bit more of it in the game.

The three difficulties are a wonderful way to help get every type of gamer interested. For some easy might just be a good intro. Normal is surprisingly difficult and hard, well make sure you clear all your afternoon plans. In conjunction with the difficulty levels is the gem store. Here you can save up or buy gems that can help you get through those really hard stages and challenges. Also, they can be used just to screw around and have an almost sandbox like game if you have enough.  Starting a game with an extra few thousand gold gives a fun advantage to the game.  The various powerups you can buy really can be lifesavers for those less skilled players or a fun means of revenge for players wanting to decimate a level that gave them soo much grief before.

I have to mention all of the winks and nods to pop culture and Sci-Fi. I was just floored with the Star Wars Episode One nod in the first stage. The predator nods and achievement are just awesome. Little things like this had me admiring every stage instead of immediately jumping in to play. A few times I even let units pass me as I was busy discovering something else cool the developers just put in.

The last boss is just cheap.  It almost feels like you need to spend gems on extra gold for this fight. Even then, depending on your luck on what towers he takes away you may or may not make it out with three stars. Luck overtakes skill here, which in a game like this just doesn’t feel right. Especially galling is how he can one shot your heroes. They’re not safe, even at a distance sometimes. 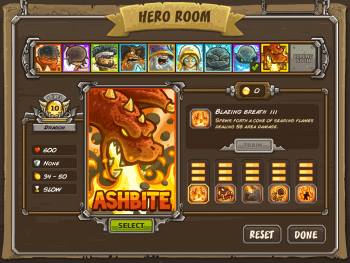 Not awesome enough for seven bucks.

I think the paid heroes just cost too much money. Yes I bought them, and yes they are interesting.  But as a fan who bought the original extra heroes for .99 cents each and all of the comics, I don’t like seeing the prices raised higher and higher. While I understand that developers need continuing revenue streams to support themselves, their work and their lives I feel like the five and seven dollar asking prices for the last two heroes was just too much. This is shown in the customer reviews in the app store. Yes we love your game Iron Hide and we want to support you, but these two heroes, as is now, just don’t feel heroic enough to justify the asking prices. Both just melt from ranged damage and Ashbite, in my opinion, feels inferior to Sha’Tra. For $7.00 I want my dragon hero to be pretty darned powerful, if not over powered. I’m talking not being smacked away by the bosses powerful. Or can’t stand up to a caster powerful, I mean I just paid seven dollars for a friggin dragon of doom powerful.  The worst part, Ashbite doesn’t even attack air units. He is a flying dragon for goodness sakes! 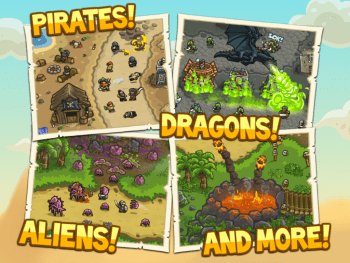 You get tons of value in Kingdom Rush Frontiers.

On the other hand you don’t need to buy the heroes the minute you buy the game. You never need the additional heroes to enjoy the game. You can save buying them for later on, one by one.  Maybe you get one a week. You can use them as ways to extend the gameplay once things grow stale with the roster you start off with. Again Iron Hide has filled Kingdom Rush Frontiers with tons of gameplay and replay. It’s almost a given that we are also going to be receiving new levels as the story continues. Sure when it’s all said and done with everything included the game costs half as much as a console game.  But Kingdom Rush Frontiers has more gameplay and replay than most games I get for my Xbox 360.  Long after I am done with Lollipop Chainsaw, Catherine and Halo 4 I will still be playing Kingdom Rush Frontiers. I understand to fund all that additional content, the quality and new games in the future I do need to pay.  Sure it seems like a lot.  Be we are getting even more in return.

I recommend supporting this developer with in app purchases.