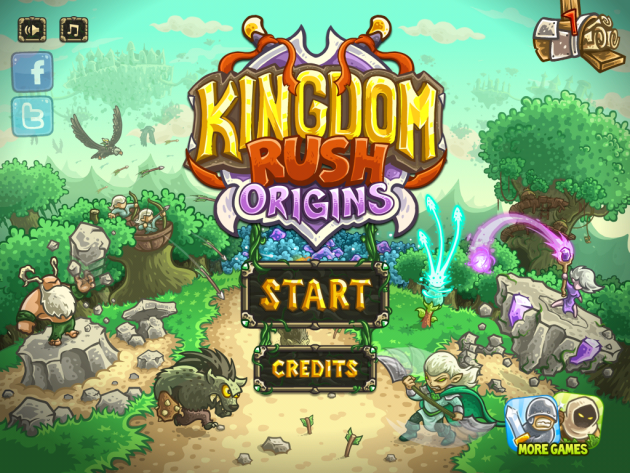 What should you play it on?

This review of Kingdom Rush Frontier is for both the iPad and the iPhone.  These are two separate apps and I have bought, played through and beat both. You get the same great experience with both. As always, I prefer gaming on my iPad as you get a better experience on a much larger screen.

If you are a fan of the original Kingdom Rush or the awesome follow up Kingdom Rush Frontiers, I’m sure you already bought this and beat it like 50 times by now.  But whatever. Kingdom Rush Origins the best game of the series and the best tower defense game yet.

The game has a perfectly tuned campaign mode with tough but never cheap waves of enemies to deal with, lots of levels to play and endless mode.  You wanna know why I’m insanely late to the review party? Endless mode. I asked for it last time and Ironhide Games has delivered.  Best of all, they added endless modes to the other Kingdom Rush games!  How awesome is that? Every single Kingdom Rush Game continues to get updates years after release.  This is a developer that you can feel good about supporting. Just in case you feel like supporting our favorite developer, there are a good amount of Heroes to buy.  This time around they feel pretty darned balanced.

I honestly have no problems with this game. You need Kingdom Rush Origins

I will be playing this game for years to come. Thank you for endless!

No I’m totally serious.  This is the best Kingdom Rush game yet.  Ironhide Studios perfected the formula and nailed it.  This is a gaming masterpiece.

There is no lag, gameplay is fast and smooth and you never seem to lose track of your units. The music is just as amazing as the original and its awesome sequel. The art, as always, is just awesome. Every tower has little touches that just make them pop. The attack animations bring even more life to the game. Sadly, I feel like the cool sound effects the towers used to be known for have been muted a bit.

The heroes and the upgrade system for them feel perfectly balanced. I would like it if my heroes could go past level 10 for the endless mode. But wishes are wishes… I need to hurry this review up so I can go back to playing the game.

The best tower defense series manages to outshine itself once again and prove you don’t need to spend time with any other tower defense game that isn’t made by Ironhide games.  This game is so perfect I almost feel bad for the other devs who make tower defense game. Almost.

Just get this game.

Because Ironhide just did everything right.
Smooth performance right out of the gate.  No bugs, or lag.  No greedy in app purchases.  Nothing to distract you at all from what is most important – the amazingly crafted game in your hands.

Short comics tell an interesting story while light hearted heroes bring it to life in engrossing, perfectly crafted gameplay. Once you max out your skills, Kingdom Rush Origins has almost endless replay value as you try new ways to beat once conquered levels.  Different difficulty options make the game even more fun or unforgiving.

Ironhide just did so much right with Kingdom Rush Origins that I am honestly floored.  Besides Nintendo, no other game company has consistently raised the bar while maintaining tight gameplay. Every hero you can select or buy is a viable option to rock out with for a full play through.  Levels are varied and splendidly done. Hidden touches and nods to sci-fi movies and World of Warcraft always bring a smile to my face.

Kingdom Rush Origins is just perfect. With the addition of endless mode and the constant addition of new heroes and levels I know I will play this game for years to come. Thank you Ironhide Studios for this amazing gaming experience.

This game is perfect. Seriously.  I have no problems with it besides the fact it has totally crippled my ability to play and review other games. I guess my only complaint is that I’m not employed by Ironhide games so I could have endless access to play these games and be paid for it. (Ironhide if you are looking to hire a tester!)

I recommend supporting this developer with in app purchases.