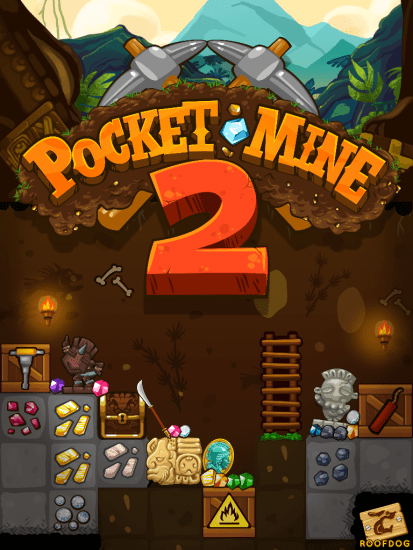 Is Pocket Mine 2 Worth Your Time?

What Should I Play Pocket Mine 2 On?

Pocket Mine 2 is available for both Android and iOS. I prefer playing on a larger screen.

If you enjoyed the first Pocket Mine then you won’t be disappointed with Pocket Mine 2. It’s the same great gameplay as the original with a new level based system, additional power ups and some slight changes. It’s ridiculously addictive. I’ve stayed up until 3am trying to beat the Olympus bonus level.

Pocket Mine 2 is an incredibly simple game. You try to get down to the goal depth by mining through dirt and stone. Luckily you also have a lot of fun power-up crates that can help you on your mining journey as well as cards to help boost the power of these power-ups or provide other abilities like detecting crates in a 4 block radius. There are different “worlds” to dig through and each world offers a different character that has a unique trait and 5 progressively deeper levels you need to defeat. While digging you can find treasure crates that contain artifacts which you can turn in for prizes like cards, keys and even the special currency of red gems. There are also chests you can open if you have enough keys. These provide either cards or different gear. The gear you receive range in usefulness from cosmetic only to providing power to particular weapons. You can create a customized character complete with pre-determined cards and outfit though each of them have a refresh time of 2 hours. Unfortunately, after you use them once, you cannot go back in to inspect their gear or cards and can only make changes to them after they have refreshed. 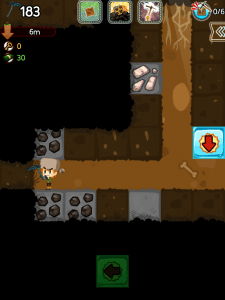 The gameplay is simple: you tap a block and the character will then hit it with its pick ax. Some blocks take one hit, others take four and still others cannot be destroyed at all without the use of a particular power-up. You continue tapping until you reach the stated goal. Each time you tap, your pick durability decreases. You’ll have to carefully maneuver your way around so your pick doesn’t break before you reach the goal. This is where strategy comes into play. You’ll want to avoid blocks that take multiple hits to destroy and use as many explosives as possible. Of course, sometimes avoiding the multi-hit blocks might cost you the same in durability if you had just hit it. You’ll need to balance the pros and cons of trying to avoid blocks in the span of a couple seconds. Luckily, you can see exactly how many taps you have left in the upper left corner. The game also keeps track of your depth in comparison to the goal, which is great for deciding if you want to continue after your pick has broken that first time. Only have 5 meters to go? Might as well spend that red gem for 10 more hits. After you complete a world you can then go back an replay it on endless mode for more money. And you will definitely need the money. You earn it by collecting coal, diamonds and other precious materials.

The bank block has made a return but this time it only takes one hit and the box disappears unlike in the first one where you had to hit it multiple times and then it’d leave behind an undestroyable block. You then use the money to upgrade your pick durability, combine duplicate cards for better effects or swap out your starting bonus cards before playing through a level. You’ll be surprised how quickly you can blow through 10,000 bucks. As mentioned before, there’s also a special unit of currency – red gems. You can randomly find these in treasure chests and you can occasionally create it if you have all the artifacts in a series. Of course, you can also purchase them for real money. So far, I haven’t run out of the ones I have earned through the game.

What I do run out of is energy. Yes, Pocket Mine 2 employs the dreaded energy system. Regardless of whether you make it to the bottom or not, you consume energy. You only have 5, though you do have the option to permanently increase it to 8. Generally, I’m against this kind of freemium aspect that limits gameplay, but I like Pocket Mine 2 so much I don’t mind supporting the developer by paying for the energy upgrade. And if I do run out, I can watch an ad for an additional energy. It doesn’t seem nearly as punishing as a lot of other games that employ the same system. 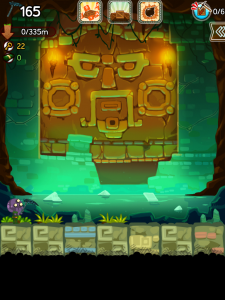 Pocket Mine 2 is just a great combination of upbeat chiptune music, cartoony characters, vibrant colors and really fun gameplay. It’s also a wonderful game for people who are addicted to progression based gameplay.  The more you play the stronger your pick gets and the farther you get.  The whole game is about grinding and upgrades with results you see very quickly. It’s really easy to just pick up and play for a minute and, as simple as it appears, it still requires some thought on your part. If you play the game enough, you’ll start to notice patterns in the repeated layers of each mine. You can use this knowledge to dig even deeper.

Roofdog Games added some nice little touches to the games like the small torch on the wall falling down when there’s an explosion near it. There’s also new characters you get to try out in the different worlds and can later unlock for your customized loadout by paying varying amounts of gems. Of course, the more useful they are, the more expensive they will be. But you’re never forced to make any purchases, which is one of the many reasons I love the game. While some levels certainly seem designed to make you spend at least one gem, you don’t have to. You can spend your time grinding for money and upgrading your pick until you can make it. Likewise, there are plenty of treasure chests you can open and you can go through keys really quickly. But you can earn said keys by completing side quests and you don’t need to open every single treasure chest. How much real money you choose to spend on the game is completely up to you but it seems like they are pushing more for in-app purchases than in the previous game. More on that in the No Like section.

It’s a great game but I noticed on my iPad 2 there was some lag during gameplay. It’s probably due to all of the explosions and new animations. While it hasn’t ruined my gameplay yet, it is noticeable. Also, when I’m loading the different levels, the screen goes black for a couple seconds. In the beginning I thought that the game crashed but it’s just loading time. Again, maybe it’s because I have an older iPad, but it definitely took about 2-3 seconds to load.

In terms of gameplay, I have a few issues. So far I haven’t found any health blocks or health cards that I loved so much in the original game. I’m not sure if they just got rid of it or I haven’t stumbled across them yet. I also am not a big fan of the exploding worm or lightning bolt. They move randomly and I prefer power-ups that I know will destroy blocks in a certain radius. As well, I feel like the grenades aren’t as useful as before as now they mainly explode in the air without destroying anything. This happened occasionally in the original game, but now I feel like it happens all the time. It’s unfortunate because they used to be one of my favorite power-ups in the original but now I mostly avoid them in favor of bombs and gas crates. The dynamite crates remain relatively useless as they only clear a single line. It would be great if -when you had the upgraded card – they would also clear out the row below (or at least some of it). 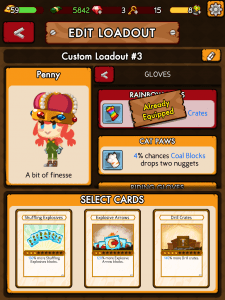 I also have issues with the closet system. For one, what is the point of cosmetic only items? They’re pretty much useless and take up scrolling space to find gear that is actually useful. You also can’t really organize these items at all so you end up having to scroll past the dozens of cosmetic items before you reach something that can actually help. Hopefully this will get streamlined in the future. The other issue I have is that there are multiple copies of the same item with seemingly randomized stat bonuses across the different rarities. It’s incredibly confusing. You can’t inspect the gear or cards on your character unless they are on cool down. It’s incredibly inconvenient and rips me out of the game. Sure, I get the logic behind it. Extra cool downs mean extra pay walls for a Freemium game, but the cool downs are just too long and it really takes away a lot of the fun in the game. The worst part is that you can’t equip the same cards and gear on different characters, something you could do in the original Pocket Mine. It was a great reason to buy into the additional slots simply to have the same awesome cards or at least one of the awesome cards. Now that the cards share the same cool down as the character there’s really no incentive to buy into the extra character slots. 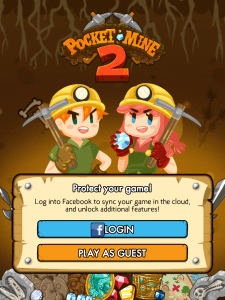 Oh and, according to Bernardo, don’t spend the gem on the bonus Crystal Level if it pops up. While it might say that all they have is crystals, apparently it isn’t all it’s cracked up to be. He made more money on a regular run armed with the crystal touch than he did in that mine. Also, I’m pretty sure the last level of Olympus is impossible to beat without spending gems. We spent 11 and finally beat it but now we can’t replay it in endless mode, which is too bad because we didn’t collect all the artifacts while we were there. You are still able to get those artifacts other places randomly, but it’s still annoying not to be able to farm them in a location where you would only get them.

Honestly, these features make it seem like Roogdog Games is sliding down the path of bad Freemium. Still, despite all of the negatives I listed, I freakin’ love this game. I’m actually playing it right now as I write this review. I get that it’s really hard to make money in the app stores and maybe the first game didn’t make as much money as they hoped. I don’t begrudge developers an income, but there is definitely a good and bad way to do IAPs and Roofdog is definitely close to stepping into bad IAP territory.