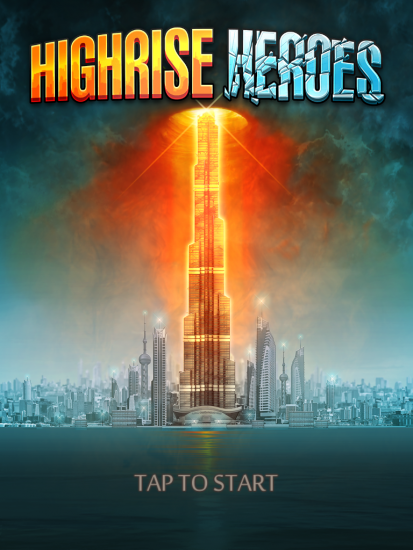 Is Highrise Heroes Worth Your Time?

Yes. Without a doubt.

What Should I Play Highrise Heroes On?

Highrise Heroes is available for both iOS and Android. As always I prefer playing on my iPad.

Highrise Heroes has you play as an amnesiac named Seb who must escape a crumbling building with several other employees who are also stuck inside. As you continue playing you start uncovering the mystery of the building and your own identity. The story definitely kept me interested but it was the gameplay that kept me coming back again and again. As a match three AND word search lover Highrise Heroes was able to combine these two genres into a well blended experience. 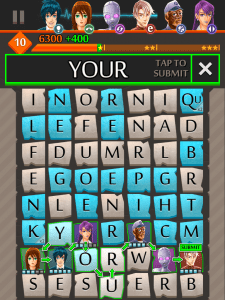 Highrise Heroes reminded me a bit of Letterquest. Instead of matching similar shapes to one another like other matching games, you instead have to match letters together to form words. You don’t need to match in a certain direction at all, which is part of the fun. All you need to do is string the letters together by dragging your finger over the letter and people tiles. Once you’ve made the letter you just need to tap on the last letter again and you’ve formed your word. Often you will need to combine certain tiles with people to refill their oxygen or form words to destroy certain obstacles. The longer the words the bigger your score. Words over 5 letters will also create a “bomb” of sorts and again, the longer the word the bigger area it affects. As you progress through the different floors you’ll run into different obstacles like letters encased in glass, unbreakable tiles, fire tiles and oxygen levels. You need to beat a level in a certain amount of time or moves in order to progress. Luckily, each member of your team has different powers to make your life a little easier. Some will refill the oxygen levels of a team mate, others will swap the location of letters and still others will destroy certain obstacles.

Of course, using these powers come at a cost – namely a certain amount of moves. So you will need to decide if you want to spend two moves and use a power or try to muddle through on your own strength. The best part is that you don’t ever NEED to use their powers. Sure, you might lost a round or five, but it’s not a huge deal. You might need to wait 20 minutes for your hearts to refill though. Yes, it is that kind of game, but no, it is never that bad. You have 5 tries to get through a level and you run out of attempts. Then you can either pay to refill your hearts or just wait it out. You can also watch a video for additional moves after you fail in case you don’t want to use up that heart just yet. You can also use gems if you’ve run out of videos to watch for the day. 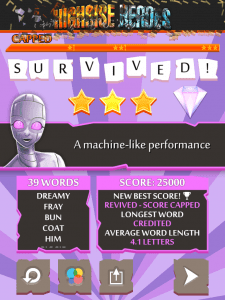 Watching ads to 3-star a level

Did I say gems? Yep. Don’t worry though, they’re never really forced on you as you never need them. You can earn them by completing levels and getting three stars on each of them as well as unlocking the next area. And speaking of, you’ll also need a certain amount of stars to unlock the next area, which consists of around 10 levels. Or you could just pay $1.99 to unlock them. Again, you don’t need to pay into the game, but there are options available if you just don’t want to spend the time to get more stars. It can be frustrating at times. Much like Candy Crush and other matching games you are at the mercy of luck. Sometimes you’ll have a great board with useful letters. Other times you’ll have a bunch of J, K, V and Zs with no vowels. Them’s the breaks. My advice if you can’t get past a level? Step away from the game for a couple days and then come back to it when you’re not as frustrated. You’ll probably three-star it in one go.

While it can be frustrating at times, I still really love this game. I feel like I’m not completely wasting brain cells – hey I’m forming words and even learned a couple new ones – and the in app purchases are never forced upon you. Add into that a fun story line and it’s one of the best word search/match games I’ve played. I really hope other companies use Highrise Heroes as an example and do more with this genre. Honestly, I’m really looking forward to a sequel, even if it’s more of a spiritual sequel considering the two different endings.

There’s still some amount of luck involved and it can be frustrating when there are literally no good words to make that will progress you through the board. Also, I got really tired of saving the little girl’s teddy bear or that woman’s china doll. I wish I had the option to yell at them, “THE BUILDING IS COLLAPSING FOR GOD’S SAKE. WE DON’T HAVE TIME TO GET YOUR STUPID TOY/CHINA DOLL AGAIN.” Some levels also felt almost impossible to 3-star without taking advantage of the “rescue” ads. We would often just keep putting off completing a level just so we could be sure we got the three stars. Even the times when we cleared a level with just 3 moves we often only got 1-2 stars. Luckily the gameplay is so fun I’m able to overlook these minor annoyances.