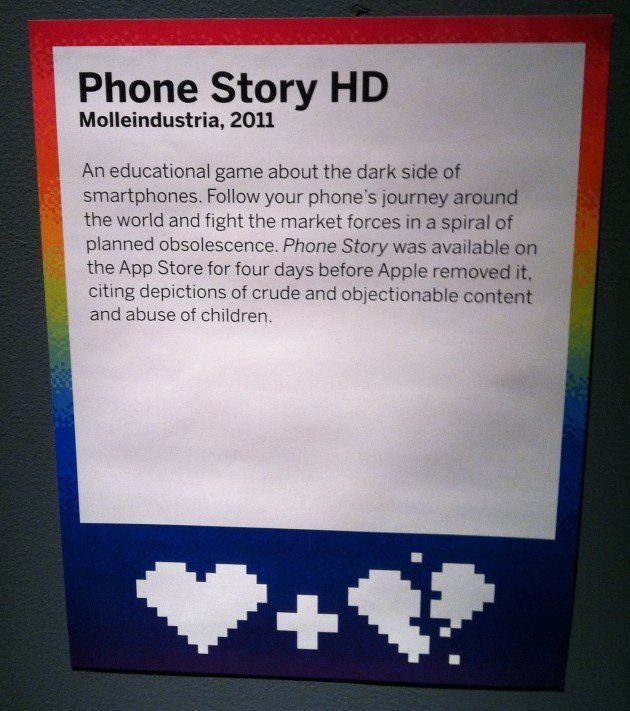 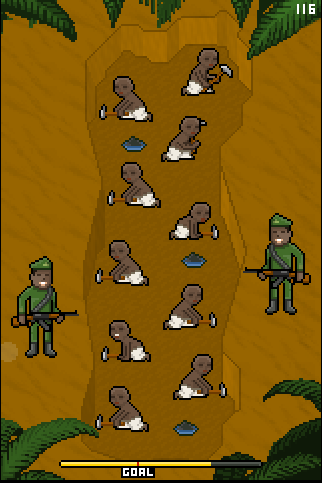 During IndieCade East 2015 a little while back I came across a game that actually floored me. Phone Story.

Let me go back a bit. IndieCade East has a tradition where they show off games that have been shunned by greater gaming press, the market place and even society for being too risky or outright offensive.  This is the Rejection part of their interesting: The Love & Rejection Exhibit. (I’ll get to some love games later)

As part of the Rejection side of the exhibit Phone Story was a bit low key. A lone android phone with head phones attached and a game running. The nameplate even seemed innocent enough.

“An educational game about the dark side of smartphones….” Blah blah

It seemed innocent enough and pretty boring. But as I waited to try the VR games nearby I tried it. For the next few minutes I was treated to weak controls and shocking game play.
The first mini-game had me moving armed soldiers to point guns at slave children to motivate them to dig up Coltan faster. I sort of knew about Coltan before. I remember glancing at some stories a while back saying most of the important metals we need come from some hell hole in Africa that is war torn and we are feeding into it. Still, these stories just didn’t connect with me. I figured it was just another screwed up thing and moved on.  Here, I was pointing the gun to make kids dig. All of a sudden the news stories felt real to me. Wow.

Next I was catching Foxconn workers with a blanket to stop them from killing themselves (another story I previously heard and dismissed).  I chuckled a bit at the sheer wrongness that was happening while struggling to make the controls work. It then struck me that I was playing the game on a phone that most likely was made at a factory like Foxconn.  It took a few tries but I was able to save a majority of these workers. Then the phone died right when I moved on to the next area. I wanted to know more. I really was intrigued. I took some snap shots of the name plate to remember to come back to this.  Afterward I went back to enjoy the rest of IndieCade and realized there were a hell of a lot of mobile phones there. 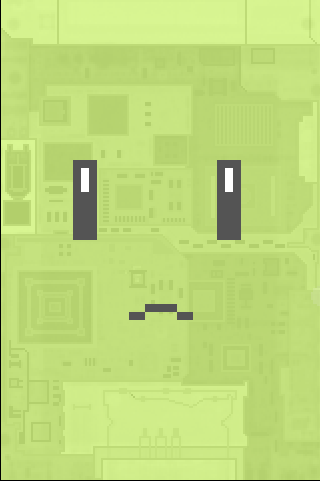 There were a lot of other Rejection games being exhibited. Some were mostly about sex or others seemed to try too hard with violence. But Phone Story was the most relevant game for IndieCade Itself.

Today I finally remembered to look up that interesting game and played through it on the official website. While sadly shorter than I would have liked the game was still interesting. The controls also worked better with a mouse.

I found out the team behind Phone Story donated all of the profits earned from the game to a Foxconn worker who attempted suicide. I am even more floored now.

You can read more about their amazing work helping the former FoxConn employee here.

Phone Story was removed from the iOS app store very soon after release. I’m honestly sort of shocked it was approved. But then again horrible and broken games get put on the app store every week so I guess something like Phone Story just flew in easily.

You can play Phone Story for free here on the official website. You can also download the game for PC & Mac there.  Phone Story is currently available for Google play here for $1.00.  Yes it’s one dollar for a very short game. But I feel it’s worth it to support a developer who pushes boundaries and helps people.

I really hope Phone Story returns again next year at IndieCade. It just fits there.

You can find out more about Phone Story here.