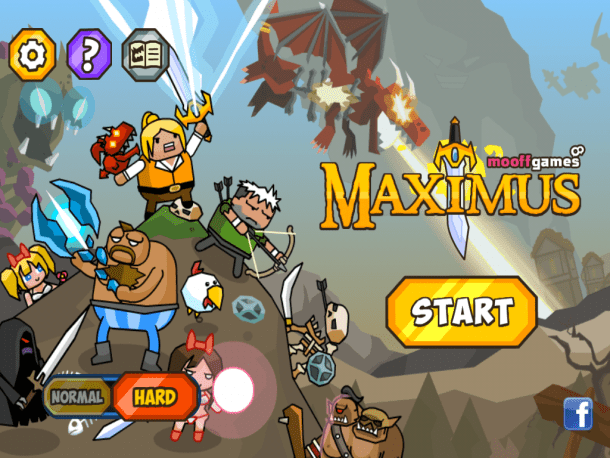 Maximus is a universal app for iOS 4.3 and later. You get the same great experience with all devices. As always, I prefer gaming on my iPad.

If you are a fan of  old school beat’em ups you need this game.

Here is yet another super fun and addicting Freemium game.  This isn’t an easy game, this is a loving homage to old school arcade beat’em up’s.  If you grew up on Golden Axe, Streets of Rage, Double Dragon, and TMNT Arcade game this game is for you.

Maximus is a beat’em up with absolutely everything. RPG like leveling, gambling, battle mounts, battle pets, unlockable difficulty modes, epic bosses, and even a funny plot.  Maximus is an amazing game.  To make it even more impressive Maximus is free.  Yes this is Freemium at its best. 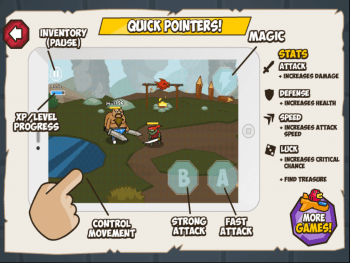 The controls are great.  Button spacing and response is great.  Most of the stats you will ever care about are upgradeable.  Slightly expensive, but then again hey its free and the developer needs to make money here somehow.

The levels themselves aren’t very long, but they all end with a boss fight that will always be Challenging.  All the bosses are beatable, but good lord can some of them be frustratingly tough.  Prepare to die, a lot.  Each boss has a weakness you need to discover.  Sometimes you can just hammer through them and others you will need to take advantage of just the right opening.

The general enemies are no pushovers either.  Coming at you sometimes in heavy waves, you will need to be able to get used to saving your special attacks for just the right moments if you want to make it to the bosses with enough health to get through the stage. 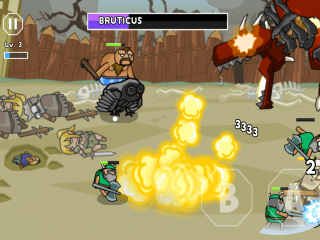 You have the choice between four different characters that each control pretty distinctively.  To get through the adventure before you will need to depend on collecting or buying gold to upgrade your character.  Random weapon, armor and battle pet drops also help out a lot.  An Interesting addition that can help or hurt your chances in game is the gambling system.  You can use your in game currency in a slot machine located in the pause menu and hope for the best.  Here you can get pretty much everything.  New weapons, armor, XP, gold and even the battle pets.  In fact this is the only place I have been able to get my battle pets.

I only have two battle pets so far.  A chicken that seems to be totally useless and a green blob thingy that orbits around my hero and inflicts a good bit of damage on any enemy it touches.  I love my blob.

The art and music are definitely amazing.  The art might seem childish and quirky, especially the story panels in between levels.  But it really all adds to the charm of the game.  The music is just great.  Maximus really is a total package for old school beat em up fans.

The bear mount does piledrivers to the bad guys.  Even the final boss.  Its epic.  It’s amazing.  Seriously, when you get the bear mount you feel ten times more awesome.

Again, there is a bear that can be your mount in game…that does piledrivers to enemies.  You can piledrive a dragon that’s way bigger than you are. 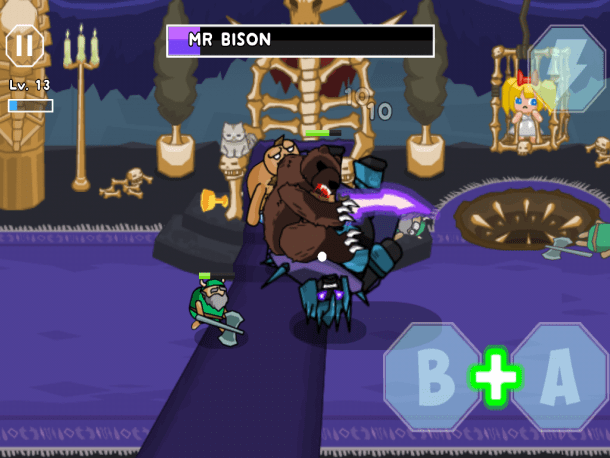 Maximus keeps the level short and the action fun.  Things never drag on more than they have to.  The bosses are what bosses are supposed to be, touch, cheap, intimidating and doable.  Sure a few of them might make you cuss more than you would like, but in the end you feel like a champ when they are dead and you saved the day.

Maximus comes with tons of content and its all fun.  I’ve spent afternoons just gaining tons of money and losing it all again in the Boss v Boss mode.  All you do is watch bosses fight each other placing bets on who you think will win before hand.  It sounds boring, but with your last few hundred gold on the line trust me it’s pretty intense and addicting.

I love that the characters feel different.  I love that the game has an awesome sense of humor.  Most of all I love that this is on the iPad, not some arcade someplace.  Because if it was it would be devouring my quarters.

*UPDATE They added a coin doubler that I bought instantly.  Totally worth it!!!

That said it is darn nice that you don’t need to buy anything in game.  Everything is unlockable.  Maximus is another example of Freemium done right.

I hate that I can’t dismount whenever I want.  There are times I am on a mount that I feel is just holding me back.  The worst part is if you play endless arena mode the mounts that you don’t want don’t disappear when they spawn.  They just become another obstacle that you try and dodge.

In game gambling has never been more fun.