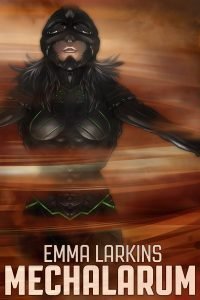 Strong heroine Kiellen risks slow death for the power of biomechanical flight in a post-apocalyptic wasteland full of secrets.

Looking for a fun read to cozy up with as winter moves in? Mechalarum is going FREE on Amazon today (November 21) through November 25.

To celebrate, I’m going on a blog book tour! Click here to see the list of events. You can also enter to win one of five signed paperback copies (no purchase necessary).

Here’s a short snippet of story to give you a taste of this unique scifi world.

Kiellen woke with a jolt that set her bunk to swaying in its stays. The familiar surroundings of the trainee quarters did nothing to soothe her panic. Her sheets clung to her skin, slick with lukewarm sweat.

She’d dreamt as usual about fighting off the invading Losh. This time, however, her flight patterns had been erratic, influenced by outside forces she couldn’t see or combat. Instead of succeeding, she’d been forced to watch, paralyzed, as the offworlders laid waste to the Citadel around her, consuming the city in flames and reducing her world to rubble and ashes.

Usually Kiellen managed to wake before reveille, with plenty of time to prepare and escape before the rest of her classmates stirred. Today, after a fretful night’s sleep, she found herself in the midst of a bustle of activity as she leapt out of bed. She centered herself, shaking off the dark visions and the sudden remembrance of her probation in favor of looking forward to the day’s training tasks.

Kiellen hurried to the door of the smokeshower cleanroom, nearly tripping over a cleanerbot refreshing on a charger pad. The bot unpacked itself, then returned to its spherical form when it realized it wasn’t needed.

A waiting chute accepted Kiellen’s deposit of clothing. She grabbed a respirator, attached the filterfabric to her face, and pulled open the cleanroom door.

Despite the respirator, she caught a hint of the smell of burning creosote. The smokeshowers sprayed a powerful cleansing and disinfecting mixture of herbed smoke and particalized water, scouring the pilots as they passed through the corridor. The hydroabsorbers collected and filtered the offspray, recycling and returning it to the cistern for reuse.

Kiellen chucked the respirator into a waiting bin as she exited the corridor. She grabbed a robe, slipshoes, and undergarments from a rack, then jogged at a healthy clip through the wide, low passageway and out of the barracks. A waiting rack offered dense nutrient loaf and jars of replenishment fluid, and she paused briefly to gather her rations. 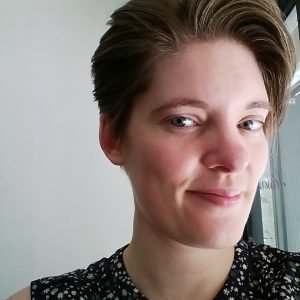 She writes accessible scifi that teases the edges of your imagination without making you feel like your brain has gone through a blender. Her characters face the world with wry humor, even as it comes crashing down around them. Her stories are filled with action and adventure. After all, what’s the point of a tall tale if it doesn’t make your heart race?

Stop by her Twitter to learn more, or just say hi!