What’s Hot at Redbox: The Nardio Review of  Mirror, Mirror 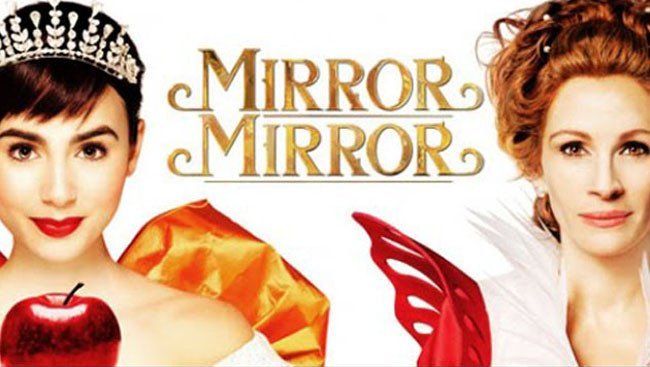 What Should I watch it On?

We watched Mirror Mirror  on Blu-Ray. Considering all the contrasting, bright colors, I would stick with Blu-ray.

probably would have been better as a Made-for-TV Disney movie. It reminds me a bit of the mini-series 10th Kingdom, just not executed quite as well. It is a very visually appealing movie with lots of bright colors, it just falls short from being truly exceptional.

Lily Collins is great as Snow White. She’s gorgeous and she just gets prettier throughout the movie once she gets out of that hideous dress in the beginning. I felt like Julia Roberts kind of phoned in the acting on her part, but at least she looked as though she was having some fun. I love the use of color in the movie. Outside of the castle everything is either white or a drab brown, making the bright colors of Snow White pop even more. Some of the effects were pretty cool too. I loved the little stop-motion puppet animation in the beginning when the “narrator” was going over the events prior to the start of the actual movie. I also enjoyed the one really imaginative scene in the movie, but there’s no follow-up. I was expecting from that point onwards to really push the envelope, but nothing really happened. At the end there’s also a fun little Bollywood-esque number during the credits.

I know it’s supposed to be campy fun, but the humor just falls short. The chemistry between Lily Collins and Armie Hammer (The Prince) is sorely lacking. Julia Roberts tries far too hard. The storyline is so-so. Considering all the re-imaginings of this story, I have to say that is the most disappointing. There’s hardly any charm and the only one that does exude it is Lily Collins. Unfortunately the script just falls flat and even a gifted actor can’t show off their skills with a bad script. I get that it’s a family-friendly movie, but it may have been better suited in a TV format.