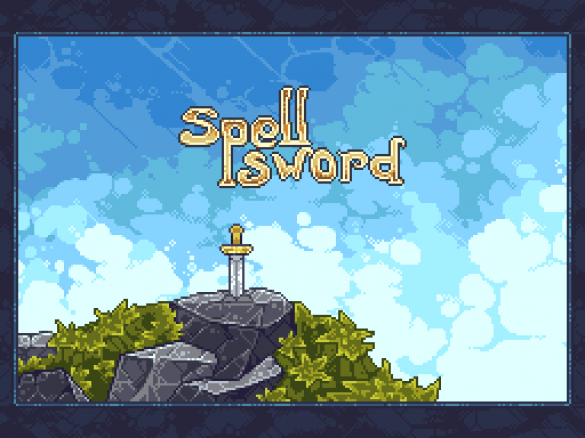 Whatever you can get your hands on!

In my opinion Spell Sword is best played on the iPad but it is totally enjoyable on the iPhone/ Touch. The main reason I prefer it on the iPad is there is so much chaos and gem grabbing action I honestly feel to really play this game you need to be able to see and appreciate everything and the iPad’s screen is perfect for it. 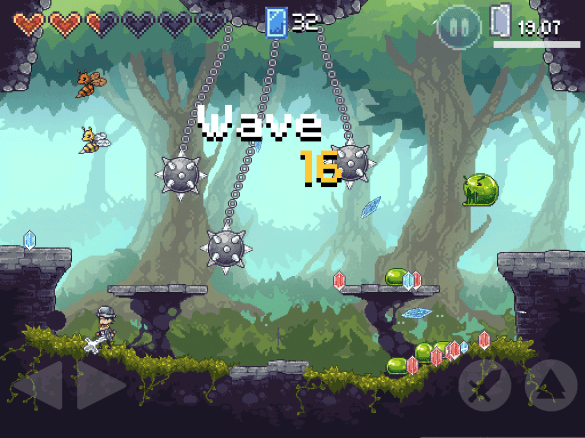 You have 4 game play areas.  You have 120 different kill, survive, gather or use this ability like so or do this objectives in each.  It didn’t sound like much…then I started playing…then apparently it was six hours later. There’s also endless modes for all three areas, each with three different difficulties, all the power ups to master, skill upgrades that need upgrading, new necklaces and rings….It’s just classic arcade game like fun. 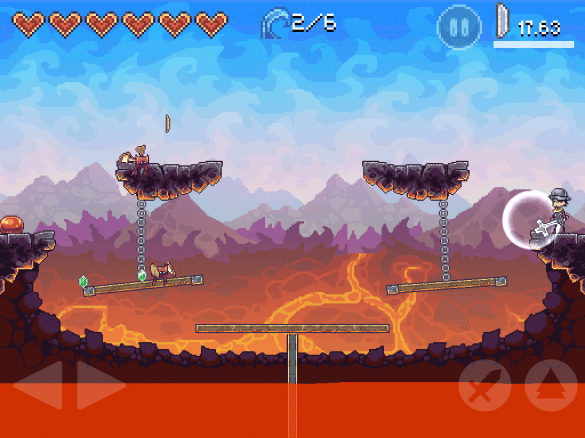 Great! Spell Sword has some of the tightest 2D controls I have enjoyed on the iPad. The character animations are all unique and really give each Spell Sword ability their own look and feel.  There is no lag whatsoever on my iPad 2 or iPhone 4. If it had any this game would fail, it is just too fast.  The music is fast and sticks in your head long after you have stopped playing, the camera is fixed so it never gets in your way.

The game is all about paying attention.  Then upgrading, upgrading and upgrading some more.

Dead simple controls that are spot on.  That’s great because this is a challenging game.  I can’t stress enough how often I have died in game.  This is not for the easily frustrated, this is for the gamer who is looking for a rewarding challenge that just doesn’t let up.  There’s a surprising amount of depth for such a simple game. Different Spell Sword cards offer different skills and gameplay. There’s a ton of replay value. Then you have random gear drops, endless modes to test yourself and the ability to upgrade your Spell Sword attacks, rupee drops and the duration of your Spell Sword powers. I have to say it really feel like the developer thought of everything.

Honestly in the beginning I was dying pretty fast. It was like an old school arcade game and it had my full attention. Soon I was lasting longer and longer…and then I discovered the items button in the main menu and found out I could upgrade my items and everything else!  Boom, addiction born.  A few hours later I was a killing machine!  Spell Sword’s upgrade balance is good, little by little you notice how much stronger you are getting.  And the incremental hat, necklace and ring upgrades really helped me live longer and longer.

There isn’t a story here, just a few funny intro quips from the main character, honestly as great as this game is there doesn’t have to be one.  You’re not playing this game for some massive questline, you’re playing because it’s so darned fun. This reminds me of something in a classic arcade.  I really feel like I owe my iPad two hundred bucks in quarters.

Part of the Spell Sword Store

How not to go Freemium…

Before the newest update the answer was zero.  I purposefully didn’t review the gamer sooner so that I can play through the new content and see what the effects of the update were.  Besides all the great new content unfortunately Spell Sword going Freemium has created quite a few problems from a previously perfect in app purchase free game.

The newest update burned a lot of early Spell Sword adopters.  Spell Sword turned freemium after being sold for months as a game with no in app purchases. For a lot of gamers who were sick of in app purchases this was great, a real quality game that wasn’t pay to play. The leaderboards were about skill and you were able to unlock every single item in the game by earning it….. That’s over now.

In app purchases were added, the price went to free and the sword seems to have shrunk a bit. A bunch of less useful cards were also added to the game. This really sucks because all of the cards before were really useful and helped the game move at a very frantic pace. Now it’s about burning time and surviving while waiting for a good card to show up.

Gone now is the ability to be able to earn or buy most of the items with in game currency.  Now it seems it’s harder to collect gems. The new currency ”Dragon  Coins” added into the game are very hard to get.  Spell Sword Dragon Coins also have the annoying tendency to drop through the floor. To get past this you can now buy a currency doubler.  Buy the regular and new currency.  The really annoying part is without buying the doubler, or just straight up buying currency you will never be able to farm enough gems to buy some of the new best items. Why are there items that cost 1,000,000 gems?  Really? What could possibly be my motivation to spend an additional 12 dollars to get an item in the game? Adding this has pretty much destroyed the idea of the leader board. It really just pisses off fans who bought the game before and where able to save for pretty much everything and earn whatever couldn’t be bought.

This shouldn’t have been done this way.  Everplay should have released a separate freemium Spell Sword app.  With the separate freemium version they could have implemented whatever currencies they wanted and kept the original game balance.  The early adopters who have already paid for the game should have gotten all of the new items without the insane prices that demand a real money investment.

What really burned a lot of early adopters, myself included was the update rolled back a lot of the upgrades we already paid for with the in-game currency. In other words they removed a lot of hard earned player progress.  This just feels like a harsh cash grab. It really stinks to see a lot of my progression just thrown out. The Spell Sword pictures below show where I was before the upgrade and where I was left after the upgrade.  Actually I was worse off, and I worked to get back to the point you see below.  What’s really galling is seeing the bright glowing “Get MORE” store link next to where they robbed me.. 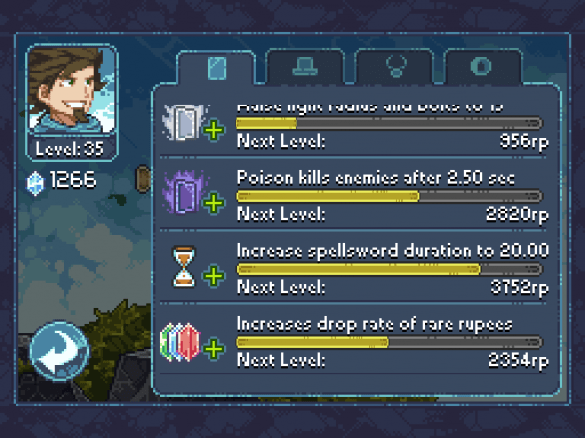 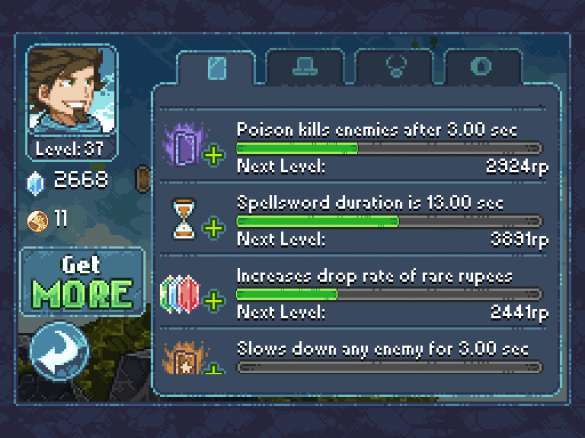 I feel by going this route Everplay has hurt its brand by treating the customers who took a chance on them this way.  The saving grace here is the game is still fun for the most part. Also for diehard fans like myself, there are more levels to fight, more baddies to kill and more items to unlock.

Even with all of my issues with the recent update to the game I still recommend downloading this game.  It’s still very fun, with tons of replay value. Best of all now, It’s Free!

You owe it to yourself to get this game.  If you are an old school beat em up fan, or someone who would spend endless hours and quarters in the arcades hooked on high score fast action fun, buy this game. This is the next addicting time killer for you.

With the gameplay, world, and character the developer has created I honestly see no limits on this franchises potential.  This could easily become the next Metroid or Mario. Imagine boss battles, or Castlevania like worlds to go around in. Everplay Interactive has gold in their hands. I really, really hope they use it wisely.

Download this game for yourself, and then gift it to your friends.

Tips and Pics below: 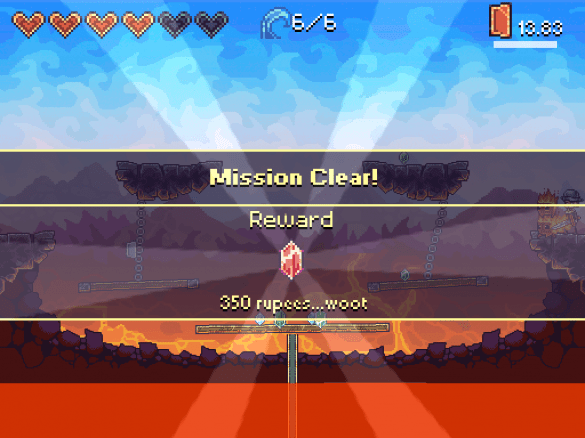